Presbytery of the Palisades

Putting the Theos in Theater in Jersey City 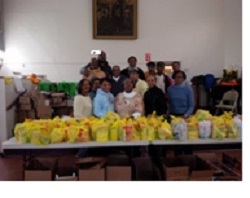 Volunteers with pastors Willie J. Keaton (third row, second from left) of Claremont-Lafayette and Gloria Tate (front row, center) of Teaneck Presbyterian with the turkey dinners to be donated

Claremont-Lafayette United Presbyterian Church in Jersey City, New Jersey, is united in many ways, beginning with the unification of two separate congregations many years ago. More recently, the congregation has discovered the unifying effect of drama in this predominantly African American community.

In fact, two plays the congregation recently put on, The Imperfect Women of the Bible and Raisin in the Sun, raised money to help others. With help from Teaneck Presbyterian Church, 130 turkey dinners were assembled and distributed to needy people in Jersey City.

Through the church’s new House of Theos drama ministry, the congregation hopes to put on productions with drama and dancing. Director and volunteer Celeste Shaw is looking to create an after-school enrichment program as well.

“The drama ministry is so important because it helps us to reach an audience we might not reach on a Sunday morning,” said pastor Willie J. Keaton Jr.

Keaton, who is earning a doctorate in ministry from Drew University, is also a playwright. His opus has not been performed yet, but he did a reading at a Philadelphia library.

“That was my whole dream, even before coming to Claremont-Lafayette,” said Keaton, who previously served a Philadelphia congregation. “My question has always been: How are we going to reach the younger generation?”

Sunday mornings are getting more crowded at the century-old church, with the addition of new members. The church also hopes to hire a youth director.

“I do sense the life of the church, and it’s in a good place right now,” said Keaton. “God will continue to bless.”

Gracious God, thank you for giving us gifts to share and strength to serve you faithfully. Amen.