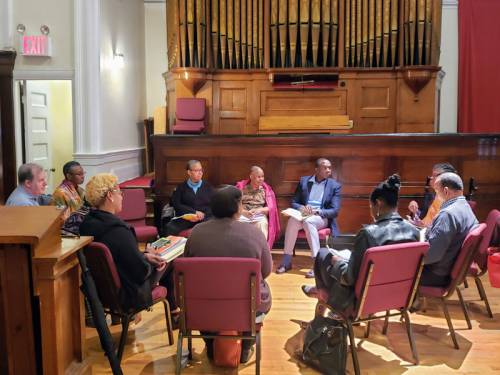 When more than 50 people representing 31 congregations gathered to prepare for the Presbytery of New York City’s launch of the Vital Congregations initiative, the Rev. Robert Foltz-Morrison, the executive presbyter, felt the Spirit moving.

Foltz-Morrison and an advisory team had prayed that one-third of the presbytery’s congregations would participate in the two-year Presbyterian Mission Agency initiative, beginning this month.

After speaking two years ago with the Vital Congregations coordinator, the Rev. Dr. Kathryn Threadgill, he said he felt that the approach denominational leaders took — one of walking with presbytery and congregational leaders in intentional efforts of revitalization — was the right approach.

“I saw it as something valuable, but the previous readiness wasn’t quite there,” Foltz-Morrison said.

But then, he said, thanks to God’s readiness, everything began to sync.  Chosen as one of 14 presbyteries to participate in the first wave of the national Vital Congregations launch, Foltz-Morrison and the advisory team began telling congregations in the presbytery about the initiative.

They spoke about how the initiative would help congregations build authentic relationships of faith, as they worked together on the initiative’s 7 marks of congregational vitality. Having previously worked in redevelopment ministry, Foltz-Morrison knew how important each of the practices (marks) are in congregational life — and how working on the marks in relational cohort groups that meet monthly would help congregations honestly assess where they are. The work would also help them discern the movement of the Spirit and the new thing Christ is doing in their midst.

“What makes this initiative unique,” he said, “is that we train local facilitators instead of having consultants come in and out. This will help in building relationships of love, trust and support.”

When the facilitators received Vital Congregations training in Baltimore in August, Foltz-Morrison noticed how valued and honored they felt. Ready to begin their preparation, they met with the pastors and elders from the 31 congregations in October, introducing themselves to their cohort groups, which are being clustered in four of the city’s five boroughs: the Bronx, Brooklyn, Manhattan and Queens.

“Each of the cohort groups know their neighborhoods and have relationships,” he said. “But at that first meeting, they felt a different kind of support, knowing they all would be working at revitalization together in each of their boroughs over the next two years.”

The cohort groups are: :

Creator God, remind us that we are called to collaborate, so that all may share in your abundance. Amen.