Share God’s love with our neighbors-in-need around the world through One Great Hour of Sharing.
Make A Donation Click Here >

Golden Rule 2020: a call for dignity and respect in politics

Jesus’ command to ‘treat others as we would like to be treated’ should also apply to political discussions, group says

Do you find yourself wishing political leaders would speak more respectfully to one another as they share their perspectives on important issues?

The National Institute for Civil Discourse is coordinating a yearlong effort — leading up to the 2020 national election — to pray for the healing of divisions in the United States and to promote use of the Golden Rule in politics.

On Sunday, Nov. 3, exactly one year before the national election, Christians from across the theological and political spectrum will emphasize Christian teachings about human dignity and, in particular, Jesus’ command to “treat others as we would like to be treated,” which also applies to political discussions. 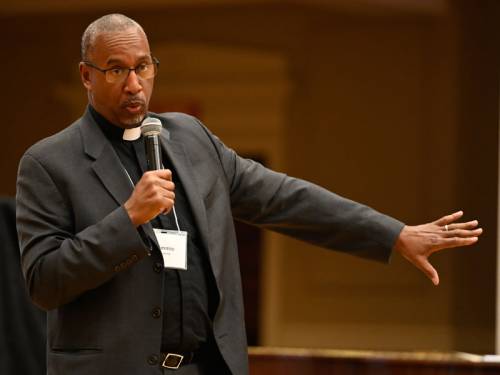 Together with other Christian leaders, the Rev. Jimmie Hawkins, director of the Office of Public Witness is working to combat the incivility and division in U.S. political discussions through Golden Rule 2020, based on Matthew 7:12. (Photo by Rich Copley)

The idea for “Golden Rule 2020: A Call for Dignity and Respect in Politics” grew from a meeting last May, hosted by the National Institute for Civil Discourse at New York Avenue Presbyterian Church in Washington, D.C. At this gathering, the Rev. Jimmie Hawkins, director of the Presbyterian Church (U.S.A.) Office of Public Witness, and 20 other Christian leaders came together for two days to discuss how people of faith can work together to combat the incivility and division in the U.S.

“It is our hope that Golden Rule 2020 will enable people of faith around the world to apply tolerance, love and acceptance in our political engagements,” Hawkins said. “We are united by faith and our common humanity, which overcomes any divisions between us.”

“This is the time when we must put forth our better selves and endeavor to make the world a better place for the children of the world,” Hawkins said. “We have so much to offer when we stand for that which is greater than ourselves: the love of God within.”

Congregations will participate in a wide variety of ways, including special readings and prayers, Sunday school lessons, use of a short liturgy, information about Golden Rule 2020 in bulletins, sermons on the need for dignity and respect and suggestions about how church members can apply the Golden Rule to political discussions.

Those who helped create “Golden Rule 2020: A Call for Dignity and Respect in Politics” represent a range of denominational and organizational partners, including: Presbyterian Church (U.S.A.), The American Baptist Churches U.S.A., National Association of Evangelicals, The Episcopal Church, The Ethics and Religious Liberty Commission of the Southern Baptist Convention, the Evangelical Lutheran Church in America, Mormon Women for Ethical Government, the U.S. Conference of Catholic Bishops and the National Council of Churches.

“In the year leading up to the 2020 national election, we want millions of Christians — as well as others who value the Golden Rule — to do their best to follow these principles as they interact with others they disagree with,” said Theo Brown, director of faith-based programs for the National Institute for Civil Discourse. “If enough people do this, it can have an impact on the political climate and make civility more of a central concern.” 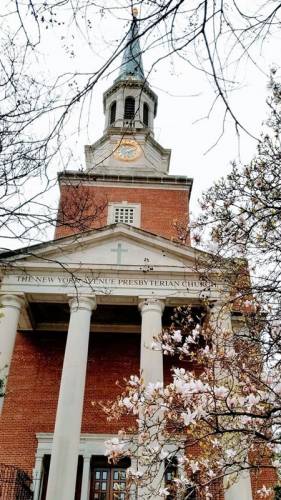 New York Avenue Presbyterian Church in Washington, D.C., hosted a meeting of church leaders in May that led to the creation of Golden Rule 2020, a yearlong, faith-based effort to follow Jesus’ command to “treat others as we would like to be treated” in all areas, including politics. (Photo by Rich Copley)

Brown, a member of New York Avenue Presbyterian Church, which is just blocks from the White House, said it saddens him to watch the political news, both because of specific events taking place and because of how he sees people on different sides of issues talking past each other. “I also feel worried about the future and feel that we are headed for some very difficult times if we can’t heal the divisions we face now in our country,” he said.

“Golden Rule 2020 is urgently needed because the incivility and polarization in our country has become so great that it threatens our future,” Brown said. “We will never be able to solve our common problems if people of different political views are filled with anger and contempt for each other. The message of Golden Rule 2020 is that the teachings of Jesus offer us a way out. If we follow the Golden Rule and treat our political opponents with more dignity and respect, then we can begin to de-escalate the hostility and look for ways to work together.”

The Christian leaders who created Golden Rule 2020 believe a large nationwide activity involving Christians of many different denominations will call attention to the fact that how we treat our political opponents is a moral issue.

“Churches have an important role to play in helping to heal America,” Brown said. “We hope and pray that local congregations will be active in efforts to increase understanding and bridge divisions in our country between now and the 2020 election.”

Christian leaders say they’re certain that reviving civility will “take a village.” Congregations and organizations can join in this effort and access resources or come up with their own ideas that work best in their faith communities. Sign up to support Golden Rule 2020 and to receive additional information to promote civility and respect in your community.

The nonpartisan National Institute for Civil Discourse, based at the University of Arizona, was established in May 2011 after six people were killed and 13 others were wounded during a “Congress on Your Corner” open meeting in Tucson. One of those wounded was former Congresswoman Gabby Giffords. NICD encourages debate, research, education and policy generation regarding civic engagement and civility in public discourse consistent with First Amendment principles.

O God, please remind us to treat others as we would like to be treated. In Jesus’ name we pray. Amen.