Refugees and migrants are at the heart of the mission and calling of Protestant churches in Italy. The geopolitical position of Italy in the Mediterranean Sea has made it one of the European countries most involved in the dynamics of migration.

People talk of more than 40,000 deaths via border crossings in the past two decades, nearly 20,000 of which have taken place since 2014, according to the Missing Migrants Project. These numbers make the Mediterranean migration route among the most dangerous in the world.

Faced with a phenomenon of this magnitude, Protestant churches have taken a clear and decisive position within the Italian and European landscape to defend human rights for all: a right to migrate, to seek out better living conditions for oneself and for one’s loved ones; a right to protect human life and to be saved from danger, because “A Samaritan […] saw him and had compassion for him” (Luke 10:33); a right to a decent life, in which it is possible to move in a safe and legal fashion via regular channels; and a right to be heard, according to the gospel calling: “I was a stranger and you welcomed me” (Matthew 25:35).

The choice to stand up for the human rights of refugees and migrants has imposed itself on the collective conscience as a gospel response to the call to “love our neighbor” (Luke 22:39), and to see Christ in the other, “For as much as you have done this to the least of my brothers, you have done this to me” (Matthew 25:40).

The Federation of Protestant Churches in Italy (FCEI) launched Mediterranean Hope — Refugee and Migrant Program (MH) in 2014. This Christian response to the migration crisis occurred in the wake of the shipwreck on Oct. 3, 2013, when 368 people died a few miles off the coast of Lampedusa, a little island in the heart of the Mediterranean. 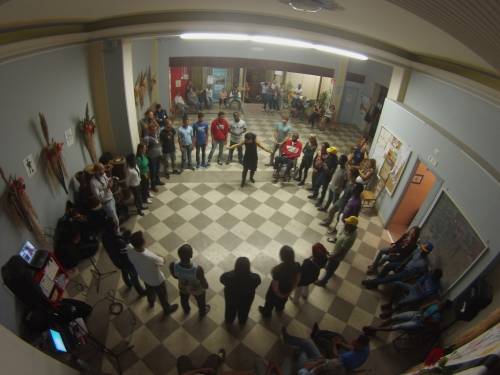 A dance workshop with refugees, volunteers and social workers is held at the House of Culture, a reception center of Mediterranean Hope in the town of Scicli in Sicily, Italy. (Vibes, Beckwith Video Studio, Property of Waldensian Church in Italy)

That experience and others were documented by the Mediterranean Hope Observatory, which gave churches the chance to know what it is like to be on the front line. In a related project incorporating work undertaken in Sicily at the House of Many Cultures and assistance and advocacy in Rome, MH developed its Humanitarian Corridors project.

There are three trends worth reflecting on through this MH project: externalization of the borders, criminalization of acts of solidarity and the “illegalization” of migrants — the majority of whom arrived on Italy’s coasts from Libya, a country in which the political crisis has intensified and where human trafficking has become the principal business of criminals and militias. In 2018, the United Nations Human Rights Office of the High Commissioner condemned the “unimaginable horrors, serious violations, atrocities and abuses” suffered by migrants and refugees in Libyan detention centers, declaring it to be an unsafe country. Our experience on the front line on Lampedusa has confirmed this, through the words and marks on the skin of people traumatized by inhumane violence. These testimonies have heightened criticism of the accord, signed in 2017 between Italy and Libya, to manage immigration and control the borders, delegating the task of bringing back boats heading for Europe to the Libyan Coast Guard. Added to this scenario is that of criminalization of nongovernmental organizations that in recent years have undertaken search and rescue missions, saving the lives of tens of thousands of people making the highly risky Mediterranean crossing.

Protestant churches have been willing to expose themselves with courage and are equipped with gospel vision for the future. One of their greatest strengths has been the Humanitarian Corridors project, which is enabling the arrival in Italy of 2,000 vulnerable people from Lebanese refugee camps through a safe and legal system of humanitarian visas. This has become a model for other countries in Europe. The idea stems from the need to contend with the Libyan crisis and with the block on search and rescue in the Mediterranean, sharing a common course of action and responsibility among European countries. For Italian Protestants, it is the model of the mustard seed, sown with the Humanitarian Corridors tested out in Italy, which we hope will produce a large, robust plant that upholds the human rights of all.

Marta Bernardini, Leader of the Mediterranean Hope project in the city of Palermo and in the island of Lampedusa, Sicily

Revised Common Lectionary Readings for Monday, January 6, 2020, the Epiphany of the Lord (Year A)

Today’s Focus:  Standing up for Refugees and Migrants

Almighty God, in a world that seems filled with hatred and violence, we give you thanks today for opportunities you give us to build better relationships, do justice and be witnesses of the reconciling love we have known through the grace of the Lord Jesus Christ. Amen.