Young Adult Volunteers reflect on their year of service in Scotland 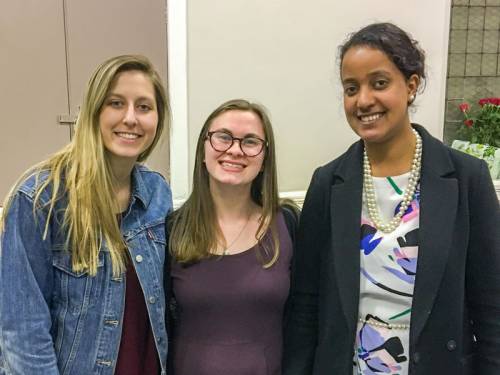 Kris Scharstein and Helen Richardson attended their first Coptic Orthodox Easter at the invitation of Essaye (right) and Kaberti (not pictured), who are friends met through Bridging the Gap. (Photo courtesy of Helen Richardson)

Around this time last year, we met with a representative from Faith in Community Scotland (FiCS), an organization giving refugees and asylum seekers a platform to speak about their challenges and the treatment they had received from the United Kingdom’s Home Office. As newcomers representing the Young Adult Volunteer program in Scotland, we were excited to learn more about migration in Glasgow and the United Kingdom. The representative began our meeting with this sobering truth: All of the invited migrants refused the invitation because of their vulnerable status. In the parishes where we were accompanying the Church of Scotland, we were privileged to work with organizations attempting to bridge race, class and citizenship status.

We heard firsthand stories of local Scottish people alerting migrant families in advance of surprise deportation raids, which may have meant facing death in home countries for some asylum seekers. FiCS supports refugees and asylum seekers by lifting their voices, challenging the narrative that being “foreign” or living in government-provided housing is somehow “less than” or wrong. Organizations like FiCS show people that making connections and relationships with all people is the way to break barriers of race and class and bring the kin-dom of God on Earth.

A local charity, Bridging the Gap, opened a weekly drop-in to create a space of welcome, where new asylum seekers and refugees felt heard and valued. Initially only for asylum seekers and refugees, Bridging the Gap eventually opened its doors to the entire community. This space became vital to challenging the view of asylum seekers and refugees as “other” or as competition for jobs and housing in the community. Stories and experiences shared between long-term residents and newcomers created relationships and friendships that deepened understanding, reminding folks we all have something sacred to offer if we’re open to receiving it. From conversations at the drop-in, we learned about the challenges of navigating the asylum process: the paperwork involved, accessing health-care services, and the worry surrounding whether people would be allowed to remain in Glasgow. A mother once said that even the positive moments carried heaviness and sadness. For example, finally gaining refugee status meant having the right to work, but refugees rarely work in their trained profession because of language and certification barriers.

In that meeting last winter, we learned that a group of refugee and asylee women claimed the Glasgow tourist slogan, “People Make Glasgow,” as their own. And it was certainly true for us. We learned radical hospitality, resilience and how to keep hope. Despite the messages our identities sent as white North Americans and the many challenges faced by migrants, we were welcomed to our first Coptic Orthodox Easter, received dinner invitations, were gifted with friendship and were trusted to listen to personal migration stories. For us, “People Make Glasgow” illustrated how these experiences and friendships would continue to transform and convict us and Glaswegians, long after we left.

Good and great God, thank you for the gift of Young Adult Volunteers in our church. Please stay with them as they share your love around the world. Amen.