Atlanta podcast hosted by PC(USA) minister is growing ‘like crazy’

Up to 1,200 listen each day, including one person who says the Aijcast podcast is her ‘lifeline’

Church-going or not, Americans are finding spiritual inspiration through podcasts.

In fact, according to Buzzsprout.com, 49 million households across the country listen to religious podcasts. 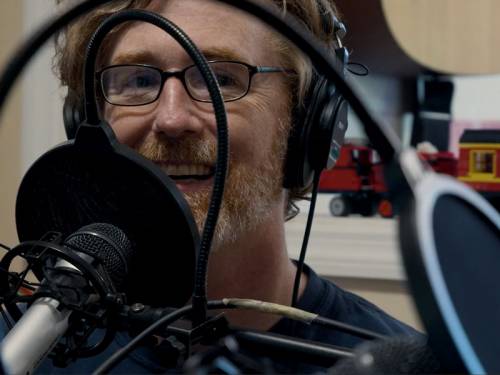 The Rev. Marthame Sanders is producer and host of Aijcast, a podcast featuring podcasts at the intersection of art, inspiration and justice. (Photo by Mike Fitzer/Film 180)

One of those, Aijcast,  is hosted by a Presbyterian Church (U.S.A.) minister, the Rev. Marthame Sanders. The podcast began as a church plant, as Sanders had a sense of call to work with artists and bring them together.

“The community piece is really interesting,” Sanders said, “because a lot of the work I’ve done is kind of one-on-one in small groups — and then putting it out online as a podcast.”

And the audience has grown fast — it’s now up to 1,200 listeners a day. Sanders has never preached to an audience that large in all his years in church.

What Sanders has discovered is that artists, even those who are secular, have a desire to connect with something bigger than themselves — to be part of something that points toward justice.

He says he has followed God’s lead and the Spirit’s nudging.

“People are already listening to podcasts,” he says. “If we’re embodying Christ’s very self, we should be in those places, too.”

The Rev. Nikki Collins, coordinator of 1001 New Worshiping Communities, says Sanders’ ministry is a bit like that of Presbyterian minister Fred Rogers, who put goodness and light out there for years on his television show for children, “Mister Rogers’ Neighborhood.”

A full-length feature film on Rogers’ life, “A Beautiful Day In The Neighborhood,” starring Tom Hanks, was released in theaters nationwide in November.

“He really didn’t know what would happen with his television show,” Collins said. “But look how God used his witness to bring hope and transformation to generations, through ‘Mister Rogers’ Neighborhood.’”

Like Rogers, Sanders says he has been convicted by a call as a person of faith to explore where the Spirit is at work in the world while remaining tethered to the church.

“We’ve lost sight of it, but I think that’s the work of the church,” he said, “to find out where God is already at work in the world.”

Recently a young woman came from North Carolina to a live event that Aijcast hosted in Atlanta. Introducing herself to Sanders, she told him, “Your podcast is a lifeline to me.”

Calling that “a conviction straight from God,” Sanders said it reminded him why he’s doing what he’s doing with Aijcast.

“There really is a deep hunger,” he says. “The church, for all the good that it is does in the world, is not meeting this particular hunger. And so we’re finding a way to do that as part of the PC(USA).”

Sanders said he’s grateful for the partnerships he has with the church’s 1001 New Worshiping Communities movement because they see Aijcast as following God’s call to lead the church into a new place.

“Marthame is helping us in the church ask a profound question,” Collins said. “Tethered to the church, what mission will you explore to meet the deep hunger of your neighbors?”

Aijcast began as a church plant and has received support from both the Presbytery of Greater Atlanta and 1001 New Worshiping Communities with Mission Program Grants. Available through the Racial Equity & Women’s Intercultural Ministries of the Presbyterian Mission Agency, the grants support the transforming work of new worshiping communities and mid councils.

Creator God, we thank you for allowing us the opportunity to spread the Good News through many different channels. Amen.