‘This is so SDOP’ 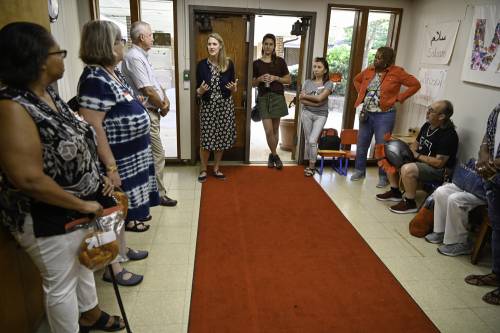 Jennifer Green, director of Refugee Family Literacy at Memorial Drive Ministries in Stone Mountain, Georgia, talked to members of the Presbyterian Committee on the Self-Development of People about the program. (Rich Copley)

The woman from Iraq was dressed completely in black.

It was the first time she had been to Refugee Family Literacy at Memorial Drive Ministries in Stone Mountain, Georgia, in two weeks. When Jennifer Green, director of the program, asked what had happened, she learned the woman’s brother had been killed by a car bomb in Iraq.

So, the teacher passed out paper and colored pencils and said, “Let’s make cards” for their mourning classmate. When the teacher was done, she took her card to the student and said, “I just want you to know I am so sad for you, and I love you, and I’m glad you’re here,” and kissed her on the forehead.

Seven languages came together to deliver a universal message of compassion in this classroom, this community on the outskirts of Atlanta.

That was one of numerous stories members of the Presbyterian Committee on the Self-Development of People (SDOP) heard during a visit to Memorial Drive Ministries, one of several Atlanta-area organizations the group connected with during its meeting in Georgia’s capital city.

While part of their time in Atlanta was devoted to telling people in the Atlanta area how SDOP could work with them in grant workshops and other engagements,  the committee also spent time learning about what is already happening in the Atlanta area. Members engaged with various groups, including the thriving immigrant community of Clarkston, which has a strong connection to Memorial Drive Ministries (MDM); people working for civil rights and justice in inner-city Atlanta; and the burgeoning Korean church community in the area.

“The site visit in Clarkston … is a reflection of the diversity in Atlanta and around the Greater Atlanta area,” said the Rev. Aisha Brooks-Lytle, executive presbyter of the Presbytery of Greater Atlanta. “To have national partners in local ministry engagement and have local ministry engagement to see how they fit into the larger landscape of the PC(USA) was really affirming and life-giving.”

Before a morning panel discussion with leaders at MDM, which is based at Memorial Drive Presbyterian Church, SDOP coordinator the Rev. Dr. Alonzo Johnson told the audience, “This is so SDOP.”

At Memorial Drive Presbyterian Church,  committee leaders and members said they were impressed by how the church is engaging in ministry through housing the many programs there and how it could serve as a model for other PC(USA) churches.

The SDOP visit included a walk-through of several of the ministries’ programs geared toward providing the growing community of people who have immigrated to the U.S. with skills they need to thrive.

In the Refugee Family Literacy program, mothers from a variety of backgrounds can learn English while their children learn the basics in preschool. 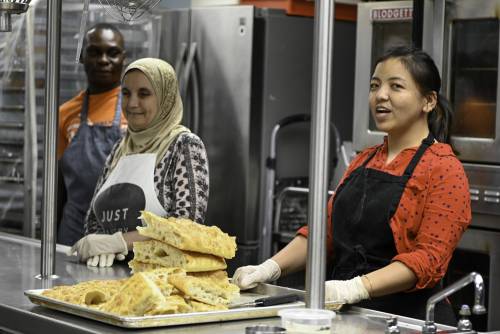 Bhima Thapa of Bhutan and Nepal is the head baker at Just Bakery at Memorial Drive Ministries in Stone Mountain, Georgia. (Rich Copley)

Doris Mukangu,  director of the Amani Women Center, showed the committee the sewing school at the Center, where women learn to sew and make complex garments. The participants learn on industrial sewing machines, preparing them for commercial work. Each graduate of the program receives her own sewing machine, and some have created home-based businesses.

One level down, the committee was ushered into Just Bakery, where a group of aspiring bakers from countries such as the Democratic Republic of the Congo, the Central African Republic, Bhutan and Nepal were creating a variety of baked goods.

Later that afternoon, the SDOP committee bus pulled down a side street in Clarkston, purported to be the most ethnically diverse square mile in the United States because many refugee and immigrant families have settled there.

Invited into a building, committee members gathered with community leaders in the Amani Women Center’s store over a common bonding element: coffee.

While enjoying the coffee, committee members purchased wares created by the Clarkston community, many of whom acquired their skills at Memorial Drive. 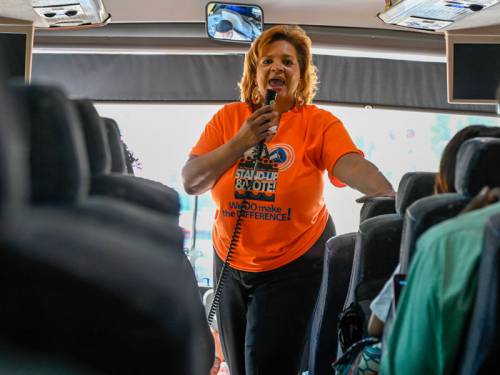 Georgia Stand-Up Executive Director Deborah Scott was a tour guide as the Presbyterian Committee on the Self-Development of People visited Atlanta in late September. (Rich Copley)

The drive back to Atlanta was hosted by Georgia Stand-Up, an Atlanta-based organizing and advocacy group. En route to the King Center, which includes the crypt of the Rev. Dr. Martin Luther King Jr. and his wife, Coretta Scott King, Georgia Stand-Up Executive Director Deborah Scott pointed out sites that illustrated the “Tale of Two Cities” that she says is Atlanta, a city of haves and have nots.

“People are always talking about how bad the kids were,” said Reba Harris of Friends of Collier Heights Park – Women Leading the Way to a Healthy Community, a 2008 SDOP grant recipient. “I said, ‘Let’s stop talking and let’s start walking and do something with the children in the community.’

She told the committee members how the SDOP grant helped them offer health and wellness classes in the community.  The program has grown, with more grants for acquiring skills such as reading, computer coding and robotics.

“We cannot thank you enough,” Harris said.  “You changed our community.”

The committee also heard from DeBorah Williams, who worked with SDOP, receiving a 2008 grant for Life’s Unlimited, an ex-offender support and advocacy group, and in 2017 for Georgia Women in Agriculture Association’s West End Belt-line Farmers Market.

During its three-day stay in Atlanta, the SDOP committee heard about more projects ranging from churches engaging directly with their neighborhoods to efforts to reach out to people at Stewart Detention Center and their families. The day before the national committee meeting started, members Rebecca Reyes, Wesley Woo, Phil Tom and Larry Low met with members of the Korean Presbyterian community in Atlanta to both hear about work being done in the city and talk about how SDOP could engage with the community.

“It was really great to see our Korean churches involved, to be a hub for the other communities of color — of Asian descent — coming together to see what are the ways that grassroots organizations are working in the neighborhood,” said Brooks-Lytle, the Atlanta executive presbyter.

The work of Self-Development of People is made possible thanks to gifts to One Great Hour of Sharing.

Today’s Focus:  Presbyterian Committee on the Self-Development of People