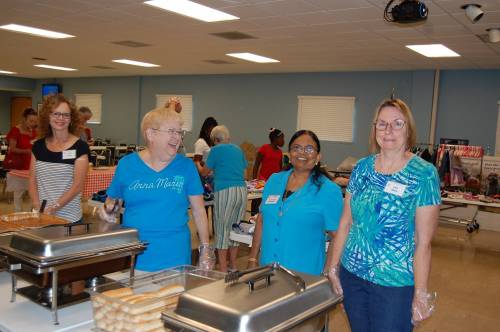 Members of Temple Terrace serve one of their triannual community dinners. Photo provided.

On World Communion Sunday (Oct. 6), individual members of Temple Terrace Presbyterian Church (TTPC) in Florida lifted a loaf of bread from a country where they had lived and recited the words of institution in the language of that country — Arabic, German, Spanish, Greek, Tamil and others.

“TTPC is a culturally and politically diverse congregation that celebrates different backgrounds of members and participants, contributing to a stronger body because of our diversity,” said the church’s pastor, the Rev. Robert Shaw. “See 1 Corinthians 12:4–31.”

Shaw said that celebrating that diversity is one reason they answered the invitation to become a Matthew 25 church.

In today’s politically charged environment, he describes his congregation as bright purple. “We have people who are politically active on both ends of the spectrum and they get along, which is great, but sometimes it makes preaching interesting.”

Shaw, who has been with TTPC since 2015, said one thing that drew him to this church, where about 80 worship each Sunday, is that it is mission-oriented. “In other congregations where I have served, they have said they can do one mission project each month. This congregation says, ‘Do we only have to do one? Can we do more than one?’ There are so many things they want to get involved with and highlight, it’s just amazing.”

TTPC is north of Tampa and both the church and the city are diverse. The church is on a golf course, but to the west is subsidized housing. The University of South Florida is down the road.

Sensing a need, the church began a community barbecue on the last Friday in a month, three times a year. “We recognized that for some people, their income may not have lasted as long as the month. Some tell us it’s the only meal they will get for the weekend,” said Shaw.

TTPC’s ministry page is full of the logos of its partners, including Metropolitan Ministries for Homeless in Tampa, a Wear It-Share It clothing campaign, Meals on Wheels, a sewing class for refugee and migrant women, and a diabetes clinic founded by a church member who is a physician. TTPC runs a small emergency food pantry for people who need help that day, and then connects the individuals with larger pantries and additional resources.

Recently spurred by a Presbyterians Today article about “ditching the boring sermon,” the congregation took that idea to the next level with a day of experiential workshops. One family created a workshop on how to make a prayer book, taught by their second-grade daughter. But the second-grader also asked them to get involved with collecting school supplies. It hurt her heart that some children might not have crayons.

The congregation also has sent money to Presbyterian Disaster Assistance, earmarking the money for wherever it is most needed.

As a pastor, Shaw feels one of his areas of primary focus is congregational vitality. “I feel an important part of my job is to help develop a variety of leaders, so they are equipped with the skills to do the things they feel called to do,” he said. Matthew 25 is an invitation from the Presbyterian Church (U.S.A.) that calls on congregations to actively engage in the world around them. Congregations accepting the invitation agree to embrace one or more of three areas of focus in their communities:

Your congregation can join this journey. Learn more.

Gracious and loving God, help us to rally ourselves and others to serve as you served. Amen.