The valley of the shadow of death is near Douglas, Arizona

A Catholic priest, a charismatic layperson and a Presbyterian pastor met with the patrol officer in charge of the Douglas border patrol station to discuss possible responses to the increased number of people dying while migrating in Sulphur Springs Valley, the valley in which Douglas, Arizona, and Agua Prieta, Sonora, Mexico, sit. The “prevention through deterrence” border policy instituted by the Clinton administration, the economic boom of the 1990s and the devastation of the Mexican economy had turned our sleepy and isolated valley into the primary crossing point for unauthorized migration into the U.S. As a nation, we chose deserts and mountains as deadly deterrents to migration. Our policy is intentionally lethal.

We asked Chief Rowdy Adams if he thought the policy that we as a nation were asking him to uphold was a moral one.

He responded with a clarity that was jarring yet welcome for its honesty:

Almost 15 years later, Silvestre walked into the Migrant Resource Center (MRC) in Agua Prieta with two backpacks. One was his. The other belonged to Elsa, his wife, who had died during the night in the desert about 30 miles west of us. Silvestre was returned by the border patrol and found refuge at the MRC, while we worked with the Mexican consulate to repatriate Elsa’s remains to their community in Mexico. 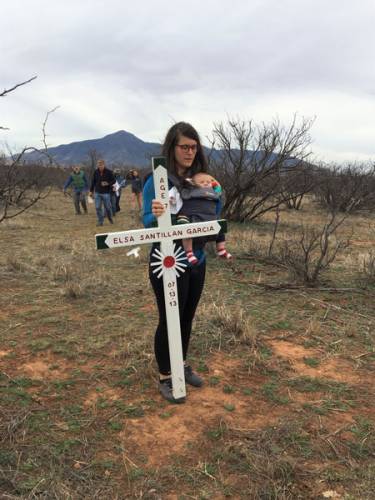 Laura Stump Kennedy and her son carry Elsa’s cross toward the place where she died. (Photo by Judy Bourg)

Several days after Silvestre had been returned, Laura Stump Kennedy, the MRC’s U.S. coordinator, shared with him about the Healing Our Borders Prayer Vigil that we hold every Tuesday, and asked him if he’d like for us to make a cross for Elsa.

She recounts the time in her article, “Two Backpacks”:

“Silvestre, we hold this weekly vigil in Douglas,” I explained to him, gently handing him the cross. “We remember and honor all those who’ve died around here in the desert. If it’s all right with you, I would like to make a cross for Elsa.”

He looked at me, eyes brimming with tears and watched my hands as I pulled a marker out of the drawer.

“Gracias,” he said emphatically, placing his hand on my hand, looking into my eyes with conviction. “Gracias.”

He grasped the marker and carefully etched her name in all capital letters. We added her birthday. Her death day. The words “Mother, Sister, Daughter, Wife, Friend.” I wrapped her carefully in my arms and carried her out of the center.

I crossed through the port of entry on foot, handing over my passport without saying a single word or being asked a single question, all the while clutching her to my chest.

Because our border and immigration policies do not value all human life, death has continued. In fact, crossing without documentation today is much more dangerous, expensive and lethal than when we met with Chief Adams. Although the number of people dying in our valley has decreased, it is not a result of our conversations with Chief Adams, but rather the effectiveness of a policy to redirect migration to more isolated and harsh terrains along the border.

Following the downing of a U.S. drone by Iran last year, President Trump called off a military strike at the last minute. Reports say that when the president was told that there would be 150 deaths, he decided that the strike would not be “proportional.” And yet, each year our policy of “prevention through deterrence” leads to the deaths of hundreds of people desperately fleeing hunger and violence. But rather than declare that our lethal policy is a disproportionate response to the men, women and children seeking refuge in the U.S., we as a nation continue to make it increasingly more dangerous and deadly.

And so we gather every Tuesday to honor the memory of Elsa and the hundreds of other people whose bodies have been recovered in Cochise County — each with a cross — to remind us that when we did not welcome Elsa, we did not welcome Jesus; to lament our nation’s cruel policy and our complicity in systems of oppression; to pray for our nations for a better way, and for an end to death in the desert; and to commit ourselves to work for a more just, more peace-filled and more loving world.

We pray for civility, Christ Jesus, in all deliberations that affect the lives of your children throughout the world. Help us remember your commandment that “you should love your neighbor as yourself.” Amen.