A look inside Presbyterian work at the United Nations

With political campaigns nationwide ramping up for the 2020 elections, two staffers at the Presbyterian Ministry at the United Nations recently reflected on the varied work they put in each day. 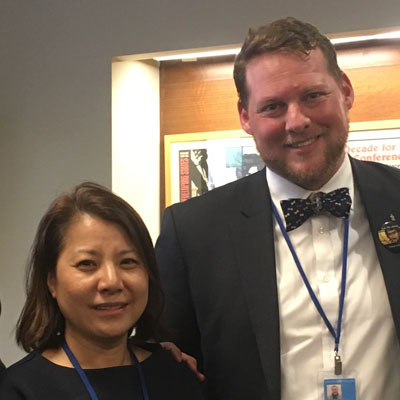 Ryan Smith, director and Presbyterian representative to the United Nations, and Sue Rheem, mission specialist for international advocacy, said during a 45-minute webinar there’s no typical day in their office in the Church Center for the United Nations, owned by United Methodist Women and across the street from the UN headquarters in New York City.

“No two days are alike,” said Rheem. When a conflict arises, staff at the ministry monitors UN Security Council debate. Recently they’ve been attending meetings to help UN experts complete assessments and write reports on human rights violations. They’re also constantly working with ecumenical partners with offices in the 12-story building, and they carry out policies of the PC(USA) General Assembly. “We connect Presbyterians to the United Nations and the United Nations to Presbyterians,” Smith explained. Those connections can take the form of advocating for changes in governments around the world. Nearly every week Smith and colleagues hold off-the-record meetings with ambassadors and diplomatic staff to allow them to speak freely.

“It allows for frank and honest conversations about what we think the Security Council ought to do,” Smith said. One example of how that process can pay off: After about 18 months of advocacy, the only resolution to pass the Security Council on Syria included protection for the Christian minority there, a policy that the Presbyterian Ministry and other faith organizations were eager to see in the final resolution.

Other aspects of Presbyterian work at the UN are much more public.

“A big part of our involvement in the United Nations General Assembly is to be a ministry of presence at the Great Hall itself,” Rheem said. “We listen to world leaders to let the world know the faith communities are listening and watching” in order to be “a moral voice in the UN community.”

Other positive change has come about through persistent advocacy. Smith cited the example of gender justice work done with diplomatic officials from Georgia — the former Soviet state, not the Peach State.

“The (Georgian) government said that what you have outlined for us is so important and so impressive, we will send it back to our Parliament and try to enact it into our laws,” Smith said.

“The UN is very interested in the work being done on the ground,” Rheem noted, adding that the Presbyterian Ministry at the United Nations brings that real-time information to the UN’s member states and missions. “They know as a church we are committed to the people of all the different countries. It makes our job easier and more worthwhile.”

Smith called all the effort “a gift of the PC(USA) for our office to do that work, connecting partners all over the world to advocate for the changes our global partners advocate for.”

While some of the work is focused on a current crisis or inequity, other justice efforts are more long-term, Rheem said.

In addition to ecumenical and international work, Smith said the Presbyterian Ministry works closely with a number of Presbyterian Mission Agency groups, including the Office of Public Witness, World Mission and Racial Equity & Women’s Intercultural Ministries.

“That’s a reason I love working at the Ministry at the United Nations the most,” he said. “Our office has the privilege of representing the work of our colleagues to the international community.”

The Presbyterian Ministry at the United Nations and the Washington-based Office of Public Witness are especially close partners, he said. “They’re our equivalent office,” he said. “Their job is to work with the U.S. government addressing all these topics.”

Another effort the world needs to hear about, Smith said, is the denomination’s work on climate justice by the Presbyterian Hunger Program and Presbyterians for Earth Care.

“Without [our partners], we wouldn’t have much to talk about at the United Nations,” he said.

The Presbyterian Ministry at the United Nations is supported by gifts to the Peace & Global Witness Offering.

Creator God, thank you for the work of the Presbyterian Ministry at the United Nations and for all who strive for positive change throughout the world. May our work reflect your love for humanity. In Jesus’ name we pray. Amen.