The power of sharing our stories

Words tell of hope in South Sudan — and beyond 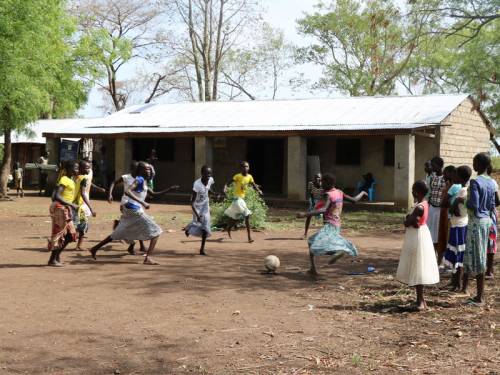 Rachel Obal recalled her time as a young girl playing ball in the schoolyard — an opportunity many girls didn’t have. Today, through her work and the work of mission co-workers like Nancy Smith-Mather, hope in a brighter future exists for girls in South Sudan. Courtesy of Nancy Smith-Mather

I sat next to Rachel Obal outside of her home in rural South Sudan, listening to the story of her uncle who, as a boy, was taken from his home by Arabs to be sold as a slave near Khartoum, Sudan. Obal’s words painted a vivid picture as she spoke of how her father followed his brother to rescue him and had to witness the small boy, with hands tied behind his back, paraded in front of crowds to be sold.

No one, though, would buy the boy, as he was too young. And so Obal’s father tried to negotiate for his release. That didn’t work out well. The men who took his brother would allow the young boy to go free only after Obal’s father worked for them for five years.

“So my father worked for them, and during that time he learned Arabic. After five years, he returned to Akobo, his home in southern Sudan, with his brother by his side,” Obal said.

American Presbyterian missionaries came to Akobo. Many of them, Obal said, had learned Arabic while in Khartoum. Obal’s father soon became the village’s translator, translating the Arabic the missionaries were able to speak into the Anyuak language of those in Akobo.

“Every morning, before opening the clinic, there was prayer. People heard about spiritual and physical healing,” she said.

When she was a child, her father made the radical decision to put Obal and her sisters in school.

Obal finished her elementary schooling in Akobo, then went to an intermediate school in Yei. It was like “heaven on earth,” she recalled, as she was able to commit to full-time studies.

Obal stayed in dormitories at the boarding school in Yei, where she not only studied hard, she played basketball and volleyball too.

When Obal’s father died while she was still young, the family was adopted by the church in Akobo, and Obal and her sisters were able to continue their education.

“When we had our three-month holiday from school, my sisters and I would come back to Akobo and work for the missionaries of the church who adopted us,” Obal said.

People in the community saw that the education of the Obal girls brought them money, and because of that parents started putting their girls in school.

In 1965, war broke out. The Arabs said the missionaries were helping the South Sudanese and so they were expelled, Obal said.

“They told me if I continued to support the rebels, they would kill me too,” she remembered.

Obal, however, didn’t back down and told them, “If you kill me, it is my day to die.” She was eventually released.

Life remained hard for the Obal family for the next two decades, when finally, in the early 1980s, Obal’s family applied for resettlement in the United States. Home would now be Jacksonville, Florida.

Obal took a cue from her father and began volunteering as a translator at a refugee resettlement agency. She also put her own experiences to work, becoming a case manager helping to resettle refugees from around the world. Obal worked tirelessly, and when she needed more help, she would seek out more volunteers at area churches.

“I got so many volunteers involved, that I got an award from the White House, signed by President Obama,” Obal said. “People thought, ‘Who is this lady; who is doing all these things?’ But it was by the grace of God.”

I found myself realizing how important it is to share our stories with one another. To let each other’s stories break our hearts, quiet our spirits, cause contagious laughter, feel our connectedness and our distance, and make us care about each other’s struggles and aspirations.

God of all peoples, we thank you for the richness of your world and the diversity of your people. Help us learn from each other and support each other as we all explore better ways to serve you and your communities. Amen.