The peace of Christ be with you. And also with you.

On Sunday mornings in congregations across the country, hands are shaken, and the words of Christ’s peace are exchanged with one another. Yet what does it mean to pass the peace of Christ into a world that is often anxious?

These days, unrest comes in many shapes and sizes — and so do the attempts by Presbyterians to quell such situations. From something as simple as using a peace-related hashtag on social media to fill others with hope to volunteering at a food bank or a soup kitchen to ease the anxiousness of hunger, these actions can help spread positive and encouraging energy in neighborhoods. 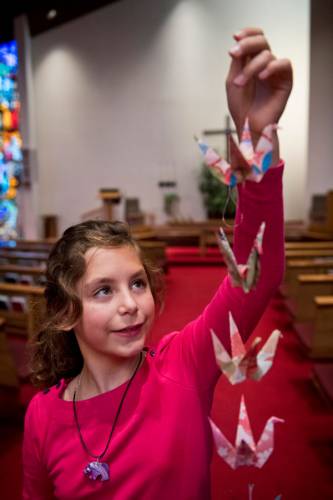 Nina Geist of First Presbyterian Church of Anchorage, Alaska, began making origami cranes after being inspired by the story of a young Japanese girl, Sadako Sasaki. Sadako, who died of radiation-induced leukemia in 1955, 10 years after an atomic bomb fell near her home in Hiroshima, had turned origami cranes into an international symbol of peace. Here, Nina displays one of her favorite origami crane mobiles. She sells the cranes to raise money for mission co-workers who serve as peacemakers overseas. Marc Lester

For Nina Geist, it doesn’t take much to bring peace to others. All the 10-year-old from Anchorage, Alaska, needs is a small piece of colorful paper.

For the past year, Nina, of First Presbyterian Church of Anchorage, has been creating origami cranes. She plans to sell them at her church’s holiday gift market this year. The market supports local and global missions. The money Nina makes will be sent to PC(USA) mission co-workers Ryan and Alethia White, who are working to bring peace to the lives of Iranian immigrants and refugees in Germany.

Each crane takes roughly three minutes to create, and Nina has made “a couple of hundred” cranes to date, including one from Advent 2018 that still hangs on the pulpit at First Presbyterian Church of Anchorage.

Last year was the first time that she sold the cranes at the gift market, but she also makes custom-colored ones for friends and church members throughout the year. She sells some cranes individually, but most are part of a mobile that has multiple cranes attached. So far, Nina has sent $300 to the Whites in Germany.

“Nina’s action to make cranes and sell them to support the ministry in Berlin was very inspiring,” said Ryan White, “especially as we think about how to talk with our own daughters about the importance of being a peacemaker and helping support initiatives in our communities and around the world.”

Nina got the idea of making the origami cranes after she had attended a play about a young Japanese girl, Sadako Sasaki, who contracted leukemia stemming from radiation poisoning related to the World War II bombing in Hiroshima.

Confined to a hospital, the 12-year-old began folding origami cranes in hopes of reaching 1,000, since legend had it that the folder of this many cranes would be granted a wish. One story says that Sadako completed only two-thirds of her goal, so her friends finished the task for her and placed all 1,000 cranes in Sadako’s casket. That spirit of community togetherness stuck with Nina, her parents say.

In another part of the nation, at First Presbyterian Church of Spartanburg, South Carolina, 30 people took time to come together and read the book “Great Peacemakers: True Stories from Around the World” by Ken Beller and Heather Chase, where they learned about the different styles and personalities of people who made peace a priority in their lives.

“One of the things this book did was to open your eyes to the fact that a peacemaker is often a very normal, humble, even a poor person — not necessarily the rich and the powerful or a political dynamo,” said Tom McDaniel, a member of First Presbyterian who led the book study with his wife, Nan. “These are real, average people who find themselves in a world where they are willing to do something to make this a better world in terms of peace.”

The book study began last spring with such topics as “Choosing Nonviolence,” “Living Peace,” “Honoring Diversity” and “Valuing All Life.” It concluded last fall with a chapter on “Caring for the Planet” — something McDaniel never thought about when thinking about creating peace in today’s world.

“Peacemaking is an extremely broad notion,” McDaniel said. “When you can talk about peace from a standpoint of the animals and the environment, as well as social or political issues, it just shows you so many dimensions of peacemaking that you normally don’t think of.”

Holy God, let peace begin with us. Continue to guide our path as we seek to serve in faithfulness. Amen.