We are called to faith, not fear 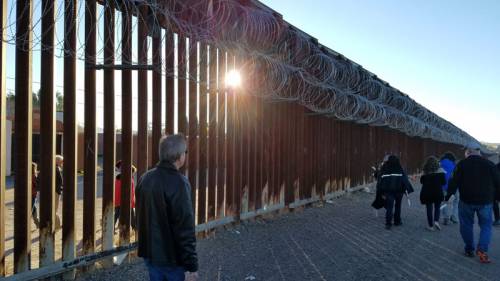 The root causes of migration are many. The answers are sometimes elusive. But Presbyterian World Mission, its mission co-workers and global partners are working together to find those answers.

Although forced migration is a global issue, there has been a strong focus in the U.S. on those seeking asylum from Central America.

According to the blog Lawfare, which is dedicated to national security issues, about 265,000 people left the northern triangle of Central America (El Salvador, Guatemala and Honduras) in each of the past five years, with the majority headed for the U.S. There has been a sizable increase to about 508,000 people from those three countries headed north in the first eight months of 2019.

About half of the migrants coming from Central America say economic reasons forced them to leave their homes. The northern triangle includes some of the poorest countries in the world, with a long legacy of inequality and most of the money and land concentrated in the hands of a small, elite group. Violence and insecurity, as well as vulnerability to the impact of natural disasters, are other key factors.

Mission co-worker the Rev. Mark Adams has lived on the U.S.-Mexico border since 1998. He believes that Christians are called to see the migrant issue very differently.

“We as the church are called to respond in faith and not fear. It’s not just the current administration, but previous administrations as well, who have led us to respond in fear about issues of migration,” said Adams. “We as the church have to say no, we are not going to respond in fear. We must remember, whether people are coming for economic reasons or family reasons or fleeing violence and seeking asylum, these are people created in the image of God and we’re called to love and not to fear.”

Adams said that the church must look at the reality of migration as primarily a human issue, not a political or ideological issue. “I think it is imperative that we always keep it focused on humans and faith and how we live out our faith amid the realities we face,” he said.

“If there’s a crisis, it’s a crisis of people fleeing violence and seeking refuge in a country that has historically been a beacon for refugees from throughout the world. Right now, our country’s leadership doesn’t want to be a beacon of refuge and has decreased the number of persons we are resettling,” Adams said.

Kristi Van Nostran, a former mission co-worker in El Salvador, is now working as an immigrant accompaniment organizer for two Southern California presbyteries, Pacific and San Gabriel, to coordinate activity and resources. She has seen the issue from both sides.

“You risk all by staying or you risk it all by leaving,” she said.

Presbyterian Peace Fellowship has begun an accompaniment program to support the human rights of migrants in Agua Prieta, Mexico, adjacent to Douglas, Arizona. The established accompaniment program in Colombia has shown that the visible presence of accompaniers from the U.S. serves as protection from the cartels that try to intimidate and extort money from migrants. In Agua Prieta, the intimidation there has increased exponentially, to the point of indirect threats of violence.

Adams says it’s important to learn and spread knowledge of the issues surrounding migration. He recommends watching the film “The Genesis of Exodus: The Roots of Central American Migration.” The film and more resources can be found on the website of the Presbyterian Church (U.S.A.) Office  of Immigration Issues, genesisofexodusfilm.com/thefilm.

Adams also recommends contacting the Casa Mariposa Detention Visitation Program to find out how you can write to people who are in immigration detention to remind them that they are not alone. For more information, email program coordinator the Rev. Elizabeth Smith at cmvisitation@gmail.com.

In addition, Adams recommends calling elected officials and urging them to prioritize the reunification of families through the U.S. Department of Homeland Security. The Office of Public Witness posts legislative updates and ways to find elected officials at capwiz.com/pcusa/home.

Compassionate God, let us join in prayer for the men, women and children seeking asylum; for a government system unprepared to respond to their needs; for alternative solutions; for elected leaders struggling to find common ground; and for counselors, pastors, social workers and doctors who are physically and emotionally exhausted by the pain they see. Amen.