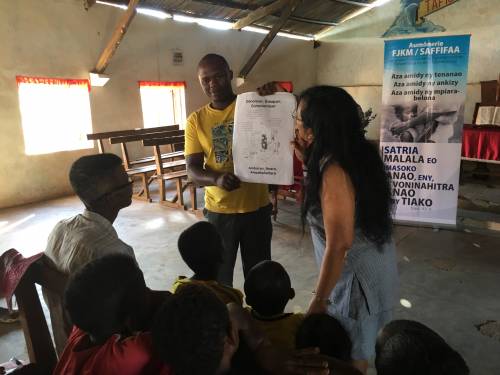 Once rescued, survivors of human trafficking are often reluctant to talk about their experiences. That is usually out of self-protection for fear of being blamed by family and community for the exploitation and abuse they’ve suffered at the hands of bosses and employment agencies. But that is not so for Juliette (not her real name). Out of concern for other women who may fall victim to profiteers, she even agreed to have her account recorded, trusting that we would share her story with sensitivity.

Juliette decided to escape Madagascar’s financial crisis following a 2009 political coup and approached a recruitment agency that offered her employment in Kuwait. The hard work, lack of free time and imposed religious observances took a toll on her health, however, and eventually landed her in a hospital. Juliette realized that it was better for her to go home, but that proved easier said than done: “The agency didn’t allow me to return to Madagascar. The agency wanted me to stay and work. Then the people at the agency beat me and forced me back to work.” Complicating Juliette’s situation was the fact that her passport had been confiscated upon her arrival at Kuwait’s airport, and Madagascar has no diplomatic representation in Kuwait for her to resort to. Eventually, she managed to escape and ran to the French Embassy, where staff helped her find a place to shelter.

Juliette is one of 235 trafficked Malagasy women who have been rescued with the help of Pastor Helivao Poget. Helivao is the director of the Ministry for Marginalized People (SAFFIFAA) of the Church of Jesus Christ in Madagascar (FJKM). SAFFIFAA was started in 2009 under the auspices of the FJKM Chaplaincy Program to address the hardship of vulnerable groups as a result of the political crisis. When an FJKM member phoned Helivao sounding alarm about a close relative who was trapped in an employment scheme in Kuwait, Helivao traveled to Kuwait to take stock of the situation. She found scores of Malagasy women in similar situations, including Juliette, and eventually helped secure their return to Madagascar.

Once back, Helivao started pondering how to counter the migration phenomenon in Madagascar that ultimately leads to trafficking abroad. She concluded that a dangerous concoction of domestic violence, local customs and grinding poverty renders particularly young women from rural communities vulnerable: “In our assessment of the situation of trafficking survivors who return home, most of the women leaving are already survivors of domestic violence. In their accounts, they say: “We already are victims of assault and battery within our own families. We are already prepared to be beaten. Even if we are going to be beaten […] it would be by someone else that we don’t know, but maybe we’d have a good salary.”

Thanks to a 2019 Presbyterian Women Thank Offering grant for SAFFIFAA, Pastor Helivao launched a human trafficking prevention campaign called Mamonjy, which is Malagasy for “save.” As a missiology professor on the FJKM theological faculty, she engages her former students in the campaign and works with the FJKM’s regional synod committees to organize awareness-building activities for local congregations in 10 zones she identified as the most vulnerable across the island nation. Their tools vary from banners with anti-trafficking slogans based on Scripture, to posters that facilitate conversations about the various forms of domestic violence and crayons for the youngest generations to draw pictures of things for sale in the marketplace. The message for them? “YOU are not for sale!”

Christi Boyd, Mission Co-Worker in the Democratic Republic of Congo

Liberator of slaves in Egypt, comforter of exiles in Babylon, protector of your Refugee Child forced to flee deadly violence, we pray that you break the chains of all who are trafficked to foreign lands and rescue those held captive against their will. May those behind these inhuman schemes be unveiled and held accountable so they can conspire no more.