I still visualize the words etched into a granite slab on a wall of Elmina, a stately castle on the coast of Ghana, constructed in 1482 by the Portuguese:

IN EVERLASTING MEMORY
OF THE ANGUISH OF OUR
ANCESTORS.
MAY THOSE WHO DIED
REST IN PEACE.
MAY THOSE WHO RETURN
FIND THEIR ROOTS.
MAY HUMANITY NEVER
AGAIN PERPETUATE
SUCH INJUSTICE
AGAINST HUMANITY.
WE, THE LIVING, VOW
TO UPHOLD THIS.

I smell the ocean, the same Atlantic that my siblings and I splashed in as children in South Carolina. But here waves rippled against the fine sand of the West African coast. Rickety canoes and fishing boats hugged the shore. The air was thick with humidity. This Atlantic, my Atlantic, connecting continents, enabled the Middle Passage.

Blue-gray skies framed the somber scene. Outside the castle, vendors hawked their wares. Inside, a genteel guide described the atrocious cruelty and inhumanity of the passage. We stood in the stark but still majestic space of the castle where so many were victims of human trafficking. We heard how greed and tribal infighting led to the bartering or sale of thousands of African citizens into slavery. We heard the stories of European domination — by the Portuguese, English, Danish, Dutch, Swedish, others — who allegedly profited from this illicit export business.

Here was the courtyard where women and men were routinely separated, stripped, treated as chattel. Many were held for three months or more, tortured, humiliated, intentionally and callously deprived of their dignity and humanity. There were the shuttered windows, signs identifying the male and female slave dungeons, the steel bars, the shackles, the skull-and-bones display over a castle door, the incongruous entryway labeled “Portuguese Chapel.” And finally, we were directed to the small but ominous tunnel leading to the door of no return, labeled “Slave Exit to Waiting Boats.”

Our emotions were raw. My friend and fellow traveler wept openly as the guide’s narrative evoked the imagery and haunting sounds of the sorrowful journey of our ancestors. I enfolded her in my arms, and we held onto each other. No words — just anguish and despair.

Here we were in 2014, American Presbyterians from New Jersey’s Witherspoon Street Presbyterian Church, on a mission to learn and serve, searching for our roots and for understanding. Four of us were African American. Three were retired. All five of us were senior citizens, mature in our faith and deeply imbued in the history of a country, our country, that was built on the backs of slaves — ancestors ripped from rural villages like those that hosted us, taken forcibly from inland territories to the expansive African shore. None of us were prepared for the sensory-jarring shock and emotionally tumultuous nature of this experience.

I had read about African slave trafficking, and of course I knew that my ancestors were enslaved. An amateur genealogist, I had researched my family’s lineage. However, my search stalled in the early 19th century, when I uncovered my great-great-grandmother Prudence’s death record. She was born in 1827 but records for black people before that, other than bills of sale, were scarce or nonexistent. We were property, commodities. 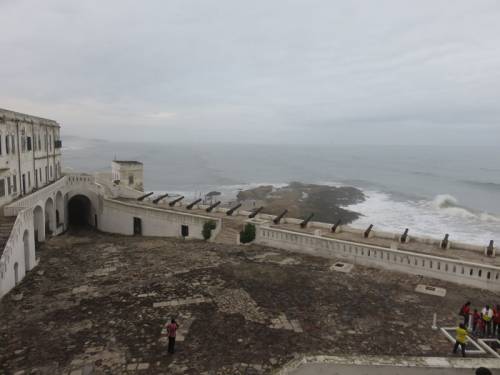 Looking down from the upper floors of Cape Coast Castle. The “Door of No Return,” where captives were loaded onto ships, can be seen in the lower left. (Photo by Josh Heikkila)

In family and church documents from the late 1800s and early 1900s, Prudence and her peers were described as “working in servitude” to white owners. I inherited a handsome picture of her and have tried to imagine what her life was like in South Carolina. However, not until I stood on the cold pavement of Elmina Castle did I begin vividly to imagine that Prudence’s great-great-grandparents might have passed through these doors.

I ask myself, what could that African ancestor or others have done to deserve such a fate? How much agony did they endure? How did they have the resilience to survive?

And what meanings do their stories have for me, a person of privilege and freedom? What debt do I owe them, those men and women who toiled and endured trauma — and loved — despite the pain of forced migration?

In a small but profound way, the doors of Elmina revealed new insights for me. I feel gratitude that I carry the DNA of my West African ancestors, and that I may be, in some small way, a fulfillment of their hopes and prayers and dreams. But that journey, the experience of being in the space where so many were forcibly broken, also renews my sense of duty to remain engaged in the movement for freedom and human rights today.

Centuries have passed, but injustice has persisted. We see and hear about the families and children struggling to cross borders to attain a safer, more stable life. Human trafficking still exists in many nations, including ours. Regrettably, we are complicit. Poverty, lack of resources and structural racism limit the opportunities of many of our fellow citizens around the globe.

Unexpectedly more than three years after we returned from Ghana, I was called back from the sidelines of retirement to work in support of a new generation of student leaders — that they may be encouraged to travel broadly, to see and confront injustice, to sustain the energy and resilience needed for a life of activism, and to enjoy their privilege and freedom.

The theologian Frederick Buechner wrote:
“The place God calls you to is the place where your deep gladness and the world’s deep hunger meet.”

My Ghana journey offered a moment of discernment. In confronting my history, I was moved to “let my life speak” and respond to God’s calling by serving another beloved campus community.

Lord God, give us brave hearts to fight for justice in Jesus’ name. Amen.