‘Put us where you want us, and show us what to do’ 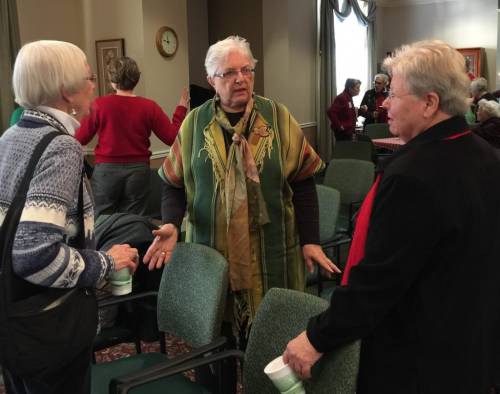 A congregation without a building but with a proven record of innovation for serving the Rochester, New York, community — especially those living in the city’s margins — has accepted the Matthew 25 invitation.

“I am so excited to have this national focus on a passage that has been a guiding light for our ministry for a long time,” said the Rev. Laura Bachmann, associate pastor at South Presbyterian Church.

Having sold its building five years ago, the church’s 53 members, together with a number of affiliate members, serve the Rochester community through its Acts of Faith model of ministry. The church defines the model as “an organic grassroots ministry growing out of the needs of people.” A group — which can be as few as two people — asks the session for permission to start up a ministry. The session has just one question before granting its approval: does it create energy and excitement?

“We understand that to mean the Spirit is present,” Bachmann said.

The model is drawn from this prayer: Put us where you want us, and show us what to do.

“It’s brand new but it’s old, like the early church,” Bachmann said of the ministry model. Ministry areas are varied, with some more overtly religious than others. The Dinner and a Movie group meets weekly to dine, view a movie and discuss the previous week’s film. The group typically occupies the “P” row at Rochester’s Cinema Theater. “‘P’ for ‘Presbyterian,’” Bachmann pointed out.

Monroe Milers is a youth running program in which youth train near Mount Hope Cemetery. They sometimes combine training and learning by visiting the gravesites of notable Americans including Frederick Douglass and Susan B. Anthony.

New Life on Monroe is a weekly worshiping community that’s housed in an assisted living facility serving a diverse population.

“We were the first people in the state allowed into those forensic units to do that work,” Bachmann said. “It’s in our DNA to go find people where they are. It’s about allowing people to find their calling, then going out into the world to support that work.”

“They are there because something really awful has happened,” she said. “They have deep questions about forgiveness and restorative justice, and deep faith questions.”

The varied worship settings matter not a bit to South Presbyterian members and affiliate members, she said.

“We want to say you are always at church,” she said. “When I am at St. Joe’s (the Catholic Worker facility), I am a better pastor, preacher and person of faith for sitting in that building.”

South Presbyterian members and affiliates take over at St. Joe’s one Sunday each month so that the staff there gets a bit of a respite from its difficult work.

“We are able to be present there and embody our faith in a way I couldn’t do so deeply until I came here,” Bachmann said. “Some people are afraid to go in there, but I come away from there with deep joy. Maybe it’s because the Spirit is so present. That’s what I want other people to encounter.”

“So much of (Christian) mission is the empire model: Let me come in and fix you, rather than coming in humbly alongside and thanking people for welcoming me,” she said. “Can I sit here with you for a while? I hope (the Matthew 25 invitation) will inform those of us who want to address justice with the way we write laws, design transportation systems and decide who lives where.”

“Are we thinking about everyone?”

God of grace, thank you for people who inspire us. Thank you also for those who are willing to serve you in their ways. Please help us to give more as we seek to follow Jesus. Amen.