How safe is your church?

As gun violence escalates, churches wrestle with how to protect worshipers

Though the vast majority of active shooter incidents occur in government, military, commercial or educational settings, houses of worship accounted for 4% of 250 active shootings in the U.S. between 2000 and 2017, according to FBI data.

“It’s deeply upsetting that today’s worshipers, regardless of religion, have to contend with the very real possibility of an armed intruder,” said Rick Poirier, president and CEO of Church Mutual Insurance Company in Merrill, Wisconsin.

In its recently released, first-ever survey on safety and security in houses of worship — “The Church Mutual House of Worship Safety and Security Study” — 51% of those surveyed feared armed intruders in places of worship, surpassing fear of natural disasters, cyber-security breaches and even sexual misconduct as the top safety issues. 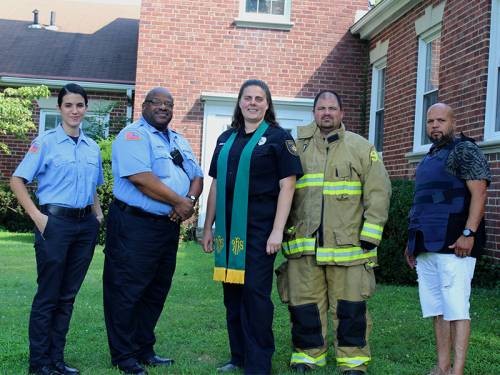 Clergy like the Rev. Caitlan Quinn Gartland, an associate pastor at the Presbyterian Church of Chestertown in Chestertown, Maryland, acknowledge that there is a growing urgency for churches to take steps against an active shooter. The pastor also acknowledges that churches are wrestling with the best way to do that.

In late 2018, leaders of The Presbyterian Church at Woodbury in Woodbury, New Jersey, learned about an FBI active shooter training in Philadelphia. The decision to attend was not difficult. The pastor’s wife is a teacher, so responding to an active shooter is top of mind in the Oehler household. And while there haven’t been any major safety concerns in the almost 300 years of the church’s existence — The Presbyterian Church at Woodbury celebrates three centuries of ministry in 2021 — the church is located downtown in the county seat of Gloucester County. “We have a lot of different people coming and going,” Oehler said.

The trustees left the active shooter training with a “big packet of info,” Oehler said. Among the safety procedures suggested was to redirect how folks enter the building on Sunday mornings. As with many old structures, there are often several entry points. It’s important to have only one entrance used so that traffic can be monitored.

The trustees are also working on an evacuation plan. This is in response to the first course of action they learned in the active shooter training: If possible, get out.

The trustees have walked the property, making sure exits are marked clearly and are accessible. The exercise was valuable, as it was discovered that a side-door exit had inadvertently become a closet “crammed with stuff,” Oehler said.

The evacuation plan will address, too, how to assist those with limited mobility, which is especially important with an aging population, the pastor adds. 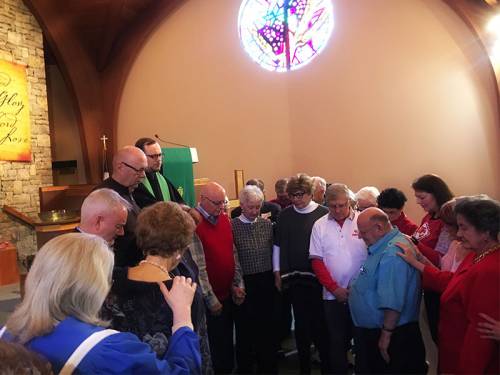 The Rev. Scott Phillips of Northminster Presbyterian Church in Kansas City, Mo., blesses his flock — and seeks to keep them safe. The church locks its doors on Sunday morning, but that hasn’t tarnished the church’s welcoming reputation. People seem appreciative that their safety is kept in mind, Phillips says. Courtesy of Northminster Presbyterian Church

The other two points of action in an active shooter model is to have a safe space to hide — “make sure meeting rooms or classrooms have blinds on windows and locks that can be locked from the inside,” said Oehler — and the absolute last resort: fight back.

Oehler says that the evacuation plan has become more than an active shooter plan. It will be helpful in other emergency situations, such as a fire. The trustees introduced the plan to the congregation in September. It wasn’t a surprise to them, as the quest for safety has been shared each step of the way on Sunday mornings in a “minute for mission” format. Oehler says these conversations are for transparency and to quench fear.

“We have to drop the anxiety level. It’s time to talk openly about gun safety,” he said. Part of that conversation includes who a potential shooter might be.

An FBI agent told Oehler and his trustees that shooters are often white males between the ages of 25 and 45. And, a shooter could be a disgruntled boyfriend, someone with addiction problems, or someone with a history of domestic violence. That’s why the church needs to be aware of the “problems our people are facing and address them before they boil over into violence,” Oehler added.

While safety experts stress there is not a one-safety-plan-fits-all for churches and each congregation’s context is different, Oehler says one thing should be considered.

“What do we call the space we worship in? We call it a sanctuary,” he said. “Yet that doesn’t mean we don’t take steps to keep it safe.”

God of the exodus, deliver us from this bondage of violence. Bless our efforts to answer your call to be peacemakers. May we hear your clarion call from the Garden of Gethsemane.