Mark and Miriam are regularly available to visit congregations or organizations. Email them to extend an invitation.

Mark Adams and Miriam Maldonado are mission co-workers with the Presbyterian Border Ministry in Agua Prieta, Mexico, where Mark has served since 1998. In his role as U.S. coordinator of the binational ministry Frontera de Cristo, Mark partners with Mexico coordinator, Jocabed Gallegos, of the National Presbyterian Church of Mexico. Together, Mark and Jocabed coordinate the six ministry areas of Frontera de Cristo: church development, health, family counseling, the New Hope Community Center, mission education, and the Just Trade Center.

Miriam connects people and organizations across borders and serves as a liaison of Frontera de Cristo with the Center for Drug and Alcohol Rehabilitation and Recuperation (CRREDA in Spanish), DouglaPrieta Trabaja, and the Lirio de los Valles Presbyterian Church. She works with DouglaPrieta to help the community, schools, rehabilitation centers and families of the church grow their own food, increasing their nutrition possibilities and connection with God’s creation and one another.

Both Miriam and Mark have been instrumental in the development of Healing Our Borders/Sanando Nuestras Fronteras, an ecumenical group in which Frontera de Cristo is active.

Mexico has been described as a land of contrasts. Natural beauty, urban blight, poverty and affluence exist very close to each other. Yet most Mexicans have little chance of attaining an economically prosperous lifestyle. Many impoverished Mexicans come to the United States in search of better incomes. Death from dehydration and heat exhaustion are not uncommon as migrants make their northbound trek, and more than 1 million are arrested each year for working in the United States without proper documentation.

The Presbyterian Church (U.S.A.) has been engaged in mission in Mexico since 1872. Binational border ministries were begun in 1984 at multiple sites along the U.S.-Mexico border. Frontera de Cristo is one of five sites that are still a major focus of Presbyterian work in the border region:  https://presbyterianborder.org.

Read: “From the brink of death to life” about Mark’s work at Frontera de Cristo

Mark and Miriam met when Mark came to Agua Prieta to serve with Frontera de Cristo. After working for several years alongside her husband, Miriam was invited to serve as a mission co-worker under PC(USA) appointment in 2011.

Through Frontera de Cristo, Mark brings together people from both sides of the border, building relationships and understanding between them. “I help them reflect biblically and theologically about what it means to be a disciple of Jesus Christ in light of our spiritual, social, political and economic connectedness,” Mark says. Together, Mark and Miriam continue a ministry of reconciliation, bringing people together around issues of migration and faith.

Mark looks back at a mission experience in 1994 as foundational for his present ministry. “I left South Carolina to be a mission volunteer at the border ministry site in Piedras Negras, Mexico. I was excited about developing close relationships with Mexican sisters and brothers,” he said. “The way God worked in our lives to bind us together in real love amazed me. I had been proclaimed a child of the covenant at my baptism and was baptized into a community of believers. The reality of how grand this community is didn’t become clear to me until I lived and served with Uno En El Espiritu, a church in Piedras Negras, Mexico. I experienced the power of Jesus Christ to break down barriers that we humans erect. Language did not define our relationships, nor did nationality, ethnicity or social class, for we are hermanos y hermanas en Cristo.”

Mark and Miriam’s commitment to reconciliation is evident in both their work with Frontera de Cristo and their everyday lives. One night when the four families they invited for a dinner party didn’t show up, they took seriously Jesus’ teaching in the parable of the banquet. They carried the food to the highways and byways of Agua Prieta and fed 100 adults and children who had just been returned to Agua Prieta on a cold winter night by U.S. authorities. That experience was the genesis of a new ministry. “Now we are no longer on the streets but rather in a building, and we serve over 18,000 men women and children each year with about 40 local volunteers as well as volunteers coming from different parts of Mexico, the United States and the world,” Miriam said.

Mark was ordained to the ministry of Word and Sacrament on August 23,1998 in his home church, Clover Presbyterian Church in Clover, South Carolina. He is a minister member of the PC(USA)’s Presbytery de Cristo and is in a collegial relationship with the Presbytery of Chihuahua, Mexico.

After graduating with a bachelor’s degree in history from Furman University in Greenville, South Carolina, Mark spent a year as a PC(USA) Volunteer in Mission working with Proyecto Amistad in Piedras Negras, Mexico, and a year as a high school Spanish teacher with the Clover School District in Clover, South Carolina. He graduated from Columbia Theological Seminary in Decatur, Georgia, with a Master of Divinity degree in 1998. During seminary, he worked as an intern at Idlewild Presbyterian Church in Memphis, Tennessee, as a temporary supply pastor at Beersheba and Ramah Presbyterian churches in York, South Carolina, and as a counselor in an after-school program for the City of Decatur Recreation Department in Georgia.

Miriam is from the southern Mexican state of Chiapas. She left her home at age 18 to work at the border in U.S.-owned factories to help support her family. She is a member of the Presbyterian Lirio de los Valles congregation in Agua Prieta. Miriam is passionate about permaculture and enjoys preaching and leading workshops.

Watch a video of Mark Adams and Miriam Maldonado Escobar 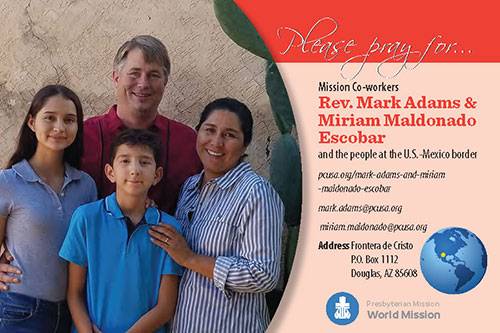 Use this card as you pray for Mission Co-workers the Rev. Mark Adams and Miriam Maldonado Escobar. The card includes a photo of them and…

Give to the ministry of Mark Adams and Miriam Maldonado Escobar