Some days it’s hard to find, but it’s always there 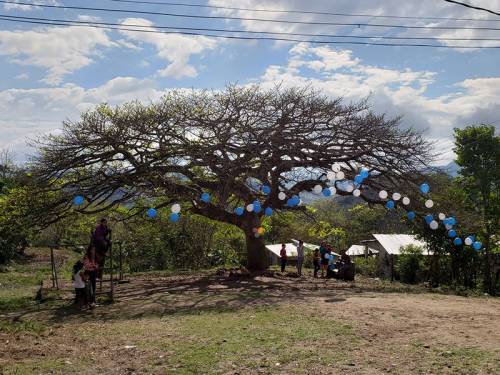 In a village near Trinidad de Copán, Honduras, a large tree shades the community playground and gathering place that were developed and built in partnership with U.S. Presbyterians. Dori Hjalmarson

Living in Honduras this past spring and summer felt especially difficult and intense. What started as a labor dispute between teachers’ and doctors’ unions and the government became agitation against government corruption and economic desperation. Classrooms from elementary to university closed at various times, and taxi and bus drivers sometimes blocked streets and shut down cities. The U.S. Embassy was vandalized and partially closed.

It was difficult for me to see God in this environment. Some days I had to look closely for the smallest sign of God’s presence. But Mark’s Gospel gave me an image I could hold onto: With what can we compare the kingdom of God, or what parable will we use for it? It is like a mustard seed, which, when sown upon the ground, is the smallest of all the seeds on earth; yet when it is sown, it grows up and becomes the greatest of all shrubs, and puts forth large branches, so that the birds of the air can make nests in its shade.

What can I take from this seemingly simple image? The kingdom of God is very small. It is planted in earthly soil. It doesn’t necessarily put an end to the burning sun scorching the earth. But it does provide shade, a sanctuary, open for all.

Earlier this year I accompanied a delegation from the Presbyterian Church (U.S.A.) Advisory Committee on Social Witness Policy, which was completing a General Assembly directive to write a comprehensive study of Central America. In Honduras, we visited a government reception center for migrants deported from North America and heard from individuals and families directly affected by the push and pull of the immigration process.

We heard from Joana, a nun and an immigrant from Brazil, who serves migrants at the Honduran government center, which receives up to 10,000 deportees weekly from the United States and Mexico. She and her team of volunteers were once up for four days straight receiving flights of 250 passengers each that arrived at all hours of the day and night. As the young men and women disembarked, wearing U.S. Customs-issued gray sweats and white T-shirts and carrying their possessions in garbage bags, her message was: “God loves you. I love you. You are worthy of love.” And she gave them coffee, a little food and a smile.

One of my friends and colleagues, a Honduran church leader and theological student, went to Mexico in March. He left Honduras to look for work because low coffee prices left his farm in debt he couldn’t pay. He was away from his wife for the first time in their marriage.

Traveling with a guide he trusted but who began extorting his family for more money for “safe passage” to the United States, my friend seemed to be in a hopeless situation. Each day he weighed the risks and rewards of continuing his attempt or returning home.

“God is with us. God is here, sister Dori,” he told me on the phone. “I have my Bible with me. The word of God is here among us, and I’m able to share it with lots of people here with me. I have faith.”

Sometime after that, my friend’s wife called me with “the best news ever.” Her husband was on his way home. For him, crossing the border was a failed attempt, a financial loss. For her, success lay in the hope of reunification of her family. “Pray for a job for him,” she said.

The kingdom of God is so much more complex than we imagine. In a bleak landscape, we find little spots of light. Amid oppression and desperation, we find the hope cultivated by family connection. We find dignity — shady spots for our nests — under the tree of God’s presence in our created world.

God of grace, we thank you for the love and hope you offer us through Jesus Christ. Continue to open our hearts to the needs around us, that we may show our concern with hearts and hands so that all your children may be showered with your love. Through Jesus Christ our Lord. Amen.