‘Standing together in a world divided’ 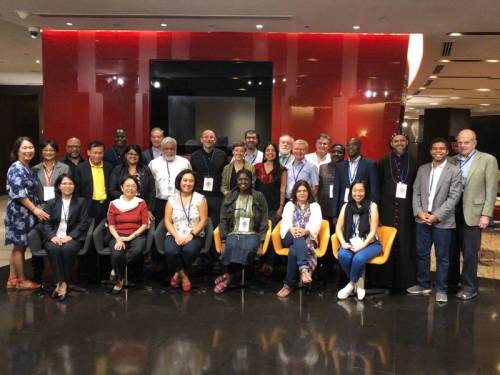 Participants in this past fall’s consultation in Bangkok. (Photo by the Rev. Jieun Han)

The Advisory Committee on Social Witness Policy (ACSWP) and World Mission organized a gathering with ecumenical representatives from around the world this past fall in Bangkok. The purpose was to have deeper conversations about worldwide crises such as climate, weakened democracy within nations and increasingly divisive practices among nations.

The origin of the consultation is the 223rd General Assembly (2018) in St. Louis, which asked the ACSWP to be more in conversation with non-U.S. Christians about challenges facing the world community and issues of international law. At the same time, World Mission was hosting a series of domestic and international consultations with U.S. and global partners.

The Rev. Philip Woods, World Mission’s associate director for strategy, program and recruitment, was set to create a gathering that would address political and economic limits to the holistic mission of the church and to our partnership with other churches. The two ministries worked together to create the Bangkok consultation.

At this event, each participant was asked to prepare a short paper, which was discussed in small groups and in plenary settings. The outcome of the presentations was a joint statement that can be viewed at bit.ly/2tObwac. The statement was completed through debate and consensus; it draws from the discussions held in Bangkok. The Rev. Chris Iosso, ACSWP coordinator, said that the papers would be made available as background to the committee’s report back to the 224th General Assembly (2020). It’s tentatively being called “Reimagining the World House.”

The key questions considered were: How does the church do mission with our partners where governments threaten human rights, democracy and religious freedom? How do we help create a more peaceful and sustainable future reflective of Christian values when large nations increasingly behave in neo-imperial ways, seeking to dominate smaller nations and extend their spheres of influence? Is ethno-nationalism, a twisting of patriotism to celebrate one ethnic group over immigrants and “others,” tied to authoritarian rule? How do actual or would-be autocrats justify weakening democracy, denying the universality of human rights and breaking treaties when it seems to their advantage?

Participants provided their own frameworks for analysis, beginning with a keynote presentation by Charles Amjad-Ali, former director of the Christian Study Centre in Rawalpindi, Pakistan. Amjad-Ali focused on ways in which the habits of domination re-assert themselves, culturally as well as politically and militarily, using a theology of the cross to show God’s work with the victims of empire and God’s call to the church to live in a different order.

His keynote also put inter-religious and post-colonial issues on the table, with a realism about power and a refusal to excuse any exceptionalism — any effort to make one people or nation “more equal than others.”

On a practical level, the consultation was about solidarity and sharing among Christians, a majority coming from churches belonging to the World Communion of Reformed Churches. The World Council of Churches, the Lutheran World Federation, and several regional councils were also informally represented, including the National Council of Churches.

The group chose to use the name of the consultation itself, “Standing Together in a World Divided,” which stresses solidarity and names the threats of increasing division.

The statement was immediately distributed by a study group of the World Communion of Reformed Churches meeting in Cairo, Egypt. ACSWP will now update its thinking in light of the consultation and World Mission will continue to assess how our Church may share its resources to help the mission of global partners.

“While each story was different there was a striking similarity in the experiences described of people describing the impact of politics that are turning people against each other through scapegoating and fearmongering,” said Woods. “Against this background the need to find new ways to stand together became very clear. Connecting diverse peoples is the most pressing challenge of our age. This consultation showed us how we can begin to do that, linking people of very different experience across the world.”

Anyone interested obtaining the set of papers (when edited) and other information should contact Iosso at christian.iosso@pcusa.org or the Rev. Jieun Han with World Mission at jieun.han@pcusa.org.

Gracious God, we hear your call to love our neighbors, and we know that you intend for us to care for both their physical and their spiritual needs. Help us to respond to this hungry, thirsty world with love that pours from the river of living water that you have placed in the hearts of those who believe. In the name of Jesus Christ, who is living water for our bodies and our souls. Amen.