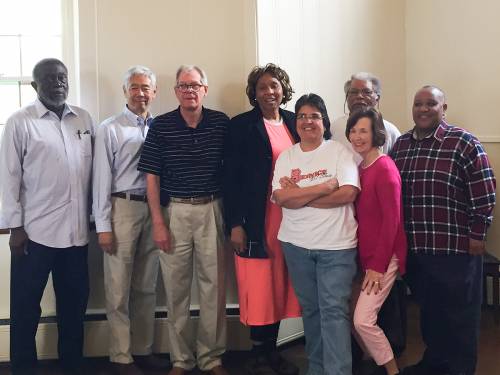 Wesley Woo spent years on the staff of the Presbyterian Church (U.S.A.). During this time, he developed a keen interest in the work of the Presbyterian Committee on the Self-Development of People (SDOP), but because he was on staff, he could not serve on the committee.

When he left his position with the church, he was too busy to volunteer. But Woo knew that one day, he would have his opportunity to serve and there was only one group he wanted to work with.

“I believe in the message of self-development, and there is so much good work taking place. Self-development has always resonated with me,” Woo said. “I grew up in San Francisco and saw a lot of groups come in with the goal of helping people, but sometimes it came across as a bit paternalistic.”

Woo reflected on his time working at a community center in San Francisco’s Chinatown. He said a lot of church groups would come in during the summer and do good work.

“But sometimes they would come in with an attitude of ‘Poor Chinese, they need our help,’ and that would really turn me off,” he said. “So, that whole notion of people standing up for themselves and empowering themselves, developing their own power and creating a sense of dignity was very important to me. That’s the core of what SDOP is about — giving and helping people come to their own sense of power and dignity.”

SDOP works to establish partnerships with groups in the U.S. and other countries that are oppressed by poverty and social systems, seek to take charge of their own lives, work to produce long-term changes in people’s lives and control the programs they own.

Woo has seen firsthand the impact SDOP has had on people and remembers an indigenous radio project in southern California.

“I made a site visit to this indigenous community from Mexico where they have started their own radio station, training people to run it and provide broadcasts in different languages,” he said. “It was very impressive. As many as 35 people were working there.”

Woo has been on the SDOP national committee for three years now.

“Wesley brings a wealth of skills and expertise to the work of SDOP,” said the Rev. Alonzo Johnson, SDOP coordinator. “His impressive background in community organizing and racial justice ministries makes him an integral part of the continuous work we do.”

As all Christian denominations face fewer members and dollars, Woo is concerned about SDOP’s ability to meet needs in the future.

“The whole funding situation is a problem throughout the church and it’s been a disappointment when you look at the size of the grants we now give out,” Woo said. “But with the recent $1 million gift, it will be exciting to determine how to use that responsibly.”

Johnson believes Woo’s commitment will help SDOP make good decisions on how those funds are allocated.

“Wesley is intuitive to what is needed to build healthy development strategies and healthy community,” Johnson said. “His longtime work in the community informs and engages us in ways that are crucial in establishing healthy partnerships with our community partners.”

God, thank you for those who work tirelessly for the self-development of community.  Bless their work. In Christ’s name. Amen.