Group of 16 to speak in U.S. church communities in September, October

The invitations have been extended and this fall 16 individuals will visit Presbyterian churches, mid councils and other institutions as part of the International Peacemakers initiative.

“Each year we bring a new group of individuals to the U.S. and they bring unique experiences and stories, giving us the opportunity to deepen our awareness of what’s going on the world,” said Carl Horton, coordinator for the Presbyterian Peacemaking Program. “We hope that it gives churches a new awareness and opportunity to learn and grow.” 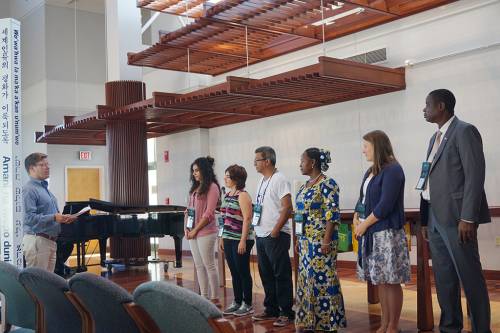 The 2016 International Peacemakers are commissioned at the Presbyterian Center in Louisville, Kentucky, prior to speaking to groups across the country. (Photo by Rick Jones)

Since 1984, more than 300 International Peacemakers from as many as 57 countries have been hosted by 160 Presbyterian mid councils, colleges and theological institutions. Participants include pastors, educators and community leaders.

“This the largest number we’ve had in recent years,” Horton said. “One of the realities of the new world we live in is that all of the invitees may not be granted visas to come here. We are working earlier this year to secure the visas because we never know what hurdles they might encounter.”

Horton says 16 is a large group to accommodate and it will take at least 65 invitations from across the church to get everyone scheduled.

“I’m hoping there’s an increased interest in meeting with our global partners and learning about the peace and justice issues around the world,” he said. “With the added interest in the presence of immigrants in the U.S., it speaks volumes about the church’s ongoing witness to a world of diversity.”

Horton said the peacemakers will address a number of issues.

“We have one peacemaker from Sierra Leone who will address the Ebola virus and how the church responded to that major health crisis. Several of our speakers are working with immigrants, refugees and displaced persons,” he said. “We have two who will speak about human trafficking, one in Africa and the other along the U.S. southern border. There is a peacemaker who works with street children in the Ukraine, another who focuses on prison ministry in Myanmar and several who will speak to the challenges of violence, climate change and poverty.”

The Peacemaking Program has also made a concerted effort to invite peacemakers from predominantly Muslim countries.

“We made this decision because we want to lift up those who work very well in interreligious contexts,” Horton said. “They may be minorities as Christians, but they are regarded and respected in those countries as faith partners and community leaders. We want to lift up the ability of Christians and Muslims to coexist, especially when Christians are in the minority.”

Collaboration between the Peacemaking Program and World Mission allows peacemakers who require translation assistance to be accompanied by PC(USA) mission co-workers or past Young Adult Volunteers (YAVs).

Horton says they’re asking hosts to schedule the peacemakers to speak in a variety of settings, including congregations and community organizations, public and private schools, universities, colleges, and in youth, children’s, women’s and men’s groups.

The peacemakers are available to speak between Sept. 22 and Oct. 16. For more information on scheduling a peacemaker: https://docs.google.com/forms/d/e/1FAIpQLScaUj6M2lQDONaI7QccTBjTvdU9JG2t79PHKJBBRnr0WUPvZg/viewform?c=0&w=1

Creator of peace, heal the conflicts that divide us, and bring us back into that unity of love that reflects your nature, through Jesus Christs our Lord. Amen.