‘People are so hungry for this type of ministry,’ officer says

There’s a growing cultural understanding that mental health is an integral part of one’s whole health, and the church can play a vital role in it, said the Rev. Rose McCurdy, vice moderator of the new Presbyterian Mental Health Network. 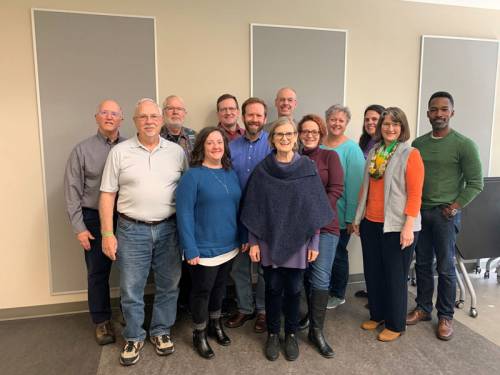 With that in mind, a steering committee of nearly 20 people is forging ahead to solidify the fledgling network as an information hub (and useful resource) for Presbyterian Church (U.S.A.) pastors and members who are looking for ways to better serve the mental health needs of their congregations.

“Our mental and emotional well-being is directly tied to our spiritual well-being and in our ability to connect with God, and I think because that’s becoming more and more apparent that our churches — our people in the pews — need to know that their whole person is also cared for, by God and by their church,” said McCurdy, pastor of First Presbyterian Church in Winneconne, Wisconsin.

The network was called for as part of the Presbyterian mental health initiative adopted at the 223rd General Assembly (2018).

The network’s steering committee recently met at Columbia Theological Seminary in Decatur, Georgia, bringing together people from diverse backgrounds to put the framework in place to work toward the committee’s ultimate goal: encouraging congregations, presbyteries and seminaries to do mental health ministry and to learn best practices for doing that.

The session resulted in the selection of officers and the approval of bylaws and a mission statement as well as a discussion about priorities.

Mission Presbytery in Texas brought an overture to the 223rd General Assembly in St. Louis to implement and move forward from 2008’s “Comfort My People: A Policy Statement on Serious Mental Illness.”

The establishment of the mental health network springs from the approval of that overture and will include resources, such as a mental health toolkit, to help pastors and others.

Ever since this ministry has become public, “pastors have just like poured out to us,” McCurdy said. “It just seems like people are so hungry for this type of ministry and they think it’s such a big topic they don’t know where to start or how to tackle it.”

The mental health movement in the church is taking shape during a time when many people across the country are grappling with mental health issues, from suicides to drug overdoses, as well as the aftermath of hate crimes and gun violence, said Donna Miller, associate for mental health ministries.

She noted that nearly one in five U.S. adults will have a diagnosable mental health condition in any given year, according to the National Institute on Mental Health.

“One of the things that’s very important to get across is the idea that mental illness can happen to anybody,” Miller said.

The network wants to change the way people think about, discuss and approach mental health issues in the church.

In the past, the church sometimes has been “a part of stigmatizing people who are living with mental illness as though it were their fault, as though they needed to do something differently and then they wouldn’t have mental illness anymore,” Milford said.

Being aware of available resources and able to make appropriate referrals for individuals and families is important, Miller said.

The Presbyterian Mental Health Network is intended to help “equip and support congregations so that they are better able to respond to the mental health needs in their midst, and people will find in the church a community of belonging where they feel supported and not stigmatized,” Miller said.

Information about the overall PC(USA) mental health initiative, including a new grant program and resources, is available at pcusa.org/mentalhealth, the PC(USA) Mental Health Ministry website that launched in August.

To increase the visibility of the network, the steering committee is planning to have an exhibit on display at the 224th General Assembly, set for June 20–27 in Baltimore.

Gracious God, you have faithfully walked with us through all these years. As we look toward the challenges ahead, lead us in the ways that you would have us walk. Amen.