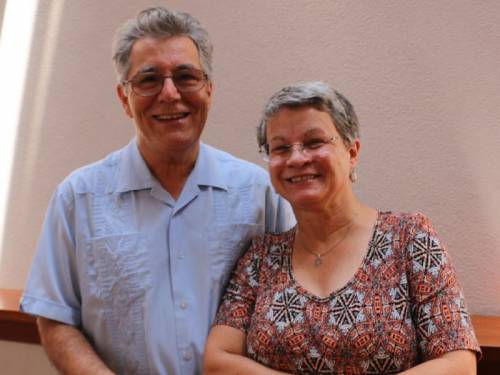 After four years of service with the Evangelical Theological Seminary in Matanzas and the Church in Cuba, the Rev. Dr. David Cortés Fuentes and Josey Sáez Acevedo have answered God’s call to serve as mission co-workers in the Dominican Republic.

Cortés Fuentes will assist partners throughout the Caribbean. Sáez Acevedo is serving at the invitation of the Iglesia Evangélica Dominicana.

Cortés Fuentes’ experience as an administrator and professor in the United States and his service as a mission co-worker and professor at the Evangelical Theological Seminary in Matanzas have given him a deep knowledge of theological education and an openness to diverse perspectives.

In his new role as regional theological educator and curriculum consultant for the Caribbean, he will accompany Presbyterian Church (U.S.A.) partners in the region hoping to strengthen their foundation in theological education. As time permits, he will also be available to teach short courses in his areas of expertise.

In her new role as Christian educator with the Iglesia Evangélica Dominicana, Sáez Acevedo will be part of a team that develops and adapts curricula based on the priorities of the partner church.

The couple will live on the Caribbean island of Hispañola, land that Haiti and the Dominican Republic share. While the region is known for tourism, there are many serious social issues facing the islands that Church partners are addressing, including poverty, human trafficking and climate change.

Cortés Fuentes and Sáez Acevedo have a long history of serving the Church. For more than two decades, Cortés Fuentes taught seminary students in the United States, and for nearly a dozen years, Sáez Acevedo was a Christian educator in several congregations. But things began to change in 2014, when they began to sense a call to international mission service. By spring of 2015, they had accepted the call to enter mission partnership with the Evangelical Theological Seminary in Matanzas and became the first PC(USA) mission co-workers serving in Cuba since the Cuban revolution in 1959.

Prior to entering mission service, Cortés Fuentes worked for four years as pastor of Iglesia Presbiteriana Hispana Emmanuel in Claremont, California. From 2000 to 2009, he was director of academic services and associate professor of New Testament at San Francisco Theological Seminary’s Southern California campus. He was also director of the Hispanic Ministries Program at McCormick Theological Seminary in Chicago and pastor of Ceiba Baja Presbyterian Church in Aguadilla, Puerto Rico.

Sáez Acevedo has an associate of arts degree from the University of Puerto Rico and did additional study at Mt. San Antonio College in Walnut, California, and at San Francisco Theological Seminary.

Dear God, open our eyes to the mission fields. Make us effective in sharing Jesus’ love, as we seek to glorify you through service to others. Amen.