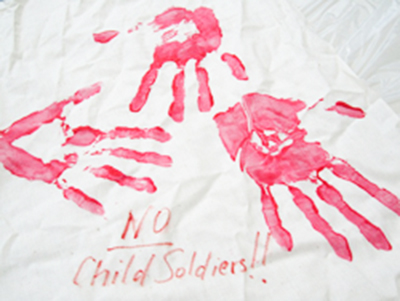 Government leaders from several countries around the world are receiving mail from Presbyterian churches containing prints or paper cut-outs of red hands. It’s part of the Red Hand Campaign — an initiative to encourage countries to stop the practice of turning children into armed soldiers.

“The campaign began on January 11th. We are making a big push for human trafficking awareness, and the use of child soldiers is one form of human trafficking,” said Ryan Smith, director of the Presbyterian Ministry at the United Nations. “Congregations can help us raise awareness by taking a red piece of paper, tracing their hands, cutting them out and sending them to us with a small note.”

UNICEF estimates that as many as 300,000 children under the age of 18 are involved in armed conflict around the world despite international laws that prohibit the practice. Smith says the Red Hand Campaign calls for the universal ratification and enforcement of the Optional Protocol to the Convention on the Rights of the Child on the involvement of children in armed conflict. The protocol was adopted by the UN General Assembly in 2000 and was entered into force in 2002.

“The optional protocol is a commitment that states will not recruit children under 18 to send them into battle,” Smith said. “States should take all possible measures to prevent recruitment, including criminalizing the act.”

Currently, 166 countries have signed and ratified the protocol while 31 have yet to complete the process.

“What we do is take the list of countries that have not fully signed or ratified the protocol and send red hands with an accompanying letter expressing the will of our church for countries to sign on to this,” Smith said. “This is our vision of how God wishes the world to be, but it’s also a justice issue. We do this because it is a just thing to do, but we also do this because we believe it is what God is calling us to do.”

Smith says that some churches will tell the ministry where to send the hands and letters while others ask that they be sent where they are needed most.

For more information about the Red Hand Campaign, visit presbyterianmission.org/ministries/compassion-peace-justice/child/no-child-soldiers.

Submissions may be mailed to:

Working together, across national and religious lines, may we increase God’s love. Amen.