A year of challenge lies ahead 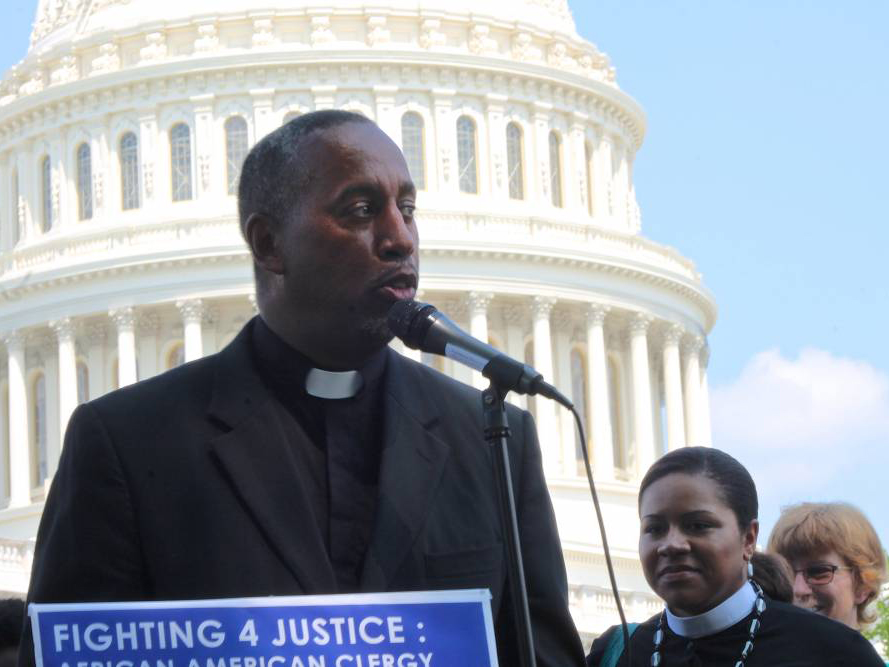 Jimmie Hawkins speaks during a recent news conference with African American clergy on the budget. (Photo by Ray Chen)

The Rev. Jimmie Hawkins packed his bags in early 2017, said goodbye to his North Carolina congregation at Covenant Presbyterian Church in New Hope Presbytery, and made his way to the nation’s capital as the new director of the Presbyterian Mission Agency’s Office of Public Witness. His new appointment coincided with the swearing in of a new U.S. president.

While he says the year has been filled with interesting political twists and turns, he believes it has been productive.

“It’s been empowering for me to see the church’s historic commitment to social justice. The PC(USA) has been one of the leaders, working with its ecumenical partnerships,” Hawkins said. “We are highly respected, especially around issues such as Israel/Palestine. There’s been a lot of conversation about the work we do there.”

Hawkins gives a lot of credit to the OPW staff of three (Catherine Gordon, Nora Leccese and Annette Greer), which works closely on national and international issues. He also credits the changing political landscape with generating interest among Presbyterians about the work in Washington.

“Last year’s CPJ Training Day gave us our largest number of attendees ever. People wanted to talk about advocacy and the response has been tremendous,” he said. “We’re going out, equipping people with the tools to be advocates at the national as well as local level.”

Hawkins has spent a great deal of time making connections both on Capitol Hill and among faith and ecumenical partners in and around D.C. The office has taken part in a number of actions that have mobilized church leaders and other organizations.

“We held a press conference last September, calling Presbyterians to action to become advocates for a moral budget. We are very concerned with what we see as an increase in military spending and a decrease in social network spending,” Hawkins said. “We had a good turnout of church leadership and it was empowering to hear them voice their concerns.”

But he says it’s not only Congress he hopes is listening.

“We go out and challenge congregations to expand the definition of mission. We preach, teach and heal every Sunday. We don’t see advocacy as much as we need to,” he said. “When we talk mission in local congregations, we need to look at short-term ills of society as well as the systemic long-term ills in the community.”

Hawkins says it’s too early to tell if the church is making headway with leaders in Washington, adding that feedback has been mixed. He says he and other ecumenical partners have faced a high level of difficulty connecting with the White House in meaningful conversations.

“I don’t see a real interest on the administration’s part to have conversations with the faith community. The partisan atmosphere is very disheartening,” he said. “I’m hoping that with the 2018 elections, we will see a change, in that people will begin working across the political aisles. This partisan divide is real and I’m concerned.”

Other frustrations, according to Hawkins, include the lack of a progressive agenda on issues such as gun safety.

“There’s very little movement in Congress on this issue even after horrific events as Orlando, Sandy Hook and Las Vegas,” Hawkins said. “Congress is unable to pass significant gun legislation at all and I don’t understand that. They are simply not able to put forth some commonsense measures.”

“We could slowly lose gains we’ve made, and more people will lose health care. And I’m very concerned about an increase in people using emergency rooms as their primary doctors,” he said. “It’s a disgrace we cannot provide adequate health care for a sick child and families stuck with outrageous medical bills. People die unnecessarily because they didn’t have good health care.”

Hawkins says he will spend the next year continuing to find ways to remove barriers between government and the faith community in hopes of engaging in meaningful dialogue.