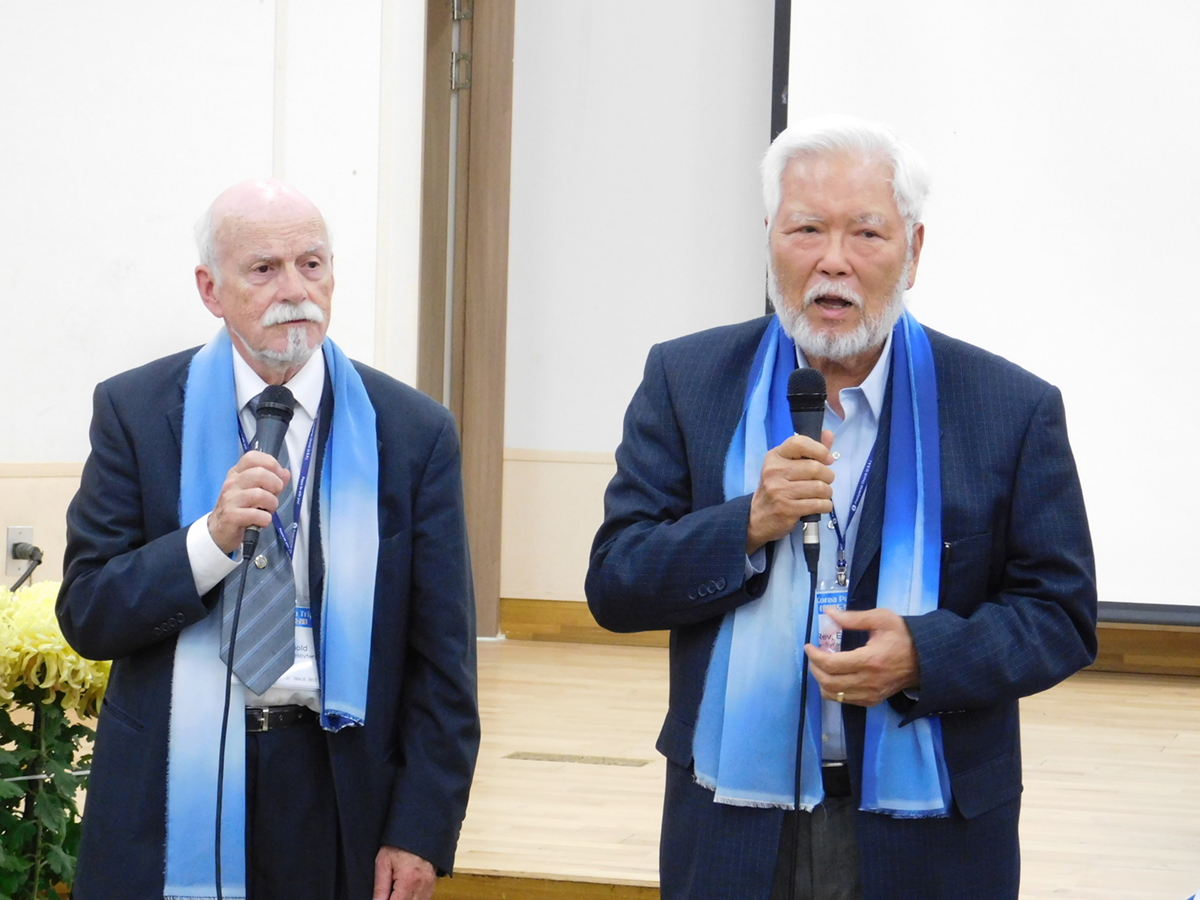 Earl Arnold (left) and Edwin Kang (right), participate in a memorial ceremony at No Gun Ri Peace Park in South Korea in fulfilment of a General Assembly action. (Photo by Kathy Melvin)

NO GUN RI, South Korea — In March 2015, the Rev. Ed Kang and the Rev. Earl Arnold of Cayuga-Syracuse Presbytery visited the No Gun Ri Peace Park, the site of a tragic killing of civilians in the early days of the Korean War. Deeply moved, they vowed to take action. Two years later they returned with the entire Presbyterian Church (U.S.A.) standing alongside them.

“To say we were moved by what we saw at No Gun Ri would be putting it mildly,” said Arnold.

“I returned home with my heart bleeding,” said Kang.

Upon returning to Cayuga-Syracuse Presbytery, they talked with Linda Russell, chair of the presbytery’s partnership committee, who had also been on the trip. She was supportive of their desire to draft an overture for General Assembly. Arnold had been stated clerk for many years and had experience drafting overtures. Kang, who escaped North Korea when he was 16, was the overture advocate. He could speak personally on the issue.

As part of developing the overture, they invited Charles J. Hanley (Associated Press), author of The Bridge at No Gun Ri, to speak to the presbytery. Hanley’s investigation of the events at No Gun Ri won the Pulitzer Prize for Investigative Reporting in 2001. He is widely credited with making the issue public worldwide.

On July 26, 1950, thousands of civilians fled the advancing North Korean Army. U.S. soldiers instructed refugees to walk on the elevated railroad tracks, and subsequently many were killed in strafing attacks by U.S. aircraft.

A group of refugees, mostly women, children and the elderly, sought shelter under the bridge at No Gun Ri. Documents in the peace memorial museum show that U.S. soldiers were told not to let any refugee cross the front line. At first, they were told to fire over civilians’ heads; later the directive came from command to kill everyone. Some of the soldiers interviewed by Hanley said they knew there were women and children in the group, so they fired at the ceiling of the tunnel or aimed to miss. The bullet holes are still visible. It is estimated about 300 refugees were killed after soldiers fired from both sides for nearly three days. 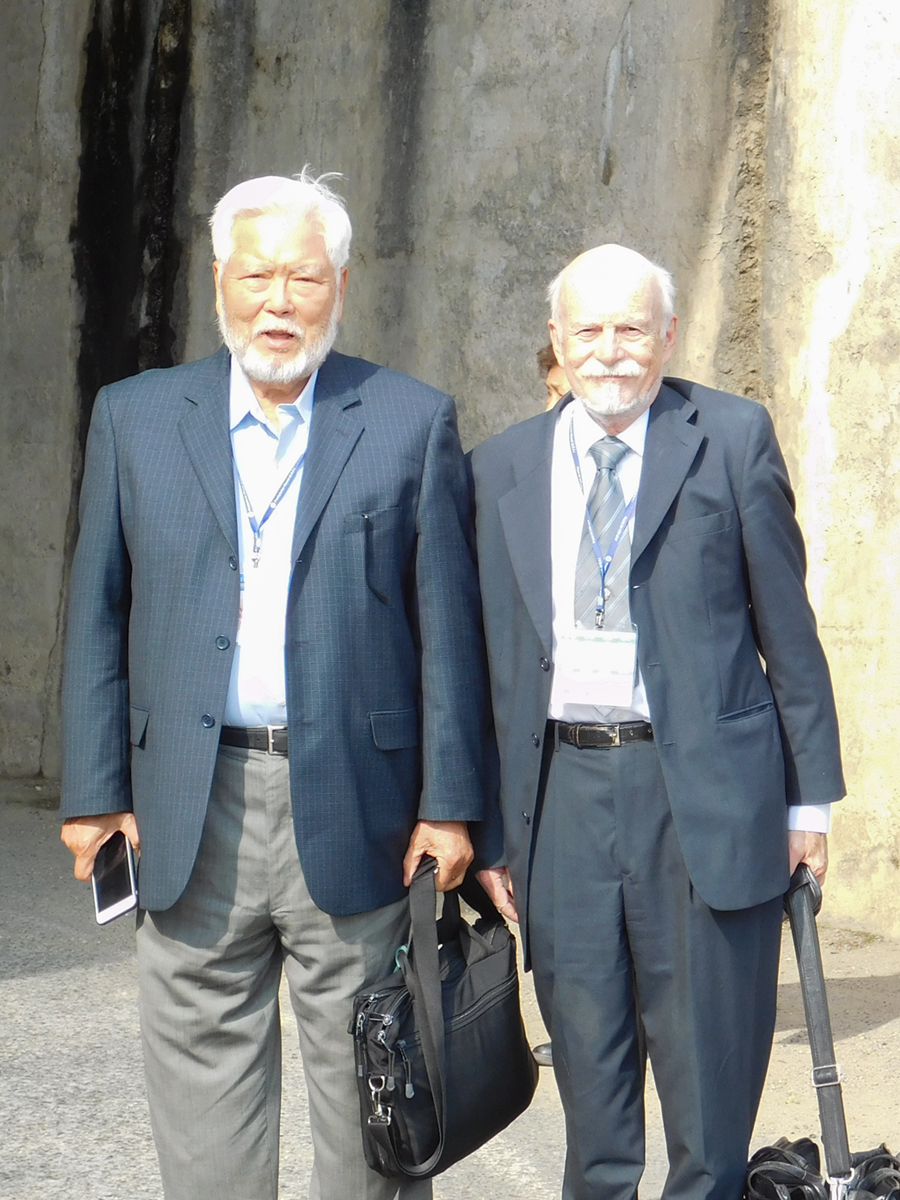 Edwin Kang (left) and Earl Arnold (right), stand in front of the tunnel at No Gun Ri where about 300 died in the early days of the Korean War. (Photo by Kathy Melvin)

No Gun Ri is ranked as the second deadliest attack on civilians carried out by U.S. soldiers. In the massacre at My Lai during the Vietnam War, it is estimated that more than 500 civilians died.

In 2001, President Bill Clinton issued a formal statement about No Gun Ri and offered regrets for the deaths of civilians, but no acknowledgment of U.S. involvement and no formal apology. He did pledge to build a memorial near No Gun Ri and to endow a scholarship as a tribute.

The pastors returned in November (2017) as part of a peace delegation created in response to Overture 12-01 and Commission’s Resolution 12-13 at the 222nd General Assembly (2016) in Portland, focusing on the reunification of the Korean Peninsula and the need to build upon the increasing momentum toward peace.

The peace delegation participated in a service at the No Gun Ri Peace Memorial, attended by survivors and families as well as PC(USA) church partners. Stated Clerk the Rev. Dr. J. Herbert Nelson, II pledged that while the church cannot apologize for the government of the United States, it will be steadfast in its commitment to urge the U.S. government to admit its wrongdoing and to compensate survivors and their families.

A focal point of the ceremony was a long blue and white cloth in front of those assembly called “the river of tears.” Near the end of the service, members of the delegation, Korean church partners, and No Gun Ri survivors and family members took a piece of the cloth and draped it around one another’s neck and exchanged hugs of reconciliation.

For Kang, the experiences at the peace park reminded him of his own escape from Pyongyang, North Korea. On Dec. 7, 1950, he and his father walked south on railroad tracks with other refugees, caught between UN troops and the Chinese. “U.S. airplanes were dropping bombs and strafing and killing them,” he said. “People were crying out, ‘We are not your enemy; we are your friends!’”

He and his father reached Seoul on Christmas Eve, staying in abandoned houses. On Jan. 4, they crossed the frozen Han River, walking toward Taejon. There, he was drafted into the active reserve army. He was 16. After serving in the army, he finished high school and graduated from Soongsil University.

In 1963, Kang came to the U.S. and began attending Union Theological Seminary in Richmond, Virginia. He graduated from seminary and became the first Korean-born pastor ordained in the United Presbyterian Church U.S.A. He went on to pastor several churches. In 1972, he and wife, Mae, became missionaries in Zaire (Congo), then in Japan. Upon returning to the U.S. he joined the staff of National Capital Presbytery in 1989 and retired from the Synod of the Northeast in 2001.

Earl Arnold’s interest in Korea started in the mid-1980s when he worked in the chapel building at Cornell University. In 1996, he was elected stated clerk of the Presbytery of Cayuga-Syracuse and was asked by the Korean Church of Syracuse to preach at the installation of their new pastor. That began a long relationship with the congregation and its pastors. He learned some Korean, although he was never happy with his progress, and created a Bible study course in English for Korean immigrants. In 2014 he met mission co-workers Kurt Esslinger and Hyeyoung Lee, serving in South Korea, and his interest in Korea became stronger.

Arnold and Kang are taking a key leadership role in the development of the Presbyterian Peace Network for Korea. A list of resources about the Korean Peninsula is being developed for the PC(USA) by the Rev. Unzu Lee, working for World Mission’s Asia-Pacific office. Members of the delegation will report on their progress at the 223rd General Assembly  (2018) in St. Louis.

Loving God, open our hearts and minds as we share your love with others. As Jesus healed us, lead us also to heal our neighbors, giving hope that they may be restored. In Jesus’ name, we pray. Amen.