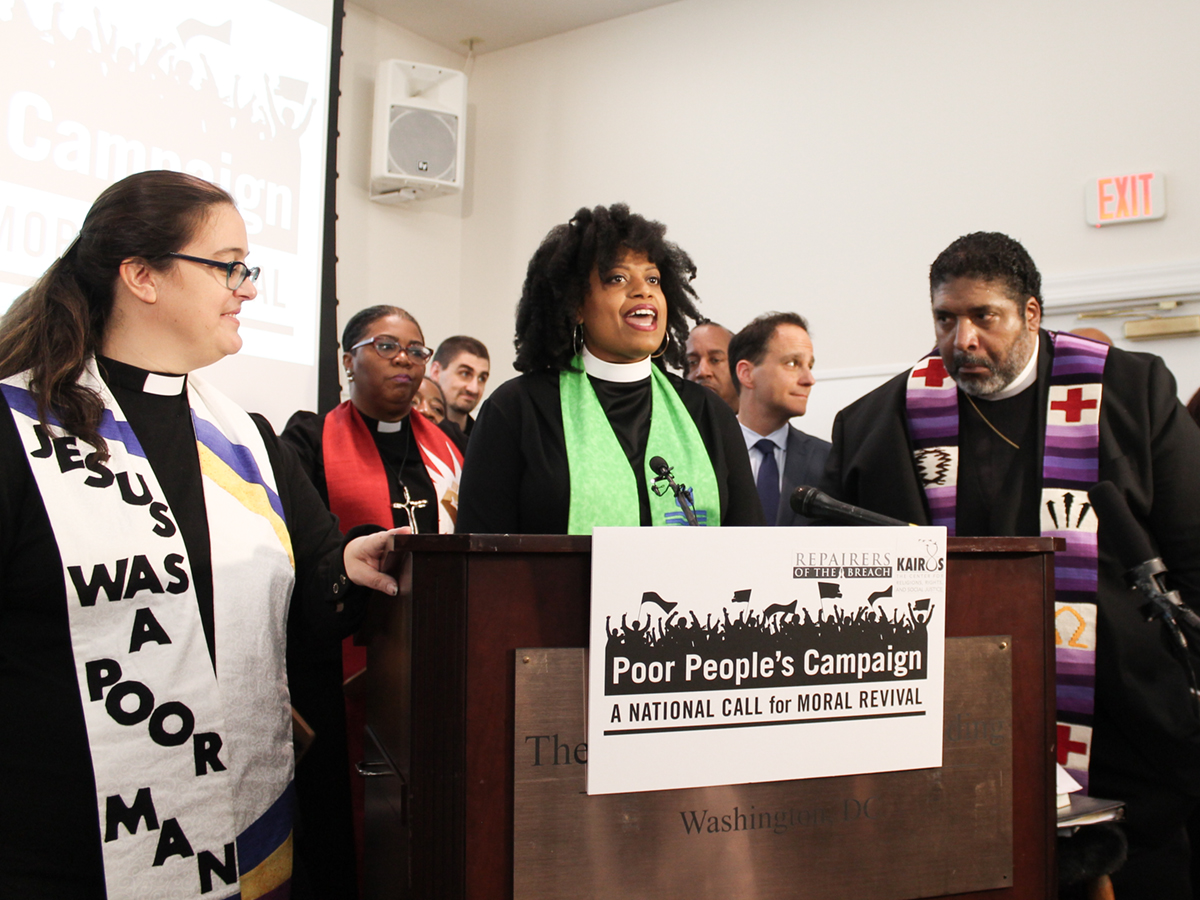 The Rev. T. Denise Anderson, co-moderator of the 222nd General Assembly of the Presbyterian Church (U.S.A.), added her voice to the many faith leaders present for the recent launch of The Poor People’s Campaign: A National Call for Moral Revival in Washington, D.C. Owing its name to the Poor People’s Campaign instituted in 1967 by the Rev. Dr. Martin Luther King Jr., the call seeks to unite “tens of thousands of people across the country to challenge the evils of systemic racism, poverty, the war economy, ecological devastation and the nation’s distorted morality.”

Speaking at the United Methodist Building, home to many denominational justice and advocacy offices, Anderson and leaders from other Christian denominations, the Unitarian-Universalist Association and the Union for Reform Judaism pledged their denominations’ support for the campaign, calling recent legislation — including the tax reform bill — an affront to poor and working-class Americans.

“At our 222nd General Assembly (2016) the PC(USA) made a number of social justice commitments to include measures to dismantle racism, to address climate change and to engage with a new civil rights movement,” she said, noting the overture from the Presbytery of the Cascades that “called on choosing to be a church committed to the gospel of Matthew 25.”

Anderson said the overture “called our denomination to recommit ourselves at all levels of our church to locate ourselves with the poor, to advocate with all of our voice for the poor and to seek opportunities to take risks for and with the poor.”

Campaign organizers are urging poor and disenfranchised people, clergy and moral leaders to engage in direct action at statehouses and the U.S. Capitol this spring as part of the Poor People’s Campaign: A National Call for Moral Revival. Organizers said they will draw on the unfinished work of the 1968 Poor People’s Campaign, reigniting the effort led by civil rights organizations, labor, tenant unions, farm workers, Native American elders and grassroots organizers to foster a moral revolution.

Expected to be a multi-year effort, the Poor People’s Campaign: A National Call for Moral Revival will intensify starting on Mother’s Day 2018, with six weeks of direct action and civil disobedience across at least 25 states and the District of Columbia, leading up to a mass mobilization at the U.S. Capitol June 21. Each week will focus on a different injustice, beginning with child poverty, and will include specific policy goals and a voter education program to advance a moral agenda at the state and federal levels.

“Even before the election of Donald Trump, the evils of systemic racism, poverty, the war economy, ecological devastation and the country’s distorted national morality were tearing apart the social fabric in America,” said the Rev. Dr. Liz Theoharis, an ordained minister in the PC(USA) and the campaign’s co-chair. “But with extremists who stand against voting rights, living wages, health care and immigration reform gaining even more influence today in Washington and in statehouses across the country, the need for this campaign is more urgent than ever.”

The Rev. Dr. William Barber II, campaign co-chair, added, “We must transform the moral narrative in this country. We went through the most expensive presidential campaign in U.S. history in 2016 without a single serious discussion of poverty and systemic racism. Now we are witnessing an emboldened attack on the poor and an exacerbation of systemic racism, ecological devastation and the war economy that demands a response. Black, white, brown red, yellow, young, old, male, female, gay, straight, Christian, Muslim, Jewish and those not of religion but with deep moral convictions must build a long-term, agenda-based movement rooted in nonviolent direct action and voter mobilization. This is not about saving any party, but about saving the soul of America.”

Lord, encourage and empower believers to be your hands and feet and voice in the world.  In Jesus’ name. Amen.