“When the church is awake, justice is done,” says the Rev. Heidi Worthen Gamble.

Gamble serves as mission catalyst for Pacific Presbytery, which worked in conjunction with a Southern California church movement called Matthew 25/Mateo 25 to secure the recent release of a Guatemalan immigrant pastor who had been detained by Immigration and Customs Enforcement (ICE).

Pastor Noe Carias had entered ICE headquarters, accompanied by his wife and children, in late summer. In prior years ICE had given him permission to remain in the United States, but on this day he was carried off in handcuffs to the Adelanto Detention Center.

A small crowd of Matthew 25/Mateo 25 leaders from throughout Southern California and the Presbytery of the Pacific began gathering daily for Spirit-filled prayers in front of the Federal Building and ICE headquarters in Los Angeles to press for Carias’ release.

ICE classified Carias as “a repeat immigration violator who has assumed multiple identities and nationalities over the years in order to evade federal immigration enforcement” when, in fact, Carias came to the United States as a teenager fleeing trauma and violence. 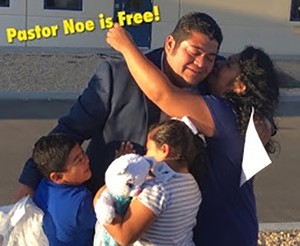 He was kidnapped as a teenager in Guatemala, fled his captors, made his way to the U.S./Mexico border, and after three attempts to cross the border into the U.S., arrived in the United States undocumented. He became a Christian, a pastor, started a construction business, married a U.S. citizen, had two children.

He had a court case pending in regard to his immigration status, as part of a process that takes many years. He was transparent about his undocumented status and went to annual ICE check -ins to receive what is called a stay of removal, or permission to be the United States, from ICE.

Meanwhile, in the detention center, Carias’ health was declining rapidly. He remained hopeful, however, thanking all who advocated on his behalf, saying that he believed “God is going to do something wonderful in this moment.”

Two months after his detention, Carias was released.

“The church is being called to awaken its prophetic voice in this time of deep darkness in our country,” said Gamble. “We have to get over our fear of sounding too political. This is not about partisan politics. This is about saving people’s lives.”

Gamble added: “This is about a courageous gospel witness in a time of fear, hatred and openly racist policies and rhetoric. Christians are called to go outside the walls of our churches and outside our insular ways of thinking, into the streets and into the halls of power on behalf of those whose lives are at stake. This is not an option. We must do this.”

O God, we ask your blessing on those whom you have called. Strengthen them in their service as they strengthen the church through their work. Amen.