Acceptance and forgiveness are important tools in the process of reconciliation

Reconciliation is the active process of healing broken relationships. Many believe coming together for healing is one of the greatest challenges facing our country today. Some believe it can never happen, but after 37 years as a Presbyterian Church (U.S.A.) mission co-worker in Northern Ireland, Doug Baker knows the power of acceptance, forgiveness, and relationship building.

“In order to produce a harvest of peace in any setting, you have to be willing to sow a lot of seeds, knowing that some of them will never take root, some may wither and die, some won’t produce what you had hoped for, but others will produce in ways that are surprisingly powerful,” he says.

Patience and perseverance are essential, he believes, but what is most important is to always trust God’s agenda.

Before the peace agreement in 1998, the people of Northern Ireland were in a cycle of bitterness, resentment, and violence. One of the chronic problems, Baker says, is the length of people’s memories and the storing of grievances.

“The situation in Northern Ireland was characterized by remembered wrongs and unleashing acts of revenge,” he says. “For over 30 years we were in a downward spiral of tit-for-tat killings, all in the name of getting even, paying back what has been done to us. But that cycle never ends.”

One of the ways Baker worked toward reconciliation was by facilitating dozens of small discussion groups of mixed religious or political viewpoints, asking participants simply to listen to one another and ask questions to clarify, not to debate.

“There is a difference between debate and dialogue,” he says. “Generally, open dialogue creates a safe atmosphere in which people can open up and share without feeling defensive or having to overstate their point.” Baker said he remembered one session during which two women spoke calmly about the impact on each of their lives of a relative being killed in the conflict. “Afterwards, a man from the opposite political/religious tradition came to me and said, ‘I live in an area where the paramilitaries who shot those women’s relatives come from. I have never been involved in such activities myself, but I have condoned them thinking they were justified. But listening to those women speak about their relatives and them not being bitter towards my community, I know I have to go back and live differently.’”

Baker believes that “The most important lesson I have learned in all my years in Northern Ireland is about the power of acceptance and forgiveness to break destructive cycles and allow new possibilities to come to life.” 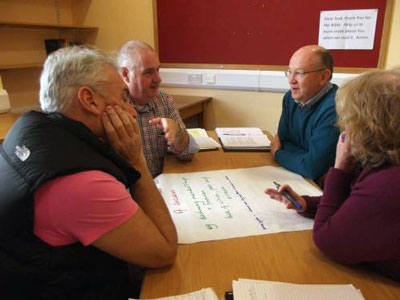 As the Young Adult Volunteer (YAV) Site Coordinator in Northern Ireland, Baker has planted 133 other seeds—through the supervision of YAVs—over 23 years that are still bearing fruit around the world. In addition to working with local congregations, YAVs also spent a part of each week with community projects aimed at addressing the country’s legacy of civil conflict.

Today, 37 of these YAVs are ordained ministers, several are in seminary, 17 are employed in non-ordained positions in the church, 26 are involved in social work, charities, or nonprofits, 18 are teachers, and seven are involved in medical care. The remainder are working in industry, business, law, or are parenting full- or part-time.

Sandra Moon served as a YAV in Northern Ireland during 2005–2006 and currently serves as director of alumni and church relations at the Louisville Presbyterian Theological Seminary.

“Doug has a contagious passion for peace and reconciliation,” she says. “His love and commitment for his work and for Northern Ireland were evident in all that he said and did. Through his guidance and nurturing, my commitment to the church strengthened, and I grew in my faith and understanding of my call to ministry. He has helped to instill in all of us a greater understanding for the need of ongoing peace and reconciliation efforts, not only in Northern Ireland, but to recognize and address those needs in our own communities.” 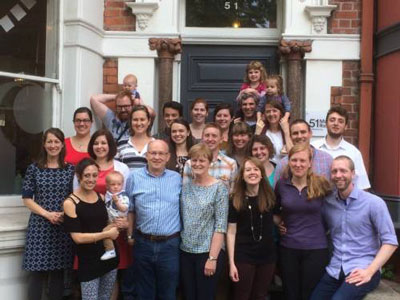 More than 15 current and former YAVs from six different groups surprised Doug and Elaine Baker at a retirement party in Belfast in July 2016. (Photo provided)

The Rev. Patrick Harley, pastor of Ottawa (Ohio) Presbyterian Church, who spent 2011–2012 in Northern Ireland, echoes those sentiments. “My YAV year in Belfast was one of challenge, doubt, and hope,” he says. “My values, convictions, and faith were put to the test over and over again, and it was in the small glimpses through the hard work of faithful people that I was reminded that God is up to something in that ‘wee country.’” Doug was one of those people. We worked for peace and reconciliation … and he embodied it every day in how he cared for and loved his friends and family, his YAVs, and even complete strangers. Doug made peace and hope tactile.”

Like the YAVs he has mentored, Baker experienced Northern Ireland at a formative stage of his life. He was a college student in the summer of 1970 when he was invited to work in Northern Ireland through a program sponsored by University Presbyterian Church in Seattle.

“Being there for a summer stimulated an interest and gave me a deep concern for what the people there were going through,” he says. Eventually he returned to Northern Ireland as a mission co-worker and he has since invested his life in the region. There he met and married Elaine, a former teacher in Belfast who had long been active in reconciliation efforts herself.

Baker graduated from the University of Washington in Seattle in 1972 and received his Master of Divinity degree in 1976 from Princeton Theological Seminary. He served as associate pastor of Trinity Presbyterian Church in Berwyn, Pennsylvania, until his appointment to Ireland. Elaine is a native of Belfast, a member of the Presbyterian Church in Ireland and active in their local congregation.

The Bakers officially retired from mission service on September 30, 2016, but they plan to stay in Northern Ireland and continue their reconciliation efforts through volunteer work.

Gracious God, there is much that needs to be done in our world today. Help each one of us to discern what we can do to meet those needs and to spread your message of healing and hope both far and wide. Amen