Call to action for the Democratic Republic of the Congo

Presbyterians asked to pray, advocate and give in response to crisis

The humanitarian conditions in the conflict-ridden Kasai region of the Democratic Republic of Congo (DRC) have been rapidly deteriorating. The hunger crisis there has deepened, and an estimated 3.2 million people are without reliable access to enough nutritious food.

Almost 1.4 million people have been displaced within the Kasai region or have fled to neighboring Angola to escape the fighting, resulting in a traumatized, vulnerable population. 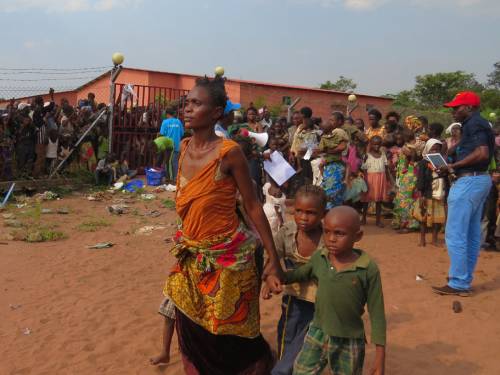 Congolese women and children arrive at a border point in Angola after fleeing militia attacks in the Kasai region of the Democratic Republic of Congo. (Photo by Pulma Rulashe/UNHCR)

In its most recent report on the situation in the DRC, the World Food Program stated, “Most internally displaced families have now missed two consecutive planting seasons. Many of the most vulnerable now eat little more than a meal a day — typically just cassava root and leaves — that is lacking in protein, vitamins and minerals. Survival measures adopted by the displaced include begging, prostitution and the eating of seeds that should be planted.”

The United Nations launched a special humanitarian appeal for the Kasai region this past year, but it remains less than 50 percent funded. United Nations Under-Secretary-General for Humanitarian Affairs and Emergency Relief Coordinator Stephen O’Brien recently said, “The humanitarian community has been working with significantly insufficient financial resources to deliver at the scale required. This is not just insufficient — it is unacceptable for the global community to leave this very real suffering of the Congolese people unaddressed — just because of a shortage of money.”

Presbyterian Church (U.S.A.) partners in Congo are asking us to accompany them in addressing this crisis. The complexity of the situation requires a comprehensive response. The PC(USA) is providing opportunities for members to:

ADVOCATE: In a call to action the PC(USA) Office of Public Witness and Presbyterian Ministry at the United Nations asks Presbyterians to contact Secretary of State Rex Tillerson and urge him to provide leadership in the international community and to press for the global community to fully fund the special humanitarian appeal for the Kasai region.

GIVE: Presbyterian Disaster Assistance is working with Congolese partners to provide farming implements, such as hoes, and open-pollinated seeds to farmers who lost both during the conflict.

Presbyterian World Mission is supporting partners that are training facilitators for Bible-based children’s trauma healing to help children recover from their exposure to extreme violence and escape the cycle of violence.

PRAY: Please lift up the crisis in Congo in your personal prayers and in your congregation.

God of mercy, God of love,

You bear the pain of the world.

Look with compassion on our brothers and sisters in Kasai.

They are suffering so. They have lost so much – their livelihood, dignity, and most of all, hope.

They have endured hunger and sickness, and have been forced to flee their homes and become strangers in another land, imprisoned by the cycle of violence.

Help us to do our part to walk alongside your people in Kasai who are desperately in need. Help us to be the people Jesus can point to and say, “I was hungry and you gave me food, I was thirsty and you gave me something to drink, I was a stranger and you welcomed me, I was naked and you gave me clothing, I was sick and you took care of me.”

May we not look the other way. May the people of Kasai know that they are not alone.

We pray this in the name of the one who bore our suffering.