Peacemaker is working for a unified Korea

The Rev. Moon-Sook Lee is one of 15 International Peacemakers visiting the U.S. this fall 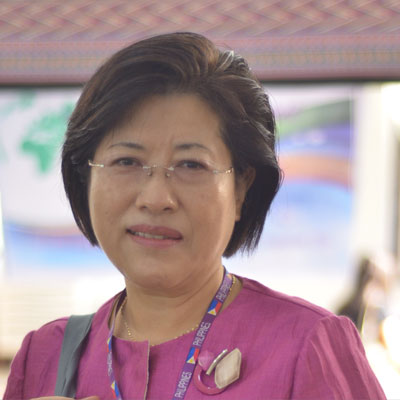 When many South Koreans think of their neighbors to the north, the phrases that come to mind are not so neighborly: “horned monsters” or “a demon to be removed,” writes the Rev. Moon-Sook Lee, who has held several ecumenical and Presbyterian posts in South Korean over the past three decades.

Many of those characterizations come from the generation that fought the Korean War and post-war generations, Lee writes. But her work has given her a different point of view.

“Through our reunification movement, including meetings with people from the North, we have come to realize that the North Korean people are neither monsters nor demons, but they are human beings who have compassion and want peace just like us, but also have legitimate fears from threats to their existence,” Lee writes.

“Frequent meetings and honest dialogue can break prejudices against the other and enhance the prospects of living together with them.”

Lee writes that she has been involved in activities for peace and reunification of the Korean Peninsula since the 1990s, and she will be sharing accounts of that work with congregations and other groups in the United States as one of the Presbyterian Peacemaking Program’s 15 International Peacemakers in September and October.

Lee is currently the executive secretary of the Asian Church Women’s Conference, and from 2001 to 2019 she has served as the general secretary of Korea Church Women United, an ecumenical body of eight mainline Protestant denominations including the Presbyterian Church in the Republic of Korea.

The Presbyterian Church (U.S.A.) has been an active partner in Korean reunification, from joining a National Council of Churches in the U.S.A. statement in 1986 to 2016, when the 222nd General Assembly adopted a resolution unanimously supporting the Korean Peninsula Peace Treaty resolution made that year by the National Council of Churches in Korea.

The Peacemaking Program has worked with Lee before, when she was part of a November 2018 travel study seminar to the Korean Peninsula.

“Rev. Lee shared the story of the Korean ecumenical and Christian women’s movement opposing the U.S.-supported South Korean dictatorship and developing relationships with our North Korean partners, the Korean Christian Federation, that promote reconciliation and peaceful resolution of the Korean War,” PC(USA) mission co-workers the Rev. Kurt Esslinger and Hyeyoung Lee write in an account of that visit.

During her visit in September and October, Lee says she plans to share the story of life on the divided Korean Peninsula, working through churches and civil society groups to extend humanitarian aid to North Korea, women’s roles in peacemaking and what peace means through Jesus Christ.

“I hope that churches and citizens of both countries will become closer in working for peace in the Korean Peninsula, Northeast Asia and the world as well.”

Gracious God, make us humble, use us to serve those in need, and lead us to justice and peace, so that we can be peacemakers wherever we are. Amen.