Board of Pensions church consultant hears call to help 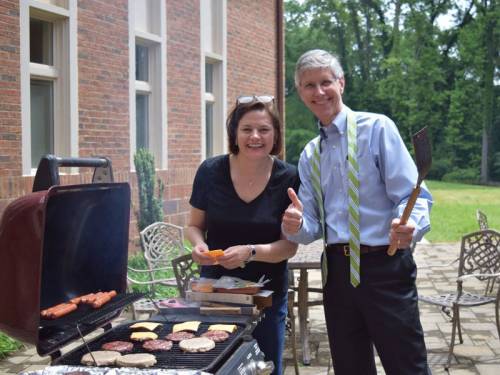 Elizabeth Little, Church Consultant with the Board of Pensions, is based at Union Presbyterian Seminary’s Charlotte campus, where she serves on the Fun Committee. Here she and the Rev. Dr. Richard Boyce, the seminary’s academic dean, grill hamburgers. (Contributed photo)

In a single month, Elizabeth Little vacationed, all expenses paid, at Westin’s resort in Los Cabos, Mexico, as a top sales leader; oversaw a $150,000 bar mitzvah at The Westin Charlotte in North Carolina, as senior catering manager; and took a mission trip to Mexico’s Yucatan, where she slept in a hammock in a village where no child had access to middle school.

The contrasts were jarring.

“I just kept thinking, there has to be something more,” said Little, who has been a church consultant with the Board of Pensions since 2016. “How could I take my hotel experience into the mission world?”

And then, Hurricane Katrina happened.

Little traveled to Mississippi with others from her congregation, First Presbyterian Church of Charlotte, to join recovery efforts. They camped on the floor of an Episcopal church and received their work assignments from a large camp that was “like a little hotel,” she said.

Hotels had been Little’s life. “They just give me energy. There’s something about them,” she said. She had earned a bachelor’s degree in leisure services and recreation administration from the University of North Carolina at Chapel Hill, and then spent 11 years with Walt Disney World Resorts and another seven with the Hilton and Westin chains.

Still, she was looking for that “something more.” One week after that trip to Mississippi, she gave notice at the Westin, and six weeks later headed to Gulfport, Mississippi, to volunteer with Presbyterian Disaster Assistance (PDA). Five months after she arrived, PDA made her a volunteer village coordinator, putting her in charge of six villages housing people doing relief work in Katrina’s wake and a team of Young Adult Volunteers.

When her father died in 2007, Little returned to Charlotte and her mother moved into a retirement home there. Little became the global outreach director for Myers Park Presbyterian Church in Charlotte. While she was there, she led short-term mission trips to Cuba, Congo, El Salvador and Malawi.

She left Myers Park to become a church support associate with the Presbyterian Mission Agency (PMA). Still based in Charlotte, she worked with congregations on the East Coast to build awareness of and raise financial support for the World Mission ministry. 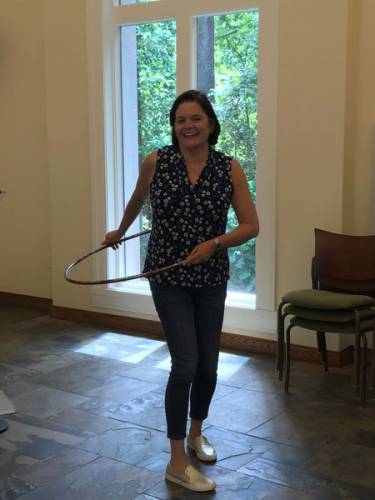 Hula hoops are one way Elizabeth Little has brought more fun to the Union Presbyterian Seminary’s Charlotte campus, where she works as a Church Consultant for the Board of Pensions. (Contributed photo)

Then, at an all-agency meeting of the Church, she “just kept meeting people from the Board of Pensions.” After nearly four years with the PMA, she answered the call to be a church consultant for North Carolina.

Church consultants guide Presbyterian Church (U.S.A.) congregations, helping them identify benefits that fit their budgets and meet the needs of their ministers and employees. “I love my job, and I think it’s the best job in the Church,” Little said. “It’s a privilege to be the face of the Board.”

The Board had selected North Carolina for the pilot of Healthy Pastors, Healthy Congregations (HPHC), and Little launched the pilot program. HPHC, which went national this year, is an innovative financial education program that combines pastor and congregational leader education with grants of up to $10,000 to qualifying pastors.

“When you’re asked to launch something that someone else designed and wrote, you have a little bit of apprehension,” said Little, who’s now a consultant to both South Carolina and North Carolina. “But it was so well-received.” She helped refine HPHC before it became a national program. “To me, it’s one of the best things we’re doing.”

Bringing HPHC to congregations of all sizes has been “a wonderful way to see the Church as the Church,” she said. She meets with congregational leaders, often at night or on weekends because they’re busy during the week with full-time jobs. Little helps them understand the importance of a pastor’s financial well-being to the vitality of a congregation, and how HPHC engenders this well-being.

Her base is Union Presbyterian Seminary in Charlotte, where the Board leases an office. She hadn’t been there long before she helped start a Fun Committee. Recently, they organized a Cinco de Mayo barbecue. “I love the fellowship here,” she said.

Her passion for hotels still burns strong. So, she travels when she can.

Hotels may be “high energy,” but so is she.

Lea Sitton Stanley, Agency Writer at the Board of Pensions

Lord, give us the willingness to love others and let it be the point of sharing our faith intimately with them in deed and in words. Help us to appreciate the least of these in our midst. Amen.