The starter car was already going around the track

Synod of Lakes and Prairies embraces the Matthew 25 invitation 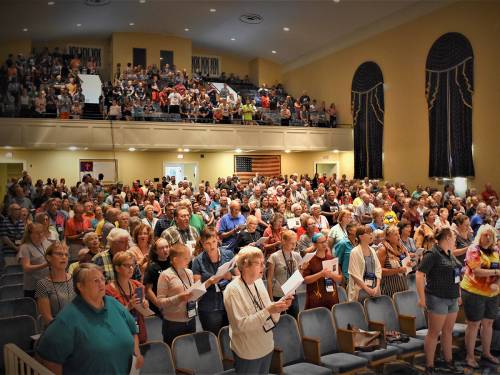 Synod School attendees typically fill Schaller Chapel on the Buena Vista University campus in Storm Lake, Iowa, for one week each July. Synod of Lakes and Prairies officials say Synod School is one way the synod is building congregational vitality within the six-state synod. (Photo by Duane Sweep)

The Synod of Lakes and Prairies is home to 16 presbyteries and nearly 800 churches, all of them in the upper Midwest. One of its presbyteries, Dakota Presbytery, is considered non-geographical but is the oldest presbytery west of the Mississippi River.

“Based on our history, we know that strong, healthy leaders make for strong (worshiping) communities,” said Street-Stewart, the first Native American to be a synod executive in the Presbyterian Church (U.S.A.). “We have to counter the impression this is fly-over land. We want to attract strong leaders and empower them to serve in rural community settings.”

She said Lakes and Prairies’ annual Synod School, the only remaining one in the denomination, creates a weeklong intentional community every July at its longtime home, Buena Vista University in Storm Lake, Iowa.

A lineup of about 70 courses, twice-daily worship and quality keynoters — including the 2017 keynoter, the Rev. Dr. J. Herbert Nelson, II, Stated Clerk of the General Assembly — is “about empowering and sustaining leadership,” she said.

J. Herbert Nelson II speaks during the 2017 Synod School hosted by Synod of the Lakes and Prairies. (Photo provided)

“The 660 or so people who attend every year are from all other the Church, not just our synod,” she said. “When they go home, they feel fed and are full of ideas and energy to tackle ministry.”

As part of its efforts to dismantle structural racism, the synod awards 10 small grants annually to help students attend tribal colleges within the March, Street-Stewart helped teach a course at the annual White Privilege conference in Cedar Rapids, Iowa.

It’s also working to eradicate systemic poverty by partnering with the Presbyterian Committee on the Self-Development of People on projects within the synod’s six states as well as engaging in municipal housing and hunger collaborations.

Street-Stewart said she “also can’t overlook the fact” that the first PC(USA) church to officially accept the Matthew 25 invitation, Olivet Presbyterian Church in Cedar Rapids, is in both the Presbytery of East Iowa and the Synod of Lakes and Prairies.

“The starter car was already going around the track,” she said.

Duane Sweep, the synod’s communications director, said Lakes and Prairies’ five-year strategic plan features three priorities that fit well with the Matthew 25 focus areas. The plan says the synod will partner with its presbyteries to:

Accepting the Matthew 25 invitation “is an opportunity for us to emphasize and expand on those ways we currently work with the marginalized and the impoverished — those in our society who are less well off than they should be,” Sweep said.

The Matthew 25 invitation, he said, “has given us the opportunity to develop a plan like this,” he said. “It’s hard to be a Christian if you don’t do anything but sit around and talk about it.”

“If the synod can make this work,” he said, “I think it will have something really special.”

O Lord, you have called us to be witnesses to your love, grace and mercy to the ends of the earth. Thank you for your Holy Spirit, who gives us the courage and the means to do so. Amen.