Kurt and Hyeyoung return to the USA each March/April. Email them to extend an invitation to your congregation or organization.

In partnership with the Presbyterian Church in the Republic of Korea (PROK), Hyeyoung serves as the Young Adult Volunteer (YAV) site coordinator. As YAVs, U.S. young adults live in various Korean cities for a year at a time while they work with agencies such as peace schools, migrant shelters and multicultural ministries. Hyeyoung helps them immerse themselves in the Korean community and reflect on who God calls us to be. She challenges YAVs to engage the world around them alongside our Korean partners in peacemaking, justice-seeking and ministries that aim to dismantle poverty.

Kurt works with the National Council of Churches in Korea (NCCK) and their Reconciliation and Reunification Department, which maintain a relationship with our partners in North Korea, the Korean Christian Federation (KCF). Kurt is also the coordinator for the Ecumenical Forum for Peace, Reconciliation, and Development Cooperation on the Korean Peninsula (EFK), a forum hosted by the World Council of Churches that facilitates face-to-face meetings between the North Korean KCF and the South Korean NCCK, as well as various other international church and organizational partners. He also helps Hyeyoung with the YAVs.

The Korean peninsula was controlled by Japan from 1910 to 1945. After the defeat of Japan in World War II, the peninsula was divided into two zones. A capitalist–based government was established in the southern region, and a communist-based government was installed in the north. In recent decades, South Korea has become the thirteenth largest economy in the world and is home to large corporations such as Samsung and Hyundai. With almost 32% of the population identifying as Protestant or Catholic, Christianity is the largest faith group in South Korea. Presbyterianism is the largest Protestant tradition. Buddhism is the religious preference of nearly a quarter of the population, and just over 43% of South Koreans claim no religious affiliation. The Presbyterian Church (U.S.A.) began working in Korea more than a century ago, and the PC(USA) has strong partnerships with the Presbyterian Church of Korea and the Presbyterian Church in the Republic of Korea.

About Kurt Esslinger and Hyeyoung Lee

Kurt and Hyeyoung see their mission service as a way to stand in solidarity with marginalized people in South Korea through working for peace and justice, nurturing young people toward a more profound faith experience and contributing to the future of the PC(USA) and — through our denomination — to the future of the world.

Preparing young people for service in the PC(USA) is a hallmark of the YAV program. Approximately one-third of YAV alumni go to seminary to prepare for church-related vocations. Many others serve the church as deacons, elders, youth leaders and church school teachers.

YAVs who serve in Korea benefit from the perspectives Kurt and Hyeyoung bring to the program. Hyeyoung, a South Korea native, is able to interpret Korean society to the YAVs and helps them bridge the cultural divide. As a one-time YAV, Kurt knows firsthand the formative influence YAV service can have on young people.

Kurt’s experience as a YAV prepared him for his role with the NCCK Reconciliation and Unification Department. He says that the YAV Program helped him step across national boundaries to build relationships focused on peace and the well-being of God’s creation, which equipped him to develop relationships with the NCCK in South Korea and the KCF in North Korea. Kurt sees his work as “reverse mission.” He shares lessons he learns from Koreans to equip U.S. citizens to become more effective partners in the work for peace and reconciliation.

For Hyeyoung and Kurt, the call to a church vocation came early in life. Kurt’s call to ministry came when he was a 15-year-old member of a church youth group that modeled unconditional acceptance of diverse people and regarded differences as “gifts from God.” Earning a bachelor’s degree from Austin College in Sherman, TX, then participating in the YAV program and eventually earning a Master of Divinity degree from McCormick Theological Seminary all helped him to develop his calling to a ministry of crossing boundaries of difference.

Before his appointment as a mission co-worker, Kurt was director and campus minister of Agape House Campus Ministry at the University of Illinois at Chicago. He is a member of the Chicago Presbytery.

Hyeyoung was a college sophomore serving as a missionary intern in the Philippines when she sensed God calling her to ministry. In the Philippines, she saw missionaries serving poor and oppressed people “with humble attitudes and loving hearts to let them know that they are children of God.” She says, “To come closer to God, I believe serving the oppressed and vulnerable populations is my calling and will broaden my eyes and heart to see the Kingdom of God in this world.”

Hyeyoung holds a Master of Divinity degree from McCormick as well as a Master of Social Work degree from the University of Chicago. She received an undergraduate degree from Youngnam Theological College and Seminary in South Korea.

Prior to entering mission service, Hyeyoung was director of programs for Korean American Women in Need in Chicago and an adjunct professor at Northeastern Illinois University, where she taught social welfare policy.

Hyeyoung is a member of Lake View Presbyterian Church in Chicago, a congregation that Kurt served as a parish associate.

Both Kurt and Hyeyoung look to Micah 6:8 as a guiding passage for their life and ministry. “He has told you, O mortal, what is good; and what does the Lord require of you but to do justice, and to love kindness and to walk humbly with your God?”

Watch a video of Kurt Esslinger and Hyeyoung Lee 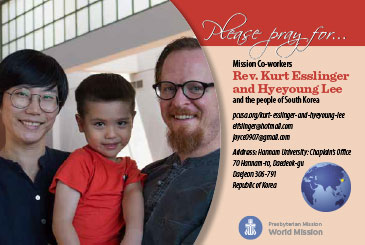 Hyeyoung serves as the Young Adult Volunteer (YAV) site coordinator. As YAVs, U.S. young adults live in various Korean cities for a year at a…