The church is responding to the Syria-Turkey earthquake, GIVE NOW!
Make A Donation Click Here >
Home › Korean Christians advocate for lasting peace on Peninsula 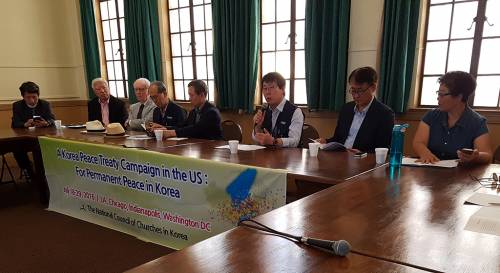 WASHINGTON, D.C. – On July 27, 1953, the guns fell silent on the Korean Peninsula. An armistice brought three years of war to an end, yet a peace treaty has never replaced the ceasefire. Presbyterian Church (U.S.A.) members are invited to join Korean Christians to act for peace by signing a petition and sending an email asking the U.S. government to enter negotiations for a peace treaty.

Despite the armistice, tensions remain between the Republic of Korea (South Korea) and the Democratic People’s Republic of Korea (North Korea). At times the tensions boil over into violent clashes. The continuing conflict diverts precious resources from the welfare of the people on both sides of the Demilitarized Zone.

The Korean Peninsula has known separation and conflict since 1945. The United States holds a special responsibility for a peaceful resolution of the conflict as it occupied the southern part of the peninsula in 1945 and signed the armistice in 1953. The United States maintains a military presence in the Republic of Korea. Joint military exercises fuel the tension with the Democratic People’s Republic of Korea.

Christians in the South and North have been meeting, talking and praying together for an end to the war since the 1980s. PC(USA) ecumenical partners on the Korean Peninsula—the Presbyterian Church of Korea (PCK), the Presbyterian Church in the Republic of Korea (PROK), and the National Council of Churches in Korea (NCCK)— have initiated a Global Campaign for a Korea Peace Treaty to call President Obama and Congress to enter negotiations now to replace the armistice agreement. The Korean Christian Federation of the Democratic People’s Republic of Korea (DPRK) supports the NCCK’s push for a peace treaty.

Presbyterian Mission co-worker Kurt Esslinger is currently traveling in the United States with about 20 Korean pastors and professors to talk about the need to end the war in Korea, sign a peace treaty and forego the dependence on violent means to solve conflicts. The NCCK Korea Peace Treaty Campaign U.S. Tour began July 18 in Los Angeles. After a number of stops across the country, the tour will end in Washington, D.C., and culminate in July 26-28 meetings with representatives of the National Council of the Churches of Christ in the USA (NCCCUSA) and representatives of the U.S. government.

Presbyterians have a long and deep commitment to shared ministry with Christians in Korea. The General Assembly of the PC(USA) has long supported justice, peace and reunification on the Korean Peninsula.

The 222nd General Assembly (2016) urged members of the PC(USA) to participate in the global campaign for a Korean Peace treaty that is being led by the NCCK and NCCCUSA with a goal of delivering 100,000 signatures of U.S. citizens to President Obama on July 27, 2016, the 63rd anniversary of the armistice agreement.