On The Way Church, a Spanish-speaking multicultural 1001 new worshiping community in Atlanta, held a “Pray for Venezuela” day in June for those impacted by that country’s worsening economic and political crisis. 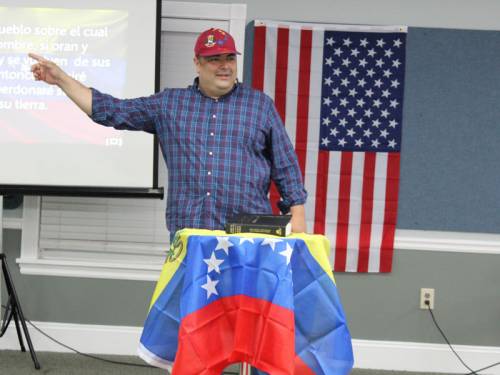 The Rev. Rafael Viana is pastor of On The Way Church, a new worshiping community in Atlanta. (Contributed photo)

Fifty percent of worshipers in the 1001 community are from Venezuela, and daily they receive audio and videos of people in their home country crying out for help. Amid recent blackouts in the country, there is widespread looting. And prices are skyrocketing — the International Monetary Fund predicts a 10 million percent inflation rate in 2019.

“They are in such crisis,” said Adela Guerra, who came to Atlanta and with her daughter Maria and three grandchildren. “In Venezuela I have another daughter and grandchildren. They have no food, school or medicine. I feel deep sadness for not being able to help them.”

With hyperinflation getting worse each week, an estimated 3.4 million Venezuelans have sought refuge — including 5,000 per day in 2018. More than 1 million are in Colombia, and another 500,000 in Peru. About 300,000 are in the United States, according to the U.N. International Organization on Migration.

On The Way members from Brazil, Bolivia, Colombia, El Salvador, Nicaragua, Peru, Puerto Rico and Ukraine want Venezuelan families in their community to know that “their suffering and pain is felt by us,” said On The Way’s pastor, the Rev. Rafael Viana. The church decided to hold the day of prayer, which will feature Venezuelan food, music and décor — and the packing of donation boxes, which will be sent to families in Venezuela. Packed with rechargeable fans, lamps, water treatment tablets, pain relief medication, repellent and food, the boxes have items that Venezuelans need but can’t get because there is no place to buy them in their country.

“Many of our brothers and sisters here are from Maracaibo,” Venezuela’s second-largest city, where temperatures often reach triple digits, says Viana. “Some nights it’s difficult to sleep from the heat and mosquitoes. There is no basic medicine and one of the biggest problems is lack of drinking water.” 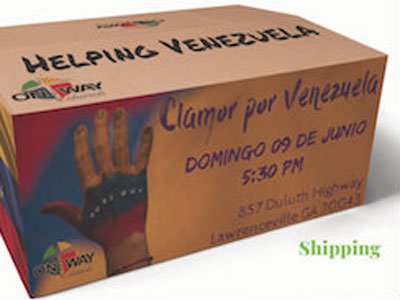 On The Way Church will gather to fill boxes packed with hard-to-get supplies for their brothers and sisters in Venezuela. (Contributed photo)

Omar Duran, the mother of two girls ages 11 and 9, says she can’t talk too much about the crisis in Venezuela because it breaks her heart. She gets out the words “my family” before breaking down in tears.

The father of her children, John Maury, acknowledges that missing family members daily — and knowing they are suffering — is the hardest part of migrating to the U.S.  But unfortunately, he said, his family had no future there.

“We suffered political persecution and threats,” he said. “We had to flee because of it.”

Maury is working hard, moving forward for the sake of his daughters to take advantage of what he calls “the opportunities this great country offers us.”

“The good thing,” he said, “is that we built a new family, not of blood, but of fellowship, a multicultural family made up of many countries. A gift from God through his word and the power of the Holy Spirit.”

Maury was one of nine Venezuelans baptized at On The Way on June 23.

Gracious God, as sisters and brothers come together, we pray that you will wrap your loving arms around each of them as they worship, work and share with one another. In Christ’s name, amen.