San Gabriel Presbyterian Church in Georgetown, Texas, has long supported the work of mission co-workers Jeff and Christi Boyd in the Democratic Republic of Congo. But when the Boyds visited their church and they heard about Congolese children like Serge, they knew they could do more, even with limited resources.

Now he is one of the children supported by funds raised by San Gabriel. Moved to action, the church of 200 in Mission Presbytery with a huge heart for mission has raised nearly $10,000 to send Serge and other vulnerable children to school. The cost for each child is $120 a year. 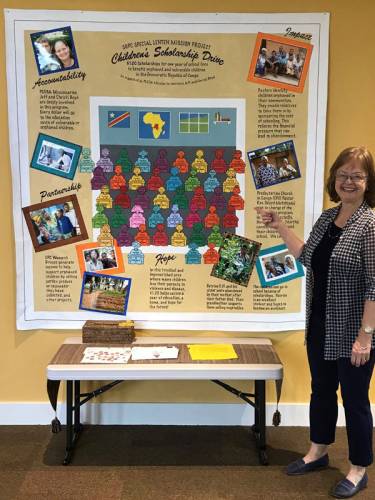 Barbara Hejtmanek, a member of San Gabriel’s mission committee, stands in front of the banner they created for the project. Photo provided

The San Gabriel mission committee presented the project to the congregation at one of the “Mission Sundays” (an extended Minute for Mission). Pastor Bill Pederson supported it with his sermon as well. The Boyds sent photos and stories, and they created a large poster to hang in in the church to highlight the program and to show progress.

“The response was really great,” he said. “We set a ‘stretch goal’ of 30 scholarships (at $120 average) for our congregation, Instead, we raised $9,375 to cover 78 scholarships! Almost everyone wanted to contribute something, including visitors and family members who heard about it.”

Since the early days of Presbyterian mission in Congo, the Church and its partners have ministered to vulnerable children. Two orphanages were initially established; however, the Presbyterian Church in Congo (CPC) has in recent years shifted to more community-based ministries.

It took some time, but Serge is now back with his family, enrolled in school and hoping to finish his education.

It requires a deliberate effort to make this happen and prevent a transitional center from becoming a more permanent residence. Halfway homes need around-the-clock staffing, which drives up operational expenses. And while all the centers receive contributions from congregations in their vicinity, two of the centers receive the bulk of their funds from U.S. congregations.

“Assisting families to help these kids attend school seems to make a real difference as to whether a family member feels they can take a child in,” said Christi Boyd. “The relative may be a grandmother, aunt or uncle. Too often they cannot afford to pay the required school fees. This assistance makes an important difference.” 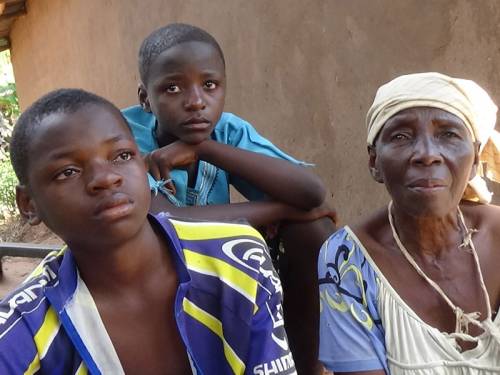 Bashima Kayembe, 84, is raising her grandchildren, Patrice is 15 and Marceline, 13. She turned to Presbyterian Church in Congo to help with school fees. Christi Boyd

Bashima Kayembe, 84, is raising her grandchildren. Patrice is 15 and Marceline is 13. Bashima’s son, the children’s father, died when Patrice was two years old and his sister was six months old. After the death of her husband, the mother abandoned the two children, taking their twin siblings with her. She soon remarried. The grandmother has worked to raise the children by selling cassava (something like a sweet potato) in the marketplace but has not been able to earn enough money to send the children to school. She turned the Presbyterian Church in Congo for help. Thanks to the partnership between the CPC and the PC(USA), the church has been able to sponsor the children.

Christi Boyd has traveled to East Kasai and Katanga, where she has seen the efforts by women’s groups in local congregations to raise money or collectively undertake income-generating activities to meet the nutritional, medical and educational needs of orphans taken in by relatives or other by families in their community. The projects they run include palm nut tree plantations and poultry farms.

“Our ability to support the ministries depends on gifts from congregations like San Gabriel and some individual contributions,” said Boyd. “Some give a one-time gift, although we are also very grateful for those who give each year or even more frequently. Realizing that we’re unable to provide school fees for every child in need, we prioritize those who we have supported but who have not yet completed their basic education cycle. We want to prevent situations where we help a child part of the way, but they are not able to finish primary or secondary school on their own.”

God of all nations and peoples, we pray for those who labor for global peace and security, human rights and dignity, justice and order, and ever-improving standards of life. Amen.