It’s considered the worst humanitarian crisis on the planet today.

In 2018, the United Nations estimated that 14 million people in Yemen were on the brink of starvation. UNICEF estimates that 1.8 million Yemeni children suffer from acute malnutrition. Thirty thousand die each year. 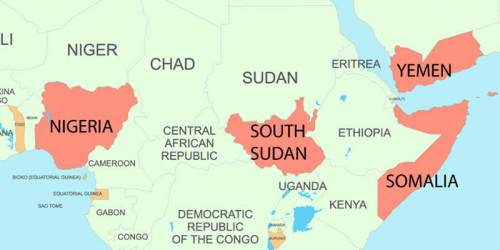 Presbyterians have come through by donating more than $150,000 for famine relief in these African nations.

Earlier this year, the Presbyterian Hunger Program and Presbyterian Disaster Assistance responded to the crisis with funding geared toward providing long-term solutions to hunger and poverty in the mostly Islamic nation. PC(USA)’s Special Offerings ministry asked Presbyterians to help Yemen and three more famine-stricken countries, and they’ve answered the call by donating more than $150,000 to date.

“There are four active famines in the world: Yemen, South Sudan, Nigeria and Somalia,” said Bryce Wiebe, director of PC(USA) Special Offerings. “Presbyterian Hunger Program and Presbyterian Disaster Assistance have been involved through One Great Hour of Sharing, and earlier this year launched a campaign asking Presbyterians to go above and beyond and make the Church’s presence felt in this time of great need.”

The 2019 Fight Famine and Extreme Hunger campaign was a direct appeal asking Presbyterians to prayerfully help alleviate suffering and build resilience for the future in countries devastated by extreme hunger issues.

Nearly one million Somalis have been displaced by severe climate conditions and armed conflict, a key driver in famine-afflicted areas. Abnormally hot, dry conditions early this year have caused widespread crop failure and accelerated the decline in livestock productivity, faster pushing Somali communities into food insecurity. Estimates projected that 2.2 million people would be in severe acute food insecurity by this summer, a 40 percent increase from January.

Conflict-related violence also contributes to South Sudan’s famine. Scorched-earth policies made sure that villages were cleared of livelihoods, and many locals who were able to return to their villages had nothing to return to. Funding from the Presbyterian Mission Agency helps support livelihoods and food security through distribution of seeds, tools, water pumps, fuel, infrastructure rehabilitation and livestock replenishment.

Conflict and violence have exacerbated the situation in Yemen. Two-thirds of its population is currently food insecure, and the dire situation is considered the world’s largest food security crisis. Eighty percent of Yemen’s population, approximately 24 million people, require some form of humanitarian assistance.

“In this season in which famine has reasserted itself, causing suffering and weakening the resilience of people in so many places, it’s inspiring to see Presbyterians come together in support of humanitarian crisis around the world,” said Laurie Kraus, director of Presbyterian Disaster Assistance. “We are grateful for their outpouring of generosity that will enable us to continue our work in these countries where food security and access to clean water continues to create vulnerability. Because of their efforts, we are able extend God’s love by providing our partners with much needed support for their local communities.”

According to Valery Nodem, associate for International Hunger Concerns with the Presbyterian Hunger Program, the PC(USA)’s partners in Nigeria, Somalia, South Sudan and Yemen have been facing dire circumstances since famine was declared almost two years ago. Among key concerns for residents are massive drought, extreme food insecurity, war and other conflicts — and often the feeling that the world isn’t paying enough attention to what is happening.

“We are thrilled to see how quickly Presbyterians were able to mobilize funds to help when called to action,” said Nodem. “Even though the needs are still overwhelming, we feel grateful and motivated to see how generous Presbyterians have been with their gifts. This allows us to continue to support women, children and families in these countries. I think it’s important that the Church continues to show these vulnerable communities that we stand in solidarity with them and that we care.”

“Matthew 25 challenges us to respond as if Christ himself were hungry,” said Wiebe. “Presbyterians’ amazing response to this crisis reflects that it’s the hunger and thirst of people that matter to God, so that’s what matters to us as well.”

Dear Lord, thank you for the gift of food, shelter and home. Challenge us to find ways to extend this gift as we work together to create just, sustainable communities for all. In Jesus’ name we pray. Amen.