Immigrants bring cultural differences that can revive the church

I am an immigrant and a former refugee. I came from Cuba to the United States via Spain in the late ’60s. I belong to that group of people from the “Global South’’ who began migrating to this country by the millions after the liberalization of immigration laws in 1965.

Like previous immigrants, I was thrust into the so-called “melting pot” — a term used to describe “Americanization.” In the 19th and early 20th centuries immigrants were expected to abide by rules created by a society of an English-speaking, white majority with roots in Western and Northern Europe. The U.S. needed the immigrants to provide the workforce to become an industrial giant, but those immigrants had to conform to the ideal of those who owned the factories and mills.

According to Benjamin Schwartz, former literary and national editor for The Atlantic, “Americanization, then, although it did not cleanse the United States of its ethnic minorities, cleansed its minorities of their ethnicity.”

During the late 20th century, black America, descendants of those who came forcibly from Africa as slaves, said, “Enough.” They, too, were expected to conform to the patterns and the behavior of white society, or to be segregated and oppressed.

Today’s immigrants from nonwhite, non-English-speaking countries are following the example of African-Americans. Aided by the ease of transportation and communication with their native countries, new immigrants are proud to maintain their ethnic and cultural heritage. We learn English and abide by the laws. We are grateful we are here, but we do not abandon our languages or our cultures. And we do not abandon the way we express our faith, nor do we expect to be forced into ecclesiastical assimilation. 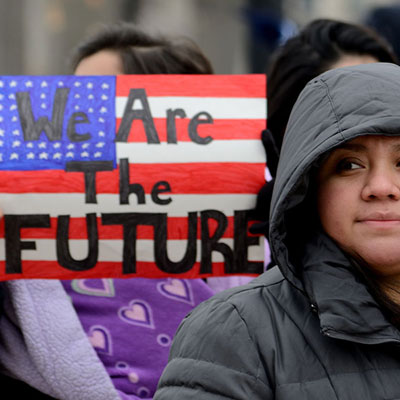 Many immigrants desire to affiliate with our church since some are indeed Presbyterians, the product of our missionary activities in their countries. They’re ready to share with the church their gifts of culture, music and language, as well as their commitment to Jesus Christ. If the Presbyterian Church (U.S.A.) is going to fulfill its calling to reflect God’s creation in all its colorful glory, then the new immigrants present a wonderful challenge as well as an opportunity for ministry.

For example, while individualism still reigns in the U.S., for new immigrants, social rights have precedence over individual rights. How will local church bodies deal with this new type of “connectionism’’? Will the agencies and mid councils be willing to conduct business in languages other than English?

The General Assembly has challenged our denomination to be more intentional about hiring multilingual staff to develop more resources in the native tongues of immigrants. This is a step in the right direction, but hinges on how agencies will prioritize budgets.

Regarding decision-making: Since the Christian world outside the U.S. seeks consensus rather than the majority vote that Presbyterians recognize, how will differences in discernment methodologies influence the way we make decisions? Both the World Council of Churches and the World Communion of Reformed Churches already utilize consensus in their assemblies and meetings.

Finally, what about theological education? Some of our seminaries already have specialized ethnic study programs, but these programs seem to attract primarily students from those ethnic communities. These courses should be part of the core curriculum to help white students learn how to minister in a multicultural world.

A truly intercultural church should reflect the cultures represented in the community of faith in the worship service, as well as in the leadership and decision-making processes. We have a gift from God of people who will energize our church. We have a gift of people with the love for God in Jesus Christ who can transform us into the church God expects us to be.

O God, hep us to know each other and to appreciate the rich cultural diversity that defines our sisters and brothers. Direct us, we pray, as we work together to do your will. Amen.

Revised Common Lectionary Readings for Sunday, January 7, 2018, the Baptism of the Lord (Year B)