Most observers characterized the events as a coup d’état, though the military denied taking power — perhaps in part to forestall intervention by the African Union, whose members are committed to preventing unconstitutional changes of regime.

The church leaders saw the events as a “moment of truth” heralding “a new chapter in the history of our nation.”

“We see the current arrangement as an opportunity for the birth of a new nation,” the statement reads. “Our God created everything out of chaos and we believe something new could emerge out of our situation.”

However, the statement warns that a favorable outcome would depend on properly identifying the source of Zimbabwe’s political malaise. The statement attributes it to a loss of trust in the legitimacy of national institutions and a lack of sufficient separation among the executive, legislative and judicial branches of government.

The clerics’ statement does not blame politicians alone for these failings but argues that all sectors were accountable. 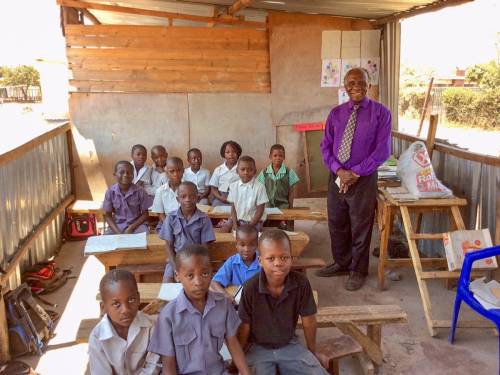 Students at a community school at Norton CCAP, west of Harare, Zimbabwe. (Photo by Doug Tilton)

“All of us at some point failed to play our roles adequately,” the statement says. “The church has lost its prophetic urge driven by personality cults and superstitious approaches to socio-economic and political challenges. Civil society over time has become focused on survival and competition and lost the bigger picture of the total emancipation of the population.”

In response, the church leaders have called Zimbabwe “to a moment of prayer for repentance, deep reflection and … collective and individual discernment on what should be the next direction for us as a nation.” The statement urges people to remain calm, and reminded the Zimbabwe Defense Forces of their responsibility to ensure respect for human rights and dignity.

The statement also cites the need for the establishment of “a transitional government of national unity that will oversee the smooth transition to a free and fair election.” At the same time, the denominational leaders said there was a need for a “National Envisioning Process (NEP) that will capture the aspirations of all the sectors of society.”

“The church alongside other stakeholders in the private sector, academia, and other spheres can establish this NEP as an inclusive space to enable Zimbabweans from all walks of life to contribute towards a democratic transition to the ‘Zimbabwe We Want,’” the leaders recommend.

“God has put the church in the nation so that it can be a conduit for the healing of the nation,” the statement concludes. “We can either take the current situation as a mere crisis to be resolved by a winner-takes-all mentality or we use this as an opportunity for us to find one another to build something that is permanently healing for our nation. The first option spells disaster for us and future generations. The second option allows us to embrace our situation as a Kairos, an opportunity given to us by God to dream together that another Zimbabwe is possible!”

Tens of thousands of Zimbabweans took to the streets last fall to demand that Mugabe step down after 37 years in power. The following day, the ruling party, ZANU-PF, voted to remove Mugabe as its leader, replacing him with former Vice President Emmerson Mnangagwa.

Cautious optimism has been tempered by uncertainty about the military’s role. It is unknown if the military will act impartially to facilitate national dialogue and democratic elections, promote a particular candidate or secure a lasting influence over government and policy.

The entire statement from the Zimbabwe Heads of Christian Denominations is available at https://drive.google.com/file/d/1Ia4vWskEzFhFjKiE_DwXNeVUhYpeKImO/view.

Loving and liberating Jesus, grant us the humility to recognize you in others and to receive the gifts that the Holy Spirit has given to communities and churches of which we know very little. May all of our encounters give witness to your transformative and liberating power. Amen.