In the first six months of a new program to fight hunger, Presbyterians nationwide have responded with commitment and action.

“Presbyterian congregations are tirelessly feeding people, and many are acting to address the root causes of hunger,” said Rebecca Barnes, PHP coordinator. “In response to the covenant launched on June 1, already 72 churches have become Hunger Action Congregations. Thirty-five of those are certified, which means they do activities in all six designated areas.” 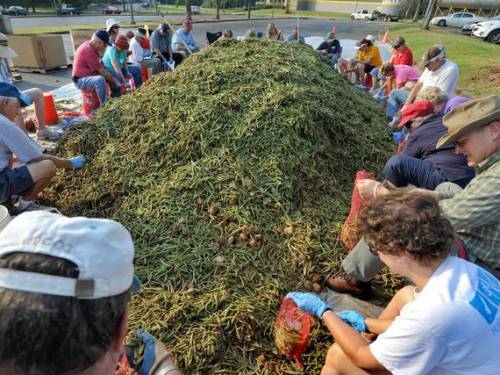 As part of their responses to hunger, Faith Presbyterian Church in Huntsville, Alabama, a 2017 Hunger Action Congregation, works with the Society of St. Andrew and is helping to prepare and distribute this mountain of beans. (Photo courtesy of First Presbyterian Church)

PHP leaders say hunger is still a growing problem in the world.

“The number of hungry people in the world is on the rise again, affecting 815 million people last year — 11 percent of the global population,” said Andrew Kang Bartlett, PHP’s associate for national hunger concerns. “Conflicts, displaced peoples and climate change have contributed to this increase.”

Kang Bartlett credits the work of churches in addressing the issue.

“The good news is faithful people in the U.S. and around the world see addressing hunger and its causes as central to their discipleship,” he said. “Individuals, churches and organizations are realizing that they must join forces if they are to make progress in these challenging times.”

Gracious God, may your sacrificial love on the cross move us to the genuine offering of ourselves in obedient service, for Jesus’ sake. Amen.