Facing racism — a meal at a time

In early 2017, Melanie Rodenbough, a lifelong Presbyterian who lives in North Carolina, learned that the FBI was beginning an investigation after an audio recording of a meeting of conservative activists near Winston-Salem revealed death threats against Muslims living in the area.

Her work with immigrants began in 2012, as she was battling breast cancer. Realizing she might not have forever, she wanted to make a difference with her life.

During this time, the Rev. Dr. Jeff Paschal of Guilford Park Presbyterian Church in Greensboro asked her to begin planning a program on immigration, and he suggested that she invite Presbyterian pastor John Fife to speak. Moderator of the 204th General Assembly (1993), Fife had worked with immigrant ministries in Tucson and co-founded the original Sanctuary Movement in the 1980s.

Paschal met with Max L. Carter, a professor at North Carolina’s Guilford College, and Zane Kuseybi, a man with influential ties in the Muslim community, for a lunch meeting at a local Palestinian restaurant, where members of Guilford Park Church and the Islamic Center met. Later, Christian and Muslim couples from Guilford Park and the Islamic Center agreed to share a meal together at Rodenbough’s home. 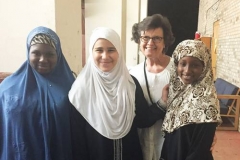 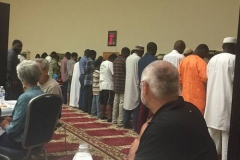 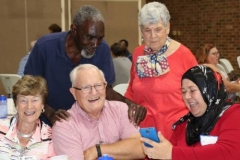 As Muslim and Christian couples sat together in her living room, Rodenbough began reflecting on what had brought them all together.

“We discussed the Bible that night and the Quran,” Rodenbough said. We felt the presence of the Holy Spirit, the confirmation of God leading us. It was lovely.”

By 2015, making friendships with Muslims had become a mission priority for Guilford Park Church. On behalf of its Justice and Peacemaking Committee, Rodenbough invited Amber Khan, a Muslim from Pakistan, to participate in an “Ask a Muslim Anything” discussion.

Rodenbough describes her life as “much richer now” because of her relationships with members of immigrant and Muslim communities in North Carolina.

“They’ve expanded my thinking,” she said. “Having endured much here, they still exude goodness, kindness and hope.”

The Sunday morning after the death threats were made at the 2017 conservative activist gathering, the Justice and Peacemaking Committee invited members of the congregation to write personal notes to people at the Islamic Center.

When Rodenbough told Khan about Guilford Park’s gesture of friendship to those at the Islamic Center, Khan was touched.

“Knowing we are loved during this time of ugliness means a lot for our mental health,” she said.

From late May through June, during the observance of Ramadan, a month marked by fasting to commemorate the first revelation of the Quran, anti-Muslim rallies took place in North Carolina and around the country as the rhetoric intensified.

Again, her committee felt compelled to act. This time they invited members of the Islamic Center to come to a traditional Presbyterian meal — a covered dish supper — to break the Ramadan fast at their church.

“Imagine how our Muslim neighbors feel, how afraid they are for their children,” she wrote to members of the congregation. “Now imagine us inviting them to dinner, with no agenda other than to continue to welcome them and get to know them.”

Muslims from the Islamic Center mosque and Christians from Guilford Park gathered for a meal a few weeks after Ramadan. Together, they rejected the narrative of hate.

For Paschal, the relationship with the Islamic Center means his world has become bigger. His understanding of issues is much more complex. The time spent with Muslims has made him more hopeful.

“Folks act as though the majority of Muslims would be terrorists,” he said. “But there are 1.5 billion Muslims on Earth. The terrorists are falsely claiming they are acting in the name of Islam. It would be just like us believing that the Ku Klux Klan is acting on behalf of all Christians, in the name of Christianity.”

God of love and light, we know that today is a gift from you, and we are ever grateful. As the day begins, we turn to you for all we need. You meet us where we are, and your presence gives us hope and courage to face all that comes to us. Our lives are in your hands, and we trust your spirit to carry us though. In the name of Jesus, we pray. Amen.