Comfort women: the human face of war in Korea

War has a human face. Every shadow, every line, every wrinkle is part of the story.

A PC(USA) peace delegation visited the War and Women’s Human Rights Museum during the group’s recent visit to South Korea. They watched video interviews with “comfort women,” who spoke no English. Although there were English subtitles, they weren’t necessary. The women’s faces said everything.

Estimates are that as many as 200,000 women were kidnapped or lured by the promise of jobs and forced into sexual slavery in “comfort stations” for Japanese soldiers during World War II. Most of the women came from the Korean Peninsula. Some came from other Southeast Asia countries. Some were as young as 14. “Comfort women” became a derogatory term, so they are now known as halmoni, which means grandmother or grandmothers. The handful still living in South Korea are in their 80s and 90s.

The halmoni suffered in silence for many years. Many never returned to Korea. Those who did said nothing, out of shame. Their stories began to emerge with the founding of the Korean Council for Women Drafted for Military Sexual Slavery by Japan in 1990. The halmoni and their supporters began protesting outside the Japanese Embassy in Seoul in 1992. They are asking Japan to acknowledge the crime, make an official apology, provide legal reparation and record the stories in the country’s official history.

In 2011, they held their 1,000th protest. There are still there every Wednesday. 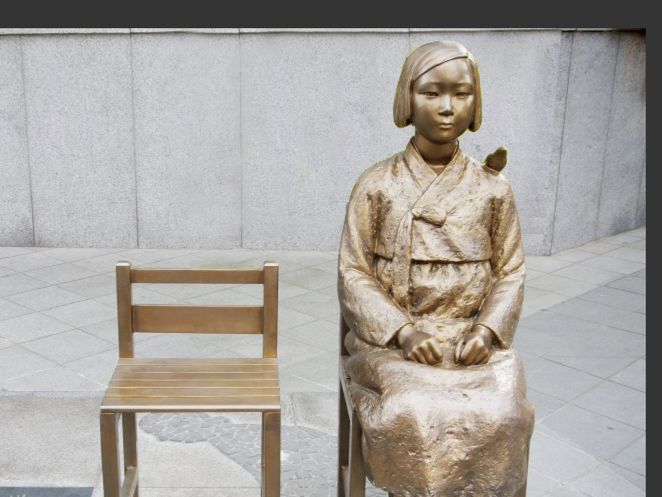 Down an alley in a 30-year-old house west of the city, the history of these women is carefully documented. The space is small, only about 15 rooms and areas, but the impact is powerful. After an introductory video, visitors walk on a gravel road with sounds of cannons and soldiers’ footsteps that lead to a dark basement to simulate the feeling of isolation and oppression the women felt. In another room visitors can follow the history with research materials and video footage. The focal point of the room is a replica of a peace statue that depicts a young girl with an empty chair next to her. The original statue faces the Japanese embassy. Comfort women statues have emerged around the world, including one in San Francisco.

Quantisha Mason, a recent graduate of McCormick Seminary, spent 2013–2014 as a Young Adult Volunteer in Korea. She joined the peace delegation and made her second visit to the museum, which opened in 2012.

“I’ve been here a couple of times and it doesn’t get any easier,” she said. “When we hear about war, it’s always something that men do, but women’s bodies are a battlefield too and the battle is happening in lots of places around the world. I don’t think we can begin to realize the strength it takes to harbor this anger for so many years and remain silent. I don’t know how they lived with it.”

The Rev. Howard Kim, pastor of the Korean Presbyterian Church of South Bay, was born in Korea, but it was his first time at the museum. “I felt strong humility for what had been done and that we can still repeat those kinds of inhumane acts against fellow human beings other places in the world,” he said. “It was sad and depressing.”

The peace delegation traveled to South Korean in response to Overture 12-01 and Commissioner’s Resolution 12-13, adopted at General Assembly 222 (2016) in Portland, focusing on the reunification of the Korean Peninsula and the need to build upon the increasing momentum toward peace.

Leading the delegation was the Rev. Dr. J. Herbert Nelson, II, Stated Clerk of the Office of the General Assembly (OGA). He was joined by the Rev. Jose Luis Casal, director of Presbyterian World Mission; the Rev. Robina Winbush, assistant stated clerk and director of OGA’s office of ecumenical relations, and the Rev. Mienda Uriarte, coordinator of World Mission’s Asia-Pacific office. The Rev. Ed Arnold and the Rev. Ed Kang, members of Cayuga-Syracuse Presbytery and originators of the overture, also attended, along with several OGA and PMA representatives.

Resource materials are currently being developed by the Rev. Unzu Lee and will be available on the PC(USA) website early this year.

God of grace, give us creative ways to serve others, that they would one day claim the hope and joy of abundant life in Christ. Amen.