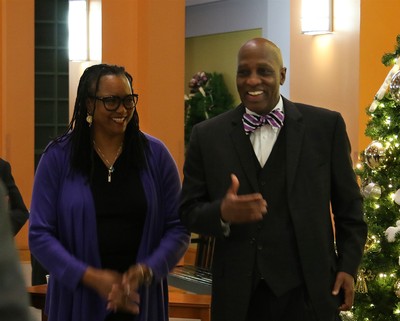 At a recent community reception in his honor, Presbyterian Church (U.S.A.) General Assembly Stated Clerk the Rev. Dr. J. Herbert Nelson, II pledged that “we’re moving out of [the Presbyterian Center] because there’s a need to get out into the community to make partners so people’s lives are better.”

The reception in the Presbyterian Center atrium came some 16 months after Nelson, former director of the church’s Office of Public Witness in Washington, D.C., became the first African-American to be elected to the PC(USA)’s top post. “Thanks for your sustaining prayers,” Nelson told about 150 local church, business and political leaders. “I guess this means you actually think I may be able to do this job,” he said to sustained laughter.

In his call to community partnerships to improve the lives of Louisvillians, Nelson said, “We believe in a God who is greater than all of us, whose grace sustains us. … Let us be about the work of making miracle stories, because we know what God can do. Our journey is driven by faith.”

Barbara Sexton-Smith, the Louisville Metro Council member in whose district the Presbyterian Center sits, welcomed his call to community partnership. “We create a connected community wherever we go,” she said, “and we love doing that together.” 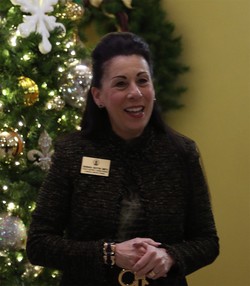 Also present at the reception were representatives from Humana and UPS, two of the largest employers in the city.

Smiling broadly, Nelson said, “When I call, don’t pretend you don’t know me, because we are partners and there is much to do.”

Nelson’s pledge to the Louisville community leaders echoed commitments he has made to leaders in the host cities of the next three General Assemblies — St. Louis (2018), Baltimore (2020) and Columbus, Ohio (2022) — to engage Presbyterians in intensive service-learning opportunities through the Hands & Feet initiative.

“I am thankful to represent this denomination,” Nelson said, “which is blessed by God with grace and glory.”

Creator of peace, heal the conflicts that divide us, and bring us back into that unity of love that reflects your nature, through Jesus Christ our Lord. Amen.