With the same spirit of daring that led them to reinvent their once-dying church, members of The Grove Presbyterian Church in Charlotte are embracing an experiment in fellowship, one relationship at a time.

“Jesus is bringing together people who the world says have nothing in common,” says the Rev. Kate Murphy, The Grove’s pastor. “But we’re in each other’s lives for a reason. We need to know each other’s stories.”

Inspired by the Christian directive to go out in pairs, the church launched the Kuhnekt Initiative in June 2016. The Grove formed twosomes by picking the names of church members out of a bowl. If husbands and wives were paired by chance, their names were thrown back in and matched with someone new.

Each pair was then given simple instructions: At least once a month, share a conversation — for instance, during a meal, an outing, a walk in the park. Discuss your answers to a series of prompts — What’s your deepest hope? What’s God teaching you in your life right now? Learn each other’s life stories — your joys, your challenges, your hopes, your fears. Preserve your budding friendship with a selfie.

So far, 40 church members have participated, in a Presbyterian Church (U.S.A.) congregation that draws 120 on a good Sunday.

As for the initiative’s name, think connect. Except that church member Rebecca Hart lobbied to use the phonetic spelling to grab our attention.

“A little spicier,” she said. 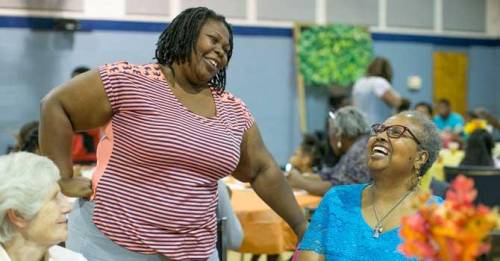 For their first Kuhnekt get-together, Octavia Ramsey and Carolyn Cooper drove to Sam’s Club and began to get to know each other, discovering differences as well as similarities.

Ramsey, 30, is no fan of traditional church hymns. Cooper, 75, loves the old stuff. As they chatted on the way to buy groceries, they laughed about their musical preferences. The more they shared about their lives, the more they appreciated that this journey was taking them from a perfunctory “Hey, how are you?” to a warm “Hey, I know you now.”

“I think you can serve better when you know people you’re serving with,” Ramsey said. “As we get to know each other,” Cooper said, “we find out how similar we are.” On a recent evening, they gathered with Murphy and others in the church gym for The Grove’s monthly community meal, surrounded by a mix of people: black, white, church members and neighbors of all ages. 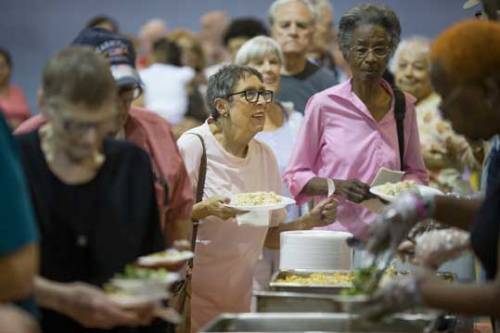 Community meals are part of the church’s commitment to opening its doors to all neighbors.

Outside, a group of young Hispanic men played a pickup game of soccer on the church athletic field.

Inside, adults shared iced tea and conversation while kids ran around. As the dinner wound down, that classic country song by Patsy Cline, by pure chance, played on the PA system, illustrating just how countercultural this whole thing is: “Crazy.”

Murphy, 42, came to The Grove with an interest in urban ministry that was honed in Boston, where she earned master of divinity and master of sacred theology degrees from Boston University, then served as associate pastor at Fourth Presbyterian, a multicultural church in South Boston.

As The Grove’s experiment in fellowship continues to grow, it is gaining attention beyond Charlotte.

The Rev. Laura Everett, executive director of the Massachusetts Council of Churches in Boston, nominated the Kuhnekt Initiative for Leadership Education at Duke Divinity’s Traditioned Innovation Award. Having known Murphy for a dozen years through a Protestant clergy group, Everett has long been struck by Murphy’s vision. 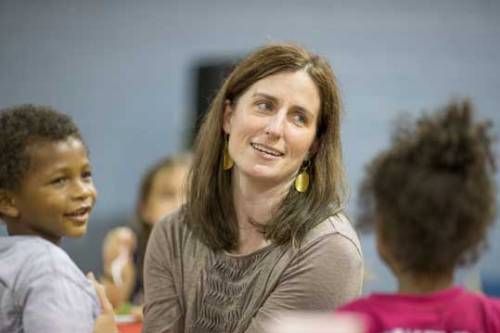 The Rev. Kate Murphy at a community dinner.

“She had the ability to see that The Grove could be and needed to be something more than it was. If that church was going to represent the demographics of the community, they were going to have to change.”

Connecting people two by two, Everett said, is a powerful example of that change. “I think building intentional and beloved community across lines of class and race and differences is a counter witness to all that divides us now.”

But before The Grove could transform the surrounding community through the Kuhnekt Initiative, it had to transform itself.

During the yearlong project, pastors of the 10 churches met with consultants and read several books on leadership. Lay leaders from each congregation participated in discussions. Finally, consultants crafted a detailed “prescription” for change at each church.

Of those 10 churches, one has closed and seven, according to the Charlotte Presbytery, continue to struggle to connect with their communities.

At The Grove, the six-page, single-spaced prescription proposed wholesale changes: change the name of the church, the worship time, the worship music, the leadership structure, the bylaws — and remove the organ from the sanctuary and replace it with video screens.

But the new approach has worked. Worship attendance has more than doubled, to 120, with equal proportions of blacks and whites, and several Hispanic families as well. Beyond membership and attendance, the church has embraced a more inclusive spirit, and has been eager to share it.

Last June, amid a spate of hate crimes nationwide against Muslims, The Grove put up a sign in its front yard, declaring in large, colorful letters: “We love our Muslim neighbors.” After seeing the sign, several Muslim women attended worship at The Grove, then helped serve a Maundy Thursday meal to the congregation the following Holy Week.

Hart, the church member who came up with the Kuhnekt name, said The Grove is driven by a passion to deepen connections. “It’s a choosing to be here, together.”

This story is adapted from an article originally published in Faith & Leadership, a learning resource for Christian leaders and their institutions from Leadership Education at Duke Divinity, and is printed here with permission.

Lord, show us how to be peacemakers in our everyday lives, that others may know your peace. In Jesus’ name, we pray. Amen.