Attendees hear from former detainees as part of two-day event

A two-day faith-based forum on supporting LGBTQ refugees is being praised by those who participated in it. First Presbyterian Church in the City of New York hosted the recent symposium on the challenges facing LGBTQ refugees and asylum seekers. The church worked alongside several ministries within the Presbyterian Church (U.S.A.) to present the event, titled “Love Welcome.”

“I think the flow of the conference went well, grounding people on what is happening and specifically following up with how congregations can truly engage on this issue,” said Ryan D. Smith, director of the Presbyterian Ministry at the United Nations. “Every session was built on the one before it. That was exciting. You could see the progression and the expertise that was getting transferred to folks as the conference continued.” 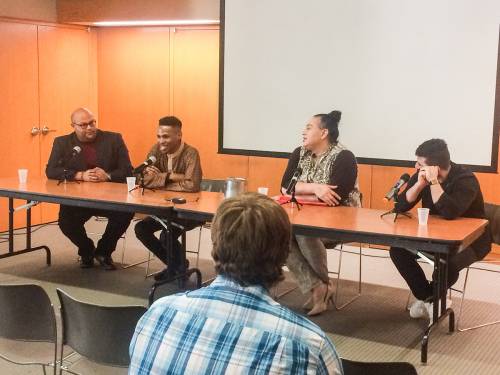 Wilfredo Hernandez, (far left) is an artist, self producing films of LGBTQ immigrants, including asylum seekers. The other panel participants received asylum in the U.S. because of persecution for their sexual orientation. (Photo by Susan Krehbiel)

The symposium included panel discussions on specific needs of the LGBTQ community currently in detention as well as testimonials from individuals who have faced persecution in their own countries. One of the most powerful parts of the symposium, according to organizers, was hearing from former detainees about their experiences.

“It was incredible to hear about their own perseverance through very difficult circumstances, their nervousness when they fled from home about how they might be received by other countries,” said Susan Krehbiel, refugee and asylum catalyst with Presbyterian Disaster Assistance. “Their journey to the U.S. wasn’t always that easy. Even as horrific as detention was, they really had a belief that at some point, they would get out and the U.S. would be a place of welcome.”

A panel of experts took part in the first day of the symposium, allowing attendees to ask questions.

“Participants broke into small groups on the second day. One group looked at how to respond to immigration detention while another group looked at ways to educate their own congregation while yet another focused on developing new church policy,” said Smith.

Smith says the symposium could serve as a model for similar programs throughout the denomination.

“Rather than the national office hosting, this was a good example of several ministries partnered with local congregations, and it was the local congregation that did the driving behind this. The PC(USA) was able to plug in the areas of expertise,” said Smith. “We were able to really serve as a connector to the areas where the national church is the expert.”

Krehbiel said the symposium provided attendees with the knowledge and tools to be proactive in regard to immigrants and refugees.

“They came away with a deeper understanding of the unique challenges refugees encounter when they come to countries like the U.S. and where they can face additional challenges — perhaps rejection, abuse or neglect and isolation,” she said. “They also heard some concrete ways of how they can get involved in this lifesaving work.”

Smith believes the symposium will lead to more action on behalf of churches as a whole.

“Folks are coming out of this excited and ready to work, to take action, whether to volunteer to meet people in detention or write new church policy or engage with their own congregation,” he said. “It wasn’t a case of come, learn and leave.”

The 221st (2014) General Assembly of the PC(USA) adopted a resolution titled “The Global Crisis for LGBT People and their Families: A Presbyterian Church (U.S.A.) Response.” The resolution acknowledged that homosexuality is illegal in many countries and that LGBTQ people face persecution around the world.

First Presbyterian Church in the City of New York Staff

God of all peoples and places, you have called us to offer ourselves as living sacrifices, and so this day we renew that commitment, for your glory. Help to us share your peace and love throughout the world. Amen.