Most Presbyterian Men are grounded in their faith

Then there’s 96-year-old Bob Abrams, who celebrates his birthdays aboard a glider 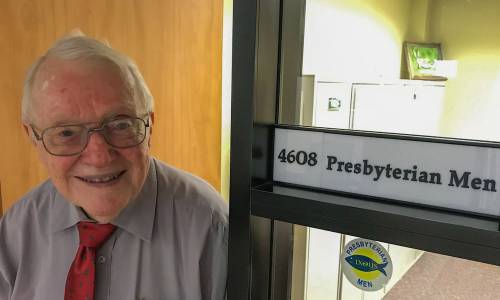 The Rev. Robert “Bob” Abrams has been volunteer coordinator of Presbyterian Men since 2003. (Photo by Tammy Warren)

The Rev. Robert “Bob” W. Abrams brings joy to his colleagues at the Presbyterian Church (U.S.A.) headquarters in Louisville.

At age 96, Abrams, a former mission co-worker who from 1960–64 served World Mission in India alongside his late wife, Wanda, arrives at his office on the fourth floor of the Presbyterian Center two days each week. For the past 16 years, Abrams has volunteered to serve as coordinator of the national office of Presbyterian Men.

“Bob has truly been one who has worked in many areas across the denomination and has an exciting life to share,” the Rev. Dr. J. Herbert Nelson, II, Stated Clerk of the General Assembly, said during a “Coffee with the Clerk” interview with Abrams in 2018. “We give thanks for people like Bob who have lived a life of faithfulness to Almighty God.”

Although it was formally established through a Covenant of Agreement in 1948, the men’s ministry of the PC(USA) has focused on equipping and training all men to pursue the will of Jesus through mission outreach, leadership and discipleship since the late 1800s. Formerly called “Men of the Church” until 2016, Presbyterian Men is a PC(USA) Theology, Formation & Evangelism ministry of the Presbyterian Mission Agency. Presbyterian Men Sunday is recognized on Father’s Day each year.

The same year he accepted the Presbyterian Men coordinator position as an unpaid volunteer, Abrams celebrated his 80th birthday with a glider flight. He’s missed only one birthday flight since then. “The tow plane takes us up to 3,000 feet before releasing the cable,” Abrams said. “Then the tow plane goes to the left, and we go to the right and look for updrafts. The pilot is in the back seat and the student, me, is in the front seat.”

With no engine, the glider falls the entire time — except it falls less when it catches an updraft. If the pilot notices circling hawks, that’s an indicator of an updraft.

When others learn about Abrams’ glider flight birthday tradition, they say, “That takes lot of courage.” He always responds, “It’s a lot of fun.”

“Bob is a wonderful example of a servant of God,” said the Rev. Dr. Ray Jones III, director of Theology, Formation & Evangelism. “He continues to serve the Presbyterian Men with wisdom, faithfulness and grace. I always enjoy his presence.”

Revised Common Lectionary Readings for Sunday, February 23, 2020, the Transfiguration of the Lord (Year A)

Loving God, we pray for the Rev. Robert W. “Bob” Abrams and Presbyterian Men. Thank you for the vision and guidance you give to them. Amen.