It’s a beautiful day in the Presbyterian neighborhood

Though the Presbyterian Church (U.S.A.) is a relatively small denomination compared to Baptists or Methodists, Hollywood has paid plenty of attention to Presbyterian clergy. 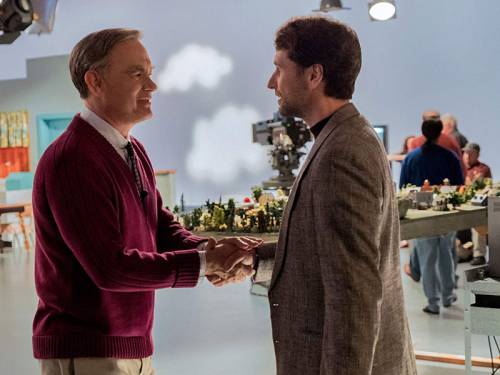 Fred Rogers, played by Tom Hanks, welcomes Lloyd Vogel (Matthew Rhys) to the WQED studio in Pittsburgh in a scene from “A Beautiful Day in the Neighborhood.” (Photo courtesy of TriStar Pictures)

However, the most recent example, “A Beautiful Day in the Neighborhood,” takes little note that Fred Rogers was a Presbyterian minister. There is no mention of God or prayer until the last few minutes of the film.

Scriptwriters Noah Harpster and Micah Fitzerman-Blue, drawing on writer Tom Junod’s 1998 story for Esquire titled “Can You Say…Hero?,” are more interested in Rogers’ extraordinary kindness than in his religion. The result is not a biography of Fred Rogers — for that we already have last year’s delightful documentary “Won’t You Be My Neighbor?” The new film is the story of a relationship and the healing power of friendship, as well as a father-son story.

In New York City, Junod’s name is changed to Lloyd Vogel (played by Matthew Rhys). He has been told by his editor to write a brief profile (about 400 words) for a Hero issue of Esquire magazine.

It is not a good time for Vogel. He is coping with being a new father while at war with his own father (Chris Cooper). Vogel has never gotten over his anger at his father’s abandoning him and his sister when their mother was dying years ago. His bitterness infects his writing as well.

However, Rogers piques the interest of the jaded reporter, and so they have other encounters, mostly in New York. By this time Rogers had ceased production of the “Mister Rogers’ Neighborhood” series and moved on to other projects, some of which were aimed at adults, whose influence he knew could have a great effect upon children. During Fred and wife Joanne Rogers’ frequent visits to Manhattan, where they maintained an apartment for use during business trips, the reporter and the TV host meet several times. Vogel has been told that Fred Rogers is especially drawn to “broken people.”

Rogers at times telephones Vogel, concerned that the man is deeply troubled. In one dramatic encounter he asks if Vogel had a special friend as a child. After a moment or two, Vogel mentions there was a toy rabbit. Enter Fred’s puppets.

Bringing in Joanne Rogers (Maryann Plunkett) helps Lloyd (and us) see Fred not as a “living saint,” but as a man with his own problems that he too struggles with. Hanks, as everyone seems to agree, beautifully captures the essence of Fred Rogers, especially Rogers’ slow-paced, soft-voiced speech and intense concentration as he listens to people. Due credit also must be given to Rhys, who convincingly displays the anger and anguish of Junod. The man may be a famous writer for a top magazine, but Rogers discerns that at heart he is still the angry boy deeply hurt by, and thus resentful of, his father. When Rogers’ agape form of love, so beautifully described by the apostle Paul in 1 Corinthians 13, envelops him, he begins to change as he rediscovers the hurting child buried deeply in himself. A broken man learns that he does not have to stay broken.

Today’s Focus:  A Beautiful Day in the Neighborhood, Mr. Rogers

Good and gracious God, we thank you for Fred Rogers, whose life and story continue to inspire countless others to this day. Amen.