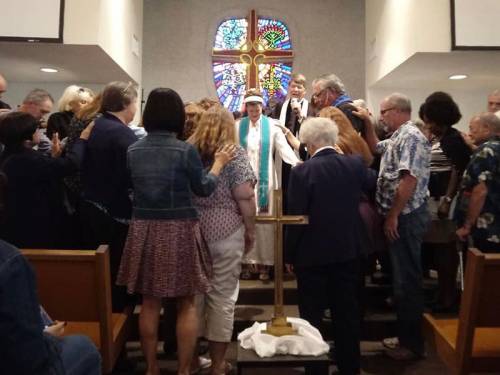 At her lowest point, the Rev. Tamara John cut off her hair and gained 50 pounds.

“Subconsciously, I wanted to make myself look and feel as ugly as possible,” she said.

On the front lines as an RV park minister to the community where she lived in a fifth wheel custom-made RV, John said she was feeling responsible for the loss of a man in her community who had died by suicide.

The man had been a recluse, but John was able to draw him out. As he became more a part of the RV community, he began to thrive and flourish, even coming to worship services. But then the man began to say inappropriate things to her.

Finally, John told him that while she would be there for him spiritually as a pastor, he had to stop making inappropriate comments to her. Eventually the man stopped attending worship services.

One night, after John hadn’t seen him in a while, she felt like something wasn’t right.

She called the RV office to check on him. Then she heard screams and these words: “Tamara, come, come!”

“What I saw and heard was more horrible than I imagined,” she said.

Traumatized, John’s mind began to play tricks on her. Hearing the voices of “look at what you did,” she sank into depression and began to suffer nightmares.

John’s Hope for Life Chapel RV Ministry, which was a ministry of the Presbytery of Los Ranchos, had been rapidly changing. The RV park where she lived no longer had an onsite manager.

Concerned for John, the presbytery asked her to consider how long she could be sustainable as a leader of a frontline ministry, where she had found herself in many unsafe situations over the years, even experiencing death threats.

“They were also concerned that it was no longer financially sustainable as a ministry of the presbytery,” John said.

So, in January 2019, the presbytery closed the RV park ministry. John began to reflect and pray, asking God what an RV ministry might look like. She’d always had a bigger vision for the RV ministry — including taking it nationwide.

“The need in RV parks has never been greater,” she said. “Increasingly the extremely troubled congregate there.”

As she began to talk with churches and organizations, including Christ Presbyterian Church in Lakewood, California, where she would frequently preach, she realized the things she’d learned about ministry in an RV park could be translated to any neighborhood.

Christ Presbyterian Church in Lakewood is a member of ECO, the Covenant Order of Evangelical Presbyterians.

Christ Presbyterian’s supporters of her RV park ministry —  from its beginning in 2011 — had walked through many of the ministry’s ups and downs with her. 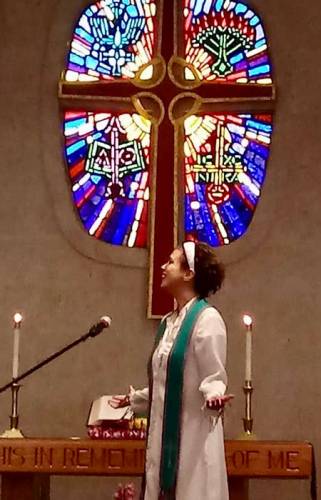 Christ Presbyterian wanted John to become its pastor and help the church reach out to its neighbors. John told the church that she still felt called to reach RV park residents. With RV park residents already in the congregation, church leaders said they’d be willing to help by putting together a team to go to area RV parks to minister. They also agreed to make the RV ministry an outreach of their church.

John accepted their call to be their new pastor. Her installation service was on Oct. 27, Reformation Sunday.

Through all her heartbreak, John says she continues to learn to trust God. Still living in the RV park about 20 miles south of Lakewood, she said the dynamic of her RV park community has changed. Many long-term residents have moved, making way for more vacationers and weekenders. She says it’s as if God needed her to hit the pause button so that the RV ministry could be revamped and restructured.

“I know how to handle myself on the frontline of RV ministry,” she said. “What I haven’t learned is how to disciple others by teaching them how to do what I do.”

At Christ Presbyterian Church, she has the opportunity to learn how to work with a team of people, teaching others how to do what she does — “to disciple them as missionaries,” she said, “so that they can lead others to Jesus Christ in their context and in their spheres of influence.”

Loving God, guide us so that we may be open and able to speak, hear and share your message with each other and with those who have yet to hear it. Amen.